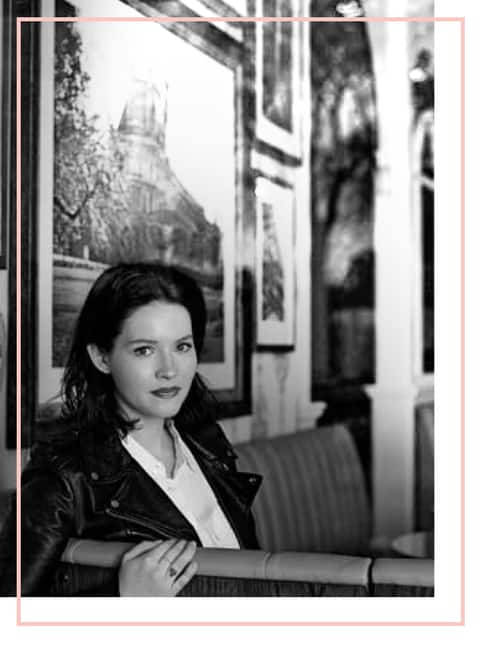 This November, Shedoesthecity celebrated its 10th anniversary, and to mark the occasion, we connected with some of our contributors from the past to find out what they’ve been up to lately, how their careers have evolved, and what they are looking forward to in the future.

Caitlin Agnew is a Toronto-based freelance writer, editor and contributing beauty and digital editor at The Globe and Mail. She’s also a regular contributor to FASHION Magazine and has been published in FLARE, Toronto Star, The Kit, Reader’s Digest, Glow, Cosmetics and Chatelaine and online at xovain, She Does the City and Torontoist.

Prior to freelancing, Caitlin spent four years at FASHION Magazine where she worked her way up the masthead from joining as an editorial intern in 2011. In 2014, Caitlin left the print world to launch W Dish, a digital lifestyle companion to Corus Entertainment’s W Network. Caitlin also lends her voice to custom content for a range of Canadian fashion and beauty brands including Le Château, Aldo, Birks, Sorel and Sears Canada.

SDTC: How did your career in media begin?

CA: It was a roundabout journey that I’d say began in 2007 (same as you!) when I had just finished my MA in German Literature at the University of Toronto and was working as a receptionist at a girls’ private school uptown, an easy enough gig for someone whose mind was always elsewhere (mostly on planning my outfits to wear out on the weekend).

Eventually, I remembered how much I loved magazines and decided that I would become a fashion magazine writer, so I started my own Blogspot where the only things I really remember writing about were Cartier Tank watches and a post in French about my granddad Sam.

Browsing around Craigslist one day looking for writing gigs, I found an ad from a Vancouver fashion website looking for a Toronto correspondent. That was Christie Lohr, who now runs the fashion career platform Style Nine to Five. She let me cover the crazy scene on Queen West, which was something I took very seriously (!!!) and today am so happy I was a part of. I hustled really hard and cold called everybody I could think of, including Jen.

Eventually, I quit my job at the school to intern in the fashion closet at Flare (yes exactly, a closet where I opened boxes of clothes and hung them up on hangers), which was followed by an internship at FASHION Magazine where I lucked out and got my dream job as a magazine editor.

How has your professional life evolved since you first began writing?

The thing I love most about writing is that you can always be better at it, change it, do something differently. As an editor at FASHION for four years, I got to spend my days (and often nights) reading and studying the work of the country’s most talented writers, all of whom I admire so much. The more I read, the more I want to write, so I would say that my professional life has evolved to allow me to focus primarily on writing. I’ve tried to build a career that allows me to write about the people, places and things I come across in my journey that are inspiring or beautiful, and I feel grateful everyday that The Globe and Mail has given me a platform to tell these stories each week.

When you reflect on the past ten years, what are the biggest career lessons that come to mind?

My time at FASHION was so valuable because it was a small company where the people I worked with truly cared about their craft and the end product, so I learned a lot about passion, hard work and respect—you need all of these things if you’re going to survive in media.

I left the magazine in 2014 for a digital editorial job at Corus, a massive company where I learned the hard truth about optics. I’m bad at faking it, so this was an important lesson to learn.

When looking for a way to begin my career as a freelance writer, I was reminded of how critical relationships are. So many people who I had worked with in the past were open and excited to work with me again in this capacity.

What has been a recent discovery or life lesson that has really impacted you?

I keep coming back to this buzzword of authenticity, but it’s a buzzword for a reason because if you can actually harness that, it’s truly powerful. Just yesterday I interviewed Amber Joliat who founded Misfit Studio and she was telling me how she didn’t set out to be different or to build a business around that but just did what came naturally. Now she’s not only running two amazing studios but has created a very special community. The importance of being true to yourself is something I’ve heard from countless people I admire—Amber, Jean Paul Gaultier, Stacy London, Frank Toskan. Always follow your heart!

In your opinion, what are the biggest challenges in the media industry today?

In short, finding a way to monetize compelling, informative, beautiful, expert, “authentic” storytelling and reporting. I constantly worry that, three years from now, the industry won’t need someone like me or won’t even exist—period! Back-up career suggestions are always welcome.

How have you adapted your career to accommodate those challenges?

A shifting landscape means there are always new opportunities. Being a “digital native” has gotten me work managing social media accounts, creating content for e-commerce platforms, even starring in YouTube videos (my interview with super fun Hockey Wife Maripier Morin has 37,000 views!). And I still get to deep dive into those big, meaty print features I love so much. Right now, I’m excited to be doing some writing for cannabis lifestyle brand Tokyo Smoke, because what is more new and promising in Canada right now than the weed biz?

I always try to write stories that I hope expand my readers’ worldview. I grew up in a pretty off-the-grid place in Northern Ontario and turned to reading to satisfy my curiosity about the world—first books, then magazines (I had an Owl subscription and still remember the first time my friend Trina brought a YM to school) and then the Internet. I hope that my work gives readers the same optimism, fantasy and excitement that I still feel when I read a story, and even more so when I get to write one.

If you could go back in time and give your younger self some advice, what would it be?

Have more fun and stop worrying so much about what other people think. And follow your instincts! They’re always right.

What piece of advice, or tip from a mentor, do you think about often that has helped you make decisions about your professional life?

Bernadette Morra, who was my editor-in-chief at FASHION Magazine and a true vision of sophistication, intelligence and grace, once told me I should hone in on a specialty in my writing. It’s something I’m still working on but has helped guide me in my brainstorming and decision making.

What are your hopes or predictions for the media industry at large in the next decade?

I hope that media can play a major role in real social upheaval. We’re poised for some positive change in the world, and I love to see media of all kinds, whether it’s a big-time feature in The New York Times or an honest tweet from someone with twelve followers, breaking down barriers, sparking conversation and connecting people.

What hobbies or passions outside of work currently occupy your time?

When I’m not travelling (my real joie de vivre), I’m working from home on projects I’m emotionally attached to, so there isn’t a lot of division between my professional and personal lives. I was recently at a talk at the AGO with Peaches (a true revolutionary and one of my life’s greatest inspirations) and Sook Yin Lee (another lifelong role model; so cool to watch her career over two decades!) and was really inspired by something they said about connecting with people in person, not just online. That is definitely a priority for me. So is learning things from amazing Canadian women.

When you think back to 2007 and compare to now, how do you think you’ve changed the most?

I wish I had changed more! I still live in the same apartment on Queen West with my beloved dog Oskar and have mostly the same friends, minus a couple of duds and plus a lot of beautiful unicorns. I still make a lot of the same mistakes and am still very naïve and romantic. On the plus side, I think I’m more grounded and have way less FOMO than I did then (all I wanted to do in 2007 was to go to The Social and be in a SDTC gallery!) but am also more guarded and far less interested in Toronto life. Developing a DGAF attitude is pretty liberating.

Jen, in your post about the SDTC anniversary you wrote that you “ended up getting something far better: a strong community of women, and a richly fulfilled and beautiful life.” In 2017, my life didn’t really turn out how I thought it would, but it is so much better! And a big part of that is the community I’ve surrounded myself with. I don’t know what I would do without the colleagues, friends, aestheticians, wellness people (for lack of a better word) who keep me uplifted and smiling. Thank you!