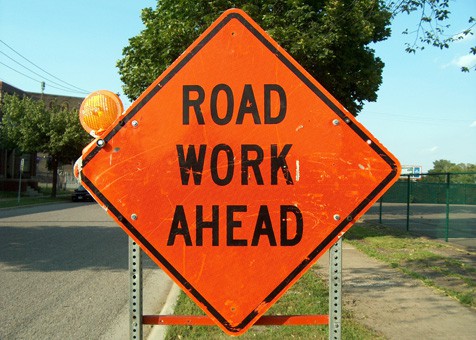 Dirty Boots: What I Learned From The Road

I’m a struggling freelance writer and Master’s student. Like many before me, I have worked just about every job in the book: cashier, lifeguard, shelf stocker, you name it. But the strangest job I have ever taken was the traffic control position on a construction crew.

The hours were rough: up at 5:30 a.m., back at the hotel by 10 p.m., and asleep by 11 p.m. after a quick shower. My first official day on the job started at 7:30 a.m. and involved loading a bunch of road signs and cones into various work vehicles. Around 1 p.m. we stopped for lunch at the Subway attached to our tiny motel, and then took off for another city around 4 p.m. We arrived at our first work site at 7 p.m. The nauseating smell of slaughtered chickens drifted towards us from the nearby Maple Leaf plant, and almost immediately my brand new safety vest and boots were covered in dust and dirt.

Almost 12 hours after we began our day, we started setting up the new construction zone. Of course I had no idea what I was doing yet, so I just did as I was told. Put the cones here, put on this hard hat, hold this “SLOW” sign and stand here. Several hours passed, and I did my best not to look down at my phone every half hour to check the time. Somebody came around to let me go pee about 2 hours in. I couldn’t go between the doors of the truck, so I had to run down into the ditch for a bit more privacy. I had no toilet paper and fumbled around for spare leaves to wipe myself in the dark. We were on a pitch-black highway. I was bored, and a bit delirious. At 11 p.m., we had been working for 16 hours and I was losing my mind. We wouldn’t reach our hotel until 3 a.m. that night. My first day was a labour-intensive 20 hours.

At 3 a.m. I came stumbling up the stairs of the Comfort Inn. I watched an infomercial in a daze as I chowed down on a cold double cheeseburger and fries to soothe my gnawing stomach. “You made it babe,” my boyfriend said, smiling at me, half-awake. He worked as a truck driver on the crew, and had generously dragged my 50+ pound suitcase up the motel steps. I felt the weight of my body hit the bed, beyond thankful for rest, and blacked out.

The next day my boyfriend got assigned to pick up a truck part, and I took the opportunity to bawl my eyes out into about the 10th Subway sandwich I’d had that week. I was already overwhelmed and exhausted. After that job was done, we drove two provinces away to Manitoba, a 16-hour drive. We reached the small town of Grand Rapids, a hot-spot for serious fishers on the edge of an Aboriginal reserve, and learned it was the site of a drive-by shooting the day before. The job after that brought us to a tiny town called Gypsumville, where we camped out in a “motel” that had been abandoned a couple of years before due to a flood. It was opened up for us because there were no other accommodations available for three hours in either direction. For over a month, there were no TVs or Internet, and most of us had no cell reception.

Over the course of the summer I forged unique relationships with my co-workers, most of whom were in their early to mid-20s like me. We were like a travelling family, frequenting whatever dive bars were open, playing slot machines (they are everywhere in Manitoba) and ordering ridiculously cheap beer. One girl I had initially bonded with ended up having a rocky relationship with a 40-something mechanic on the crew, met his 16-year-old daughter, and eventually moved into his house in Alberta after the season was over. I haven’t heard from her since.

The biggest challenge of the job was staying mentally stimulated. It takes discipline to stand all day. The whole time I was there, I listened to talk news radio while plotting my descent upon the Toronto blog scene. Ironically, I ended up accidentally erasing most of the ideas I had typed into my phone, but the seed had been planted nonetheless.

This mundane job spurred my creativity. It forced me to appreciate any free time I had. It forced me to not take things for granted. Now, when I start to get angry that my condo building will be shutting off the hot water for a few hours, I think back to the icy showers at all those Manitoba hotels. If the Internet goes out for a few minutes, I think back to my month of having virtually no way of  connecting with the world outside the road. Even when I start to fret about deadlines, or writer’s block, I think back to open road. In comparison, this is a piece of cake.