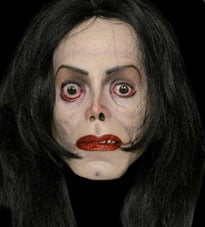 Maybe it’s the orange mystery punch that makes your legs tingle, but there’s something spookily superb about Halloween. Just when nothing seemed scarier than your Thanksgiving leftover family rage, this wicked rules-free slutfest reminds us mere mortals how holidays should be: drug-fuelled, full-mooned (you know what I mean), novelty costume-clad and drenched in fake blood. And what’s even creepier than your Lindsay Lohan costume? This week’s 13 celebrity truths scarier than any spooky Halloween story…

#1) The desperate reality of HDTV on the crypt keeper faces of Wisteria Lane. Also frightening? The three-pound weight gain that transformed Eva Longoria from sexpot to crone, simultaneously killing the buzz on my Sunday night brie cheese fest.

#2) The dead eyes of Mark Jacobs as he was mistaken for a homeless man in a NYC art gallery. That unlucky lost soul will never rock deranged siren performance art as fashion in this town again.

#3) That not-so-fresh feeling from voting in Tuesday’s election. This includes but isn’t limited to the not-so-clever Green vote and the not-so-not-evil Conservative vote, evoking dark ghosts of elections past.

#4) Newsweek’s far-too-close-up of Sarah Palin in the early stages of werewolf transition, as well the caused nightmares invading my nightly Barack Obama sex dream. Load your rifles with silver bullets.

#6) The surprisingly few martinis it takes before I’m genuinely convinced I have witch powers. (Though not technically a celebrity, I am dressed like one, and the mystery punch seems to foster musical talent.)

#7) 15-year-old Disney drone Miley Cyrus successfully publishes her biography – and yet no one will look at your haunting high school memoir of lost love, with witch powers.

#8) Christina Aguilara’s clown whore getup as she crawls from the sewer, or is that the MVAs? Or a London dinner party? Or every other time she leaves her house to frighten unknowing children and snarky gossip columnists.

#9) The wrath of Madonna when Guy Richie vetoed her next baby-buying blood-bathing quest for immortality. Nah, but she does sleep slathered in cream and wrapped in an anti-aging plastic suit. Like you don’t, hater.

#10) Eternal battle of Ugly Sexy refueled as Billy Bob Thorton rams Mulder’s wife and Mulder boinks his 20-year-old tennis instructor. How do these old, dirty pervs pull it off and still manage to turn me on? The truth is out there.

#11) The revived career of pants-dropper Mark Walberg and consequent mystery success of Max Payne based entirely on a SNL skit where he talks to barnyard animals. And just when our fuzzy friends felt safe, Sarah Palin hunted them to quench her thirst for blood.

#12) Katie Holmes’ Broadway premiere Scientology spacesuit, a personal design of her new pretend clothing line. But if anyone can make an outfit from bed sheets and the cobwebs from your holding chamber, it’s my girl Katie.

#13) The walking undead physique of Tara Reid. If the rotting flesh peeling from her zombie-bod isn’t enough for you to rethink your graveyard smash and scare you onto the wagon, then, uh, I dunno… eff the wagon… Happy Halloween!