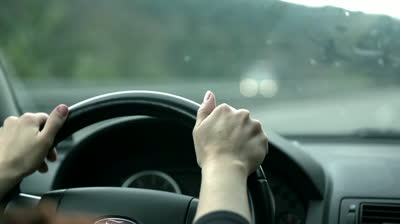 It took me ten years to get my driver’s license

I’ll never forget travelling to take my G2 for the second time. It was a snowy December in Ottawa. I was driving my grandmother’s giant old Buick, complete with blue velvet seats and a huge long nose. I overturned at a busy intersection, and rode the car straight up an enormous snowbank. At that moment, I thought, quite calmly, This car will flip. My Dad, sitting next to me, said, “Just put it in reverse”. I did. The car did not flip. I cried all the rest of the way to the test centre. I pulled myself together. I got my driver’s license.

For many years, I was a nervous driver. As a teenager, the speed of cars really frightened me. We didn’t play video games at home, and so I hadn’t developed the quick reactions and natural insouciance many of my generation did playing racing games on a Nintendo. I frequently referred to cars as ‘death machines’, and didn’t get my learner’s permit till I was 17. The first time I tried to get my G2, I failed (spectacularly) by going too slowly. On the same day, my younger sister passed her test and immediately began commandeering the family car with ease and confidence. I was devastated, and I didn’t bother trying again till I was 21. My fear of the car overwhelmed me, images of destruction coursing through my mind paralyzed me, and to top it off, failing at something that seemed so attainable for most people was really hard to take.

After I finally got my G2, I put the next practical exam out of my mind. I drove when I was at home in Ottawa, and on the occasional out of town trip. Living in downtown Toronto, there was no need for further car adventures. When I received official notice from the government that my G2 license was going to expire forever, and I could choose either to pass my G test or lose my license, I decided to get my G.

I was still wary of the car, but I couldn’t let my license go. I wanted these tests to be over, and I didn’t want to fail. I contacted the Canadian Tire driving school and booked a series of lessons, at vast expense. I took them. I booked a test. I failed spectacularly (for reasons I can’t remember). The kind CT instructor who had come with me drove me home while I tried not to cry. But I did cry. Copiously. My confidence was crushed. I felt like a failure as an adult. It took me two more attempts to get my full license, and when I did, I realised two things: 1. persistent practise over a concentrated period really does make a difference, and 2. I was still just as much of an adult as I was when I woke up that morning.

It’s easy to point to external things and say “This makes me a grown up.” or “This makes me successful”. Licenses, accomplishments, trophies and diplomas can be useful to achieve. They can also become mirages that warp our perspective. There is a reason these things are sometimes referred to as “trappings”.

Now, I can parallel park like a dream. Now, I can change lanes on the highway with ease. Now, I actually look forward to driving cars. And I haven’t driven up a snowbank in years.