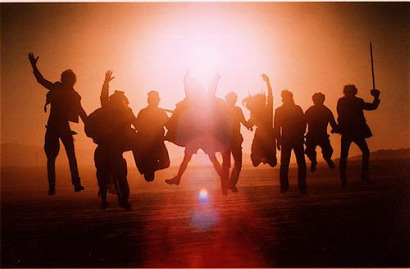 My wait outside of the El Mocambo was a lot longer than it had to be for the Edward Sharpe & The Magnetic Zeros show a couple of nights ago. Heck, I even got there before the opening band of bearded, plaid shirt-wearing Californians made their grand entrance by screeching to a halt onto the Spadina sidewalk. Ohhh right, this is a 19+ show! And with that pleasant realization, the small crowd dispersed for pre-drinks or a quick Chinese food fix at New Ho King.

Fellow Californians Local Natives and Fool’s Gold opened the evening and did a fine job judging by the crowd’s reaction, highlighted for me by the guy beside me endlessly complaining that he had to sit through two opening bands, yet dancing infectiously to each with a big grin on his face. I chose not to call him out on this, though desperately wanted to.

The headliners’ performance was euphoric to say the least. The Magnetic Zeros emerged first before Edward Sharpe (Alex Ebert) made his entrance, looking statuesque and Jesus-like (if Jesus was into wife-beaters, that is). Enlighten us he did, eventually bringing the crowd to their knees during the encore of sing-a-long version of “Brother.” Unfortunately, having only 13 tracks from their debut album “Up From Below” to play, the show wasn’t nearly long enough, though Mr. Ebert more than compensated by sticking around after wards to shake hands and say hello. My boyfriend and I told him we thought it was great that he did this, and he stared deeply into our eyes and replied, “it seemed like the right thing to do.”

The Great Canadian Girlesque Expo ’13 is coming to Toronto

An interview with Conor Lavelle, vocalist/guitarist from Toronto band Fort York, who are crowd-funding to make their second record a reality

An interview with Rosie Blais, lead singer of Enjoy Your Pumas, whose soulful voice has Emily Haines comparisons flying left, right and centre