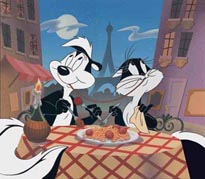 Bonjour, mes petites coquettes! I’m again rounding the six-week mark, and you know what that means: it’s time to do another city—or, fingers crossed, will it do me? Like Brenda and Donna before us, we’re packing our ballet flats and menthol cigarettes for Paris, in search of un vrai experience avec beaucoup des garçons et le fromage. So in fond anticipation, a tribute—and/or scathing critique—of all things Français.

Now I know in my past I’ve had a throbbing hate-on for the damn dirty French—they’ve certainly pumped out their share of bimbos and fancy pants. You just know Napoleon’s a poindexter and I’m really sick of Jean-Jacques Rousseau being better than me. Recent disses include Angelina’s twins for merely being born there and referring to French facial hair as the “disgustashe.”

But three glasses of afternoon wine later, this investigative player-hater got to thinking: if France weren’t awesome, why would Johnny Depp move there?

It’s not all bonnes temps, however: if you ever want to be French kissed again, you’d best lay off the French dressing. The French horn is total balls and just look at the losers from French immersion. Feeling sexy? French knickers—they’re just English bloomers with a sluttier name—and French letters will have you rethinking your last tango (hold the butter, pervert). And don’t get me started on French maids.
Besides sex goddess Bridget Bardot and sex predator Gerard Depardieu, the land of pastries and innuendos boasts the French princess from Braveheart and lil’ stinker Pepé le Pew. Amelie was pretty good, albeit a little too… French. The point is, French women don’t get fat and French men may not be (but probably are) as bad as previously assumed. This Canadian girl in Paris will let you know, n’est-ce pas?

My Mother’s Closet: The Paris Scarf