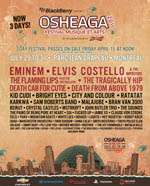 A mere 101 days away, Osheaga announced its line-up last week amid much speculation as to how it was ever going to top last year’s particularly insane Arcade Fire/Weezer/Snoop Dogg triple-header. While this year’s headliners aren’t as awe-inspiring* as last year’s, the rest of the line-up has plenty to get excited about.

For starters, the reunited Death from Above 1979, fresh off their SXSW riot, feel-good indie-folk group Beirut, and Death Cab for Cutie, who will be touring in support of their new album Codes and Keys, out May 31.  Hometown favourites Bran Van 3000, Sam Roberts Band and Malajube round out this year’s newly expanded three-day line-up.

*OK, you can’t fuck with Elvis Costello, but Slim Shady? Last time he came to Montreal he was touring with Limp Bizkit and Papa Roach. Full disclosure: I was at that show. Maybe renting 8 Mile will put me in the mood.