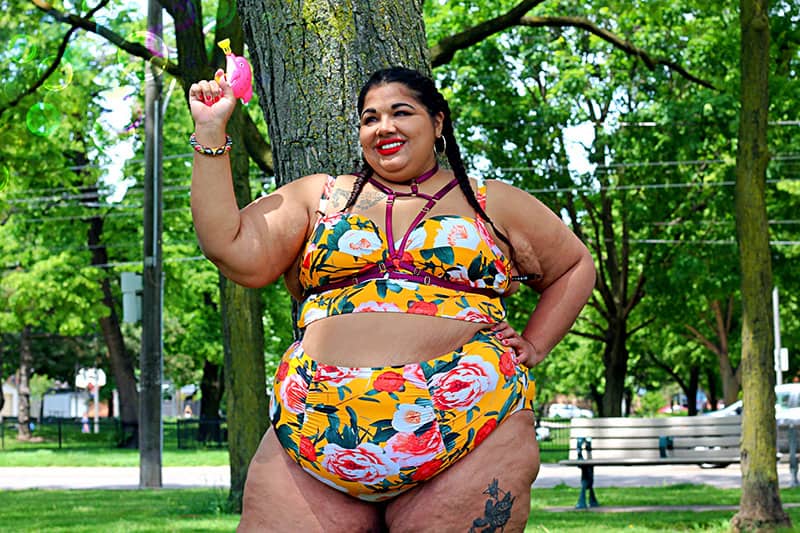 I walked into my ninth grade homeroom class and saw it sitting on my desk; that dreaded orange slip of paper that meant I needed to see the school counsellor. I had spoken to the counsellor before, but it was on my own terms. This meant they wanted to see me about something specific. I snatched the paper up and made my way to her office, grabbing my best friend at the time to come with me.

I’m sure she started with a “Do you know why you’re here?” but I didn’t. She then proceeded to tell me that my homeroom teacher had noticed that I was “looking a little pale and sick lately” and that it looked like I had dropped some weight and that I seemed withdrawn.

I looked down. I could feel her and my friend both staring at me while tears filled my eyes. I mean, it was true. I definitely wasn’t eating as much as I should have been, and it had been going on for a long while.

I broke down and told them everything. I would binge. I would starve myself. I would do sit ups at night and in the morning. I wouldn’t go to bed until I felt hungry and could hear my stomach rumbling. My stomach rumbling was the best sound ever to me. It meant I was doing well in my quest to not eat.

I didn’t believe that it looked like I dropped weight because to me, my body was always huge. The dysmorphia was real.

She told me that we would need to bring my parents in and that she recommended therapy and a dietician at St. Joe’s Sister Margaret Smith Centre.

I relented. I knew what I was doing was not sustainable. I was stuck.

I know when it started. That fear. I was in fifth grade. We just received our class picture, and I looked at myself, sitting in the front row, smiling in my pink dress. My calves were rounding out and I knew at that moment that I was going to be fat.

I come from a long line of big ladies. The relationship between Indigenous people and the food we eat now is a tricky one. We didn’t eat well in my family, so that didn’t help my situation. By the time I had fully hit puberty, I had filled out. I can look back at pictures now and see a chubby girl or a girl with some meat on her bones, but at that time, in that moment, I was big and fat, and fat was a bad word.

Then the bullying began. Mostly on the school bus from the reserve. Let me just say this: Kids are cruel. They can be the meanest little bastards you’ve ever met. And it took me time to understand that they’re cruel for a reason, but in those moments, on that bus, it didn’t matter why.

“What’s weighing down the front of the bus? Oh, it’s Yolanda.”
“Elephantitus!”
“Why do you two fat cunts sit in the same seat all the time?” That one was asked to both my sister and me, as she endured the same punishment I did.

There aren’t enough words to describe just how much I hated my body. I started wearing baggier clothing, in hopes that it would cover me up more. I never wore shorts or tank tops in public. I began to give my lunches away to the boys in my class. I skipped breakfast. Oftentimes dinner. I couldn’t stand being around people eating. Watching people shove food into their mouths and chew was the most disgusting thing to me. I hated throwing up so I rarely purged, but I would try and force myself to go to the bathroom. I would eat very little when I was at friends’ places.

And then, of course, I would binge. The hunger would get to me and I would shove chocolate and chips and granola bars and pudding in my face to unhealthy amounts. Then guilt would hit and the cycle would start all over again. This was all before I was even fourteen years old.

I remember in eighth grade, it really started to get to me. I was sick a lot as my immune system was way low. My teacher had asked me to point out a volcano on the wall. The dizziness hit me as soon as I stood up and everything blurred. I could hear my teacher, but he sounded far away. I tried to focus on the pictures of the volcanos…which one is…he…talking…about?

The next thing I knew, I was stumbling over a chair about to fall over. I said I wasn’t feeling well, so my teacher had two of my classmates take me to the washroom. I slid down the wall to the floor, shivering and pale. The school called my mom and she came and picked me up.

I was lying on the couch, when my stepdad came in and gruffly asked me what was wrong and why I was home from school. I explained my symptoms and he immediately flew into a rage about me being on drugs.

“I’m not on drugs! I’m sick,” I kept saying, but he was adamant that I was high. I don’t know if he ever believed me. He accused me of being on drugs a lot.

Entering high school was hard although I did attempt to reinvent myself. Gone were the baggy clothes. My grade eight grad dress was sleeveless. My friend convinced me that I looked great in it, and it was one of the first times I believed that. I did look great in it. So, I decided to try a new style. It being the mid-nineties, baggy jeans and short tops and chain wallets were the thing. Baby doll dresses and big black boots. 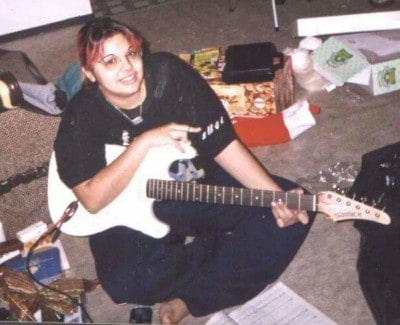 I was moody, I was broody, I was creative, and I had an eating disorder. But it didn’t matter how much I changed my style; bullies are going to be bullies.

The jocks in the school would make elephant noises as I walked by. They would talk to me on the phone at home but would ignore me in the halls. I was always good enough to talk to but never good enough to be seen with.

That carried into my twenties. My relationship with food was, and is, a troubled one. My weight fluctuated. Sometimes I would try to do the gym thing. Then I would give up and get stuck in my apartment all day.

Even on the days when I would feel cute out in public, I would hear, “Fat bitch!” “Why don’t you eat another bag of chips and see how much fatter you’ll get?”

I wasn’t allowed to exist in the world without having insults hurled at me. I had struggled with mental illness as a young person, and it just grew and grew to be more invasive and dangerous. The battle with my body and the world’s perception of what it should look like added significantly to an already troubled mind.

I started theatre school when I was thirty. Being in that program provided something different. I was physically active. I had to eat somewhat well in order to stay healthy so I could maintain a conservative-style program. The fat was melting off of me. I was at my goal weight. But, of course, I still wasn’t happy. It wasn’t enough. I still hated myself. And when school ended, I gained all the weight back.

Something did happen though: I began to find remnants of self-love through the people around me and from the body acceptance movement that began to rise. Plus-sized models started becoming recognizable. The clothing became one hundred times more stylish–although incredibly overpriced.

There is something called thin privilege, and it’s very real. If you can walk into almost any store and something in that store can fit you, or you can pay under $40 or $50 for a bra, that is thin privilege. And I’m not even really sold on that term, but it’s definitely body privilege. It’s ridiculous that I have to pay hundreds of dollars more for clothing because of my size.

One day, my friend Liz suggested that I wear a crop top. She offered to cut the bottom off for me. I was nervous, but I let her do it and paired it with a sequinned skirt and small coat. I looked at myself. I really looked at myself. I felt sexy. I felt desirable. It was the first moment where I saw my body beyond being ugly and disgusting. There was a reclamation in that moment, and there was no going back.

This past summer, I was asked to do a Pride photo shoot for my friend Deb’s lingerie line, Panther Daze. I would be in a bikini, in a harness in a park, getting my photo taken. I was excited and absolutely terrified. I have had moments of fun, sexy photos being taken, but this was something else. But it felt free to prance around in a bikini in a park on King street, waving a Pride flag around. I also walked a runway show for them and felt like an absolute goddess.

I struggle almost every day with not feeling worthy, with not feeling sexy, with loving my body. I have an uneasy relationship with food. I have digestive problems. I lose and gain weight. I have a fat ass and thighs that I’ve learned to appreciate, but only because other people do. I have a double stomach that will never be flat, and that’s okay. And not that it’s anybody’s business, because it shouldn’t matter, but I’m physically healthy in terms of being a fat woman of my age.

The point is, loving your body is hard in this society. We’re all trying our best. People still feel the need to stop me on the street to comment on how fat I am and how they have solutions for me. But the truth is, I’m worthy and valid just the way I am—fat and all—and I may have to keep saying that to myself for the rest of my life, but it sure beats starving myself. Fat is not a bad word.