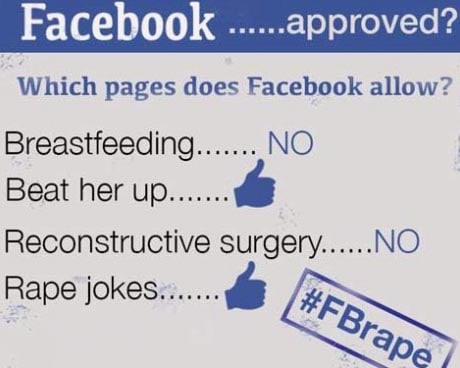 "It’s really not that complicated. Rape and violence against women are wrong."
Events & Culture

The #FBrape campaign was a success, but Facebook’s statement still leaves a lot to be desired

"It’s really not that complicated. Rape and violence against women are wrong."

As an admitted Facebook addict, I have to acknowledge that I’ve been aware of some of Facebook’s unsavoury practices and policies for a while now. For years I’ve heard about the way Facebook would almost immediately take down pictures of breastfeeding women because they felt it was on par with pornography; I also heard about the numerous “humour” pages that featured offensive images and jokes about rape, and the fact that despite numerous reports from users, Facebook refused to take them down. I had never seen any of these pages, but the reports were enough to make my stomach turn.

And yet what could I, or any woman, do? Well, just one week ago, a group of women (most notably Laura Bates of The Everyday Sexism Project, writer and activist Soraya Chemaly, and Jaclyn Friedman of Women, Action & the Media) started the #FBrape campaign. They wrote an open letter to Facebook urging the website to “recognize speech that glorifies or trivializes violence against girls and women as hate speech” and to take down all images and pages that contain such content. They also wisely warned Facebook that they would be using the hashtag #FBrape to inform the companies that advertise on Facebook about this content, and to urge them to withdraw their advertising dollars until action was taken.

After one week, 60,000 tweets, 5,000 emails, and a growing number of companies expressing their disgust, Facebook released a statement saying that it would be changing its policies.

However, their statement still leaves a lot to be desired. Facebook admits that they often allow offensive images to be posted under the guise of “distasteful humour.” And while they will review and update the guidelines used by their team to determine what is hate speech and what isn’t, they may still leave up pages that are “cruel or insensitive” but not actionable. The statement went on to say that one of the tactics they would be taking is insisting that the authors of offensive pages “stand behind the content they create.” In other words, if Facebook doesn’t take down an image of a badly beaten women paired with some joke about making a sandwich, they are hoping that users will take action. The statement claims that users will be able to hold the original creator accountable and object directly to the content. But isn’t that what the “report” button was for all along?

Several parts of Facebook’s message are conveniently vague. There is talk of opening the lines of communication and soliciting advice from women’s groups, but there is still an underlying tone that their main concern is freedom of speech and not taking down violent and misogynistic images. Facebook’s message ends by claiming that “these are  complicated challenges and raise complex issues.”

But as so many Facebook users have pointed out, it’s really not that complicated. Rape and violence against women are wrong. Images and pages that trivialize or glorify these actions should be banned. Only time will tell if Mark Zuckerberg has truly received our message.

We also wrote about this topic on Shedoesthecity Teen. Read it here.