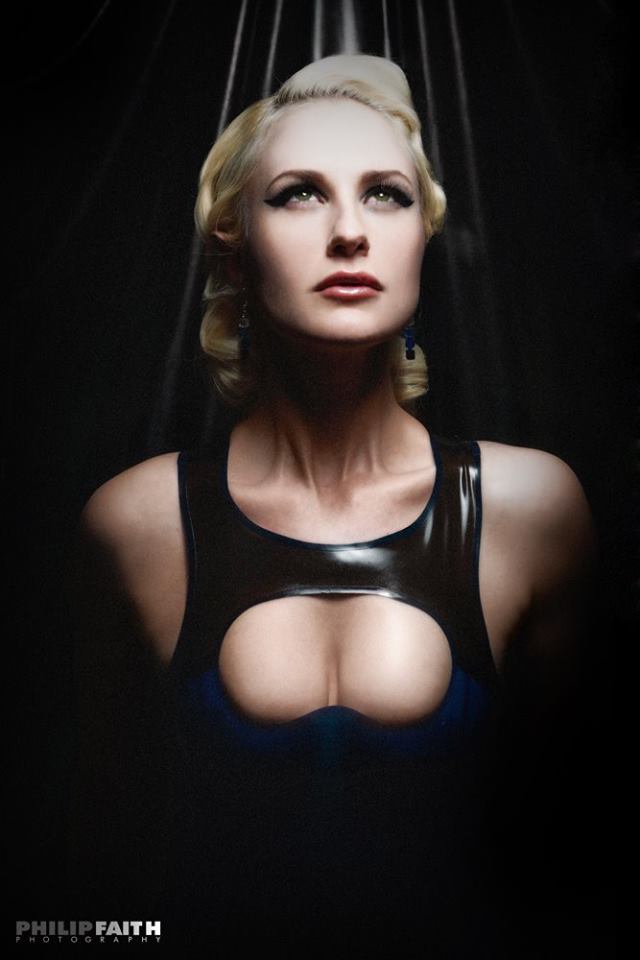 She might as well have a Ph.D in baring it all; Jessi Van Miinx is Toronto’s rising alternative model starlet, and she’s taking over the modeling and alternative scenes with her brazen looks, her outspoken feminism, her ambition and sharp smarts. You may have seen her in Chinatown or at Yonge and Dundas Square baring her bod painted with skin-tight latex for fashion shoots that are both beautiful and edgy. We caught up with the rising star who, upon meeting, told us that “While some people might steer away from muddy discussions about empowerment, sexuality, and feminism, my politics go with me to photoshoots and events…It hasn’t ever been a bad thing.”

Before beginning her Ph.D at OISE, Miinx was inspired to join the fetish modelling world after receiving some inspiration from friends who were already a part of the fetish and latex scene. For Miinx, the Fetish Scene elicits excitement, interest and freedom – though she concedes that the definition of freedom in sexuality and sexual expression can change from one person to the next. It was this type of freedom and flexibility that drew Miinx closer and closer to the scene that has since launched her into Alternative and Fetish fame while she pursues her Ph.D in feminist studies.

Squashing our mainstream ideas of feminism and fetish being mutually exclusive, Miinx has found the academic world to not only be supportive of her alternative escapades, but rather intrigued by the research benefits such a position in the underground culture of fetish could provide; “In one seminar I came ‘out’ as a fetish model when I had to pitch an idea for a paper,” she says. “There were a few wide eyes in the room but overall I think there was acknowledgement that fetish modelling is considered taboo so the ‘outing’ of myself was an act of resistance.  My professor was very happy with the finished paper. Apparently, Foucault and fetish create a fabulous dynamic.”

When it comes to the struggles of intertwining feminism and fetish, Miinx has met contention with the belief that modelling, even if it is alternative, remains to be an objectification of women. Miinx has tackled this issue head on, holding true to the belief that one cannot control the way their sexuality is interpreted by others, but can respect their own desires while being aware of their own sexual politics. It is here, Miinx believes, that people can make the choices that best reflect their beliefs. Simply put, Miinx says she is a woman-identified person who likes latex and likes to present as a hyper-feminine model. It is through her informed expression and performances of sexuality and gender that Miinx aims to enrich the diversity of what is deemed as acceptable.

It’s been a short but interesting year for the Toronto native, with exciting projects on the horizon. “I will be performing a live act for World Pride this year in Toronto, so who knows where the live performance aspect will lead?” she says. “I’m also filming a video soon that will be on the Funny or Die website so expect to see that in the next while… As per my Ph.D studies, I’ll continue to write and research, play and learn on the sets of photoshoots, and engage with the public about sexual politics”.