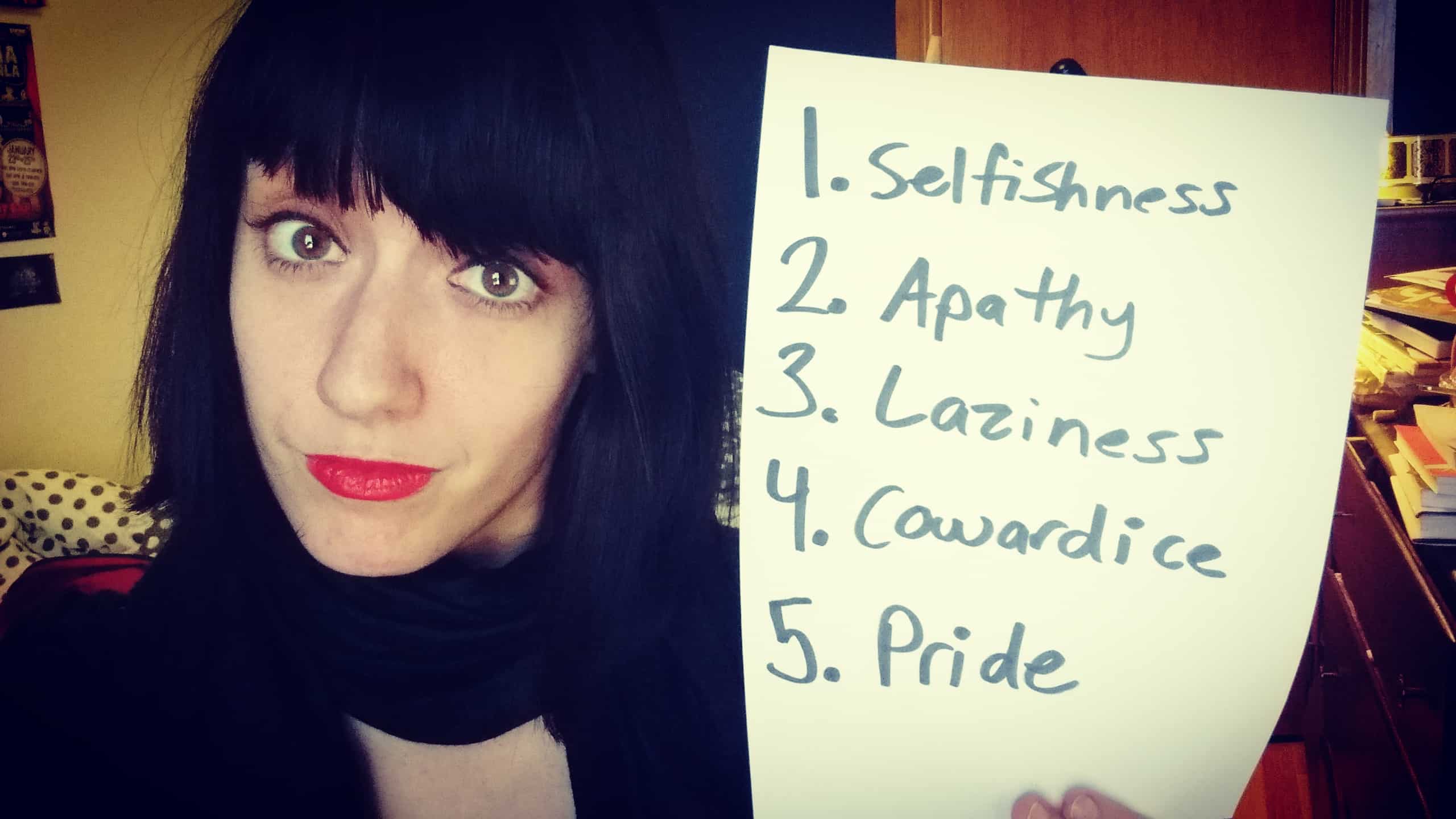 Five Things Stopping You From Not Being An Asshole

I was having a coffee with my friends Allie and Gwynne a couple of weeks back and we began discussing our lovers of the past. We shared tragic tales and angry rants and wistful regrets and we talked about how certain assholes that we’ve had sex with have remained assholes, despite our requests for them to not be assholes. Although they expressed an interest in improving their humanity, they never took the steps to actually do the improving. Their empty desires of character enhancement were fleeting and unproductive and superficial and boring as shit. We dug deeper into this topic of “asshole remains” and ruminated on why some individuals are incapable of changing for the better and altering bad behaviour and just being fucking nice.

I’m constantly hunting for ways in which I can blossom into a kinder, smarter, funnier Homo sapien. When I get feedback from someone in my life, I listen and try my best to apply their notes. Sometimes I can’t apply all of ‘em. I am a flawed sentient being and there are limitations to how much feedback you can absorb as to not go insane attempting to please everyone. I’ve taken lots of notes and disregarded others ‘cause I knew I would never be able to meet those specific needs. What I have always done is try to find a compromise so we are both happier. But not everyone has an interest in finding a compromise. They like being an asshole or they don’t care to improve or they genuinely feel like they’re stuck in this toxic cycle of jerkiness.

But being an asshole is learned behaviour. It’s not permanent. It’s how a person has been socialized or taught to operate by their parents/bosses/teachers/friends/media/patriarchy. It’s a result of circumstance, experience and complicated family history. Thus, it can be changed. You CAN improve for the better. If the same emotional injuries have been expressed in your direction from numerous persons, it’s time to push these bad babies aside, make changes and start looking inward. But there may be some things that keep you in a state of assholeness, five things in particular that stop you from advancing.

You want to continue in this manner because it benefits you and only you. I get it. I’ve been a self-involved piece of garbage. In my early twenties, I strung people along because it filled me with non-existent confidence. If an individual made me feel good, I would continue using them. I felt awful about it but my awful feelings were trumped by the positive effect they had on my self-esteem. That is until I started noticing the sadness in their faces. The awful feeling eventually surpassed the positives.

And that’s when I changed. I recognized that putting my needs above all else when it comes to relationships results in others being destroyed by my careless actions. You can’t completely remove the selfishness from within you, and of course there are benefits to being selfish (like taking care of your health instead of attending that holiday soiree) but there are also caps on that. Relationships involve two parties. Not one. They should fulfill the wants and desires of both of those parties. You gotta be able to look outside of yourself in order to begin your pilgrimage.

Looking outside of yourself requires having empathy. The ability to acknowledge, digest and understand the emotions of others. Sometimes when I explain to a man I’m sleeping with that what they did bruised my heart, he stares back at me in awe of the fact that forgetting we were hanging out and ignoring my phone calls would have upset me in any capacity. I know it’s difficult to slip into the shoes of another. You aren’t them and you will never fully be able to grasp the intricacies of their mind and how it functions.

But, you can TRY. You can TRY to see the world and your relationship from their perspective. How would you feel if someone you adore forgot you had plans and pretended that you didn’t exist for a day? I’m going to assume not great. You might feel less not great than myself (since my heart tends to land on the extreme end of the sensitivity spectrum), but it won’t be a celebration. You’ll – at the very least – frown. Remember that next time you are the perpetrator of the frowning. Close your eyes and recall that crappy sensation. You will organically not want others to experience it.

A gigantic part of being able to develop empathy is actually putting in the effort. Apathy stems from laziness. You don’t care because caring is exhausting. It’s easier to not give a shit. If you have to consider others in your human adventure, that’s going to require more thoughts/movements/strategies. Replying to messages takes time. Apologies are a nuisance. Serious “talks” are too much. Can’t you just…not do that? Right this minute? You don’t like looking into the future and doing what’s best in the NOW to assist your friends and colleagues in the future. You live in the present and your present wants to take a long-ass nap.

Hey, I get it again. Napping is the best. But if taking a three-hour nap means I’m going to cause extreme stress in someone I like? Well, maybe I can opt out of napping. Or decrease those naps to one hour. Or two. Or two and a half. You need to build up those anti-lazy muscles. Just like exercising or brushing your teeth or charging your phone more than once a week, you gotta cultivate a routine and stick to it. When you see an email, reply to that motherfucker ASAP. Even if ASAP in your world is within 48 hours. That’s progress, buddy. Especially if you previously weren’t replying at all.

Not being lazy also involves not being a coward. Serious “talks” ARE a lot to handle. I do not deny that. Even when I request to chat with a colleague about something they’ve been doing that’s gnawing at me, I go into an instant panic. I exaggerate their reactions in my mind. “They’ll never want to work with me again,” I convince myself. “This is going to end in a legit fist fight and I am going to die in an ambulance,” I imagine. “They’re going to despise me forever and turn the entire Internet against me and write a ‘Burn on Jess’ book and then publish the book,” I full on yell-scream.

All of this panic is based in fear. Fear is quite powerful and debilitating and fearful. (Yes, fear is fearful.) I avoid tough conversations because I fear fearing their arrival. I don’t want to be labelled the “bad guy” and I don’t want to label someone else the “bad guy,” ‘cause they may not like me afterwards. AKA I am being a coward. Instead of sucking back that gross cough syrup, I have 100% chosen to stay quiet and bypass confrontation before. But without confrontation a person may not know they are hurting you or being hurt by you. Progress is impossible without good communication.

Of course, like selfishness, there is a cap on confrontation. If you’re arguing with someone most times you speak with them, that’s likely because you two aren’t compatible, and that’s okay. But if you still see potential and if this human is incredibly important to you and if you desperately want this relationship to continue on, you need to prepare yourself for some serious sit-downs. If you can’t deal with seriousness, then maybe you should move into the woods and never speak to anyone ever again? Although, I can also see beavers not tolerating your bullshit.

You can’t face the music if you aren’t willing to admit that you have done wrong, that you HAVE been an asshole, that you have forgotten plans and ignored the existence of a friend and slept through birthday parties (guilty). What often prevents people from owning up to their personal misconduct is that they think doing wrong means they’re a truly awful person who is going to be an awful person until they expire. So you deny, deny, deny. How could you have been shitty to someone? You’re perfect. They’re totally overreacting. They’re being delusional and crazy emotional and are clearly obsessed with you. Which translates to “pride, pride, pride, pride and pride.”

Doing wrong does not make you a forever-awful person. It means you’ve made mistakes. You’ve been rude or selfish or apathetic or cowardly. You CAN recover from these errors, but you can’t do it until you accept your current piece of garbage-ness. That is what makes putting your pride aside the most important step in changing for the better. If you hold tightly onto that pride, then your inner asshole is going to remain intact and soon enough three cool girls will be ranting about you in a coffee shop.