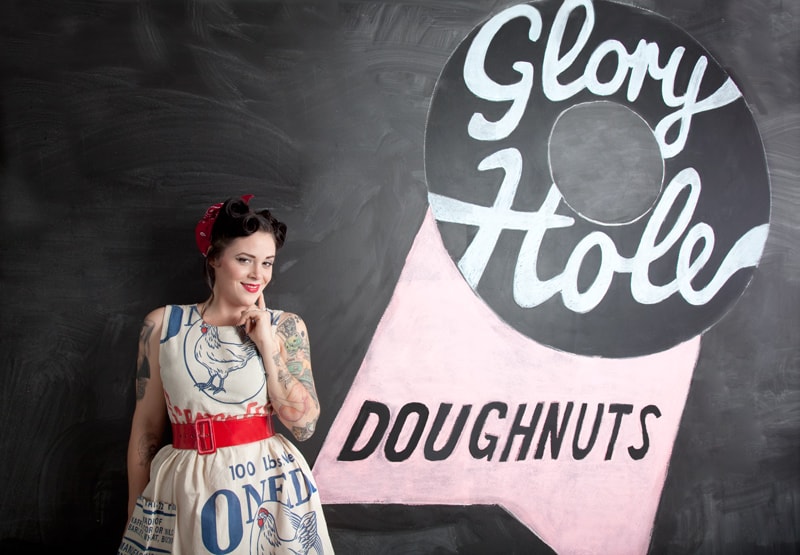 If you look closely in the window of Glory Hole Doughnuts, there’s a sparkle of something magical. It’s a shiny glimmer of inspiration where fresh doughnuts are handmade with love, precision and detail. It’s not just a doughnut shop at 1596 Queen Street West – it’s the heartbeat of Parkdale, where sprinkle lovers, cream aficionado and icing addicts come together for the love of fried dough. Intrigued about the woman behind the doughnut dynasty, I contacted Ashley Jacot De Boinod, the owner of Glory Hole Doughnuts, to find out the mouthwatering details behind her beloved three-year-old doughnut shop. Ladies, grab a napkin. You’re going to drool in doughnut awe.

SB: I think more Toronto shops should be named after sexual slang. Glory Hole’s got a great ring to it. I take it you’ve had some interesting conversations with folks inquiring about the name. What do you tell people? Does it get annoying answering the same question after a while?

AJ: Generally, answering the same questions over and over can be a bit of a nuisance for anyone in retail or the FOH of a restaurant, BUT I don’t mind answering that particular question. It never gets old. You see, there is a long history of penis and vagina jokes in the food industry. Chefs all throughout time have had their produce come in and at one time or another, a carrot, a zucchini, or a piece of celery is going to be phallus shaped. We are all children at heart, and things get pretty hilarious after and during a 16-hour shift. Glory Hole is an ode to kitchen life and your kitchen family. Alternatively, I tell wee old ladies that it’s a mining or glass bowing term and to get their minds outta the gutter. GAWD!

When you say that Glory Hole is a specialty doughnut shop, you’re not kidding. You’ve got everything from Rose Water Pistachio, Lemon Ricotta and Cherry Pie flavours. Tell us about your flavour creation process, how do you come up with these TO DIE FOR flavours?

I like to take inspiration from classic desserts. Coconut cream pie, lemon meringue, cookies and cream etc. Some of the more outgoing flavours I’ve done in the past, like the stuffing doughnut (sage, rosemary, and cranberries topped with vanilla glaze and bacon), stem from my years on the line. I like to take classic meals and try to incorporate them into doughnuts. If you treat doughnut dough like bread, the possibilities are endless. You can add spices to it, herbs, cheese. It’s incredibly versatile.

It takes guts to leave the security of a job to start something new. What was the final straw that motivated you to leave BUCA and start Glory Hole? Did you ever feel like, “Wow. This is INSANE. What am I doing!? I’M TERRIFIED!”

Doing something on my own was always the dream. I think it’s the inevitable step for many cooks and chefs out there. I’ve always liked taking risks. I hadn’t been at BUCA for a crazy amount of time. I sort of wished I had stayed there for a bit longer, to be honest with you. It taught me a bunch and Rob and Ryan worked their asses off so, that definitely was motivation for me. We all already work long hours as it is whatever position we take on in the food industry, so it wasn’t such a scary thought.

It was one of the most difficult/satisfying tasks I’ve ever taken on. It’s a complete rollercoaster ride. You’re tired and dealing with unreliable contractors and the city. In the end when it’s all over, you stand around and take a look at what you’ve accomplished with all of the hurdles and heartache associated with opening a business and say, “Holy crap! I made this!” It’s an incredible feeling.

If you could pick any doughnut flavour (combo encouraged) to describe your personality, which ingredients would you choose and why?

Hmm, that’s a tough one! I’d say maybe coffee cake. For one, it’s one of my favourite treats, second, who doesn’t like coffee cake cause I don’t want to know you! I LOVE coffee. It has the perfect textural components. Like me, coffee cake has a tough exterior with all of its sharp crumble, and a soft pillowy interior. Hahahahaha, I feel so vulnerable talking about my true doughnut self!

One of my biggest passions in life are dogs and all animals really. I am a BSL advocate for obvious reasons. I’ve raised several pit bulls and currently have one in my family. Her name is Pig and she’s my best bud. I take her everywhere and have her tattooed twice. I guess that and my extreme love for GOT. So much so that I have a Winterfell tattoo.

Tell us about your relationship to Parkdale. Out of all the neighbourhoods in Toronto, why did you set up shop here?

Well, number one, I have a house in Parkdale. I wanted to be able to set up somewhere close to where I was living just in case there was a massive explosion that needed to be dealt with. Parkdale is such an interesting neighbourhood. I rarely leave the area because everything I need is right here. Great coffee (Capitol), great shops (Crown Flora, The Future of Frances Watson, Coriander Girl), AMAZING restaurants/ bakeries (Chantecler, Porzia, Electric Mud, Grand Electric, Geraldine, The Tempered Room…the list goes on). The changes have been great for everyone here. We have all been grateful, but there is a certain part of Parkdale that I hope never leaves. It is its true authentic self and I never want that to change.

Who is your most trusted taste tester for new doughnut flavours?

MY HUSBAND! He has been there through all the late nights and weird flavour combinations I’ve tried. When I was developing recipes, I did that at home because I wasn’t serving to the public yet. I would wake him up sometimes at 2am to make him try something. He was such a sport!

Glory Hole is so popular that it’s been known to sell out (whoa!). Let’s talk new customer buying strategy: What’s the best day and time to visit the shop to guarantee the best doughnut pickings without a lineup?

Monday-Wednesday seem to be our slower days, but not always…hehe. I’m always surprised at how much my staff increases my numbers and yet we still sell out a large portion of the time. Customers are more than welcome to pre order with us or, alternatively, go through our partner at FOODEE. They can deliver product right to your door!

Your husband, the talented handyman and branding expert behind Glory Hole, is obviously an all-star. How did you guys meet? Doughnuts? Was it a doughnut love story? (Feel free to share a beautiful doughnut love story if you have one)

We met in high school actually, but the circumstances were a bit different. He was my brother’s friend and well, we didn’t really know each other. It wasn’t until I hit my twenties that I saw him again and had a funny feeling I never experienced before. We started dating and I knew instantly that I would marry him…in fact I insisted….Lol. He proposed on Halloween (our favourite time of year) while I was wearing an American Gladiator outfit (I was dressed as Zap…duh). He has been right by me for everything. His talents at his current agency are really incredible! I’m so proud of him and am so grateful to have him in my life.

How have doughnut trends changed since you first opened shop? What’s the most annoying food trend you’ve seen since opening?

I really got a bit tired of the whole bacon trend. Look, sweet things and bacon are delicious, I’ll be the first to admit it. It doesn’t need to go on EVERYTHING though. I stopped doing it a while ago. I may do it as a special here and there but, it won’t go back on the menu. The cronut thing as well was a bit much. I refused to make it! Knowing how it was made, I just wasn’t that interested I guess. I’m sure it was all kinds of delicious though.

How early do you wake up in the morning? What type of alarm sound do you use? Prison alarm? Motorcycle grumbles? A lightning bolt?

We are here sometimes as early as 12am if there is a super large order to accommodate. In general, my first baker is in for 3am. We bake all throughout the shift and make literally everything you see on the doughnuts in-house. As for alarms, when I have to go in for the overnight shift, I use a series of bells, whistles, and dog barks to get me up. Only thing that works.

My life is falling apart and I’m PMSing like a motherfucker. I want a doughnut that will satisfy my craving for something sweet, gooey and comforting. What doughnut will save my life right now?

Ok, just CALM down here. I’d give anyone who’s bleeding from their vagina the comforting Toast and Butter doughnut! It has a brown butter frosting, sweet bread crumbs and cinnamon! It screams, “Stop thinking about murdering everyone in sight!”

I give you a doughnut filled with magic mushrooms, then offer you a wild opportunity to fly back in time to sit down with Ashley Jacot De Boinod (age 21) over doughnuts. What advice to you give her, and what doughnut do you give her to blow her mind?

Oh WOAH! “Hey, 21-year-old Ashley Jacot De Boinod! I can see you REALLY like wearing gothic style makeup and clothes. That’s cool and all, but come on. Yup, you’ve chosen a difficult industry for women to be in. Yes, there will be sexual harassment, and yes, there will be some unfair situations to have to deal with but, ultimately, you chose this path because you are passionate about food and have desire to change how people treat their food. You will work long hours and see your friends less and less, but you know what your ultimate goal is. Keep pushing. Also, you’ll fall in love with a really rad dude in like T-Minus 1 hour. Buy him a shot and bring him home!” 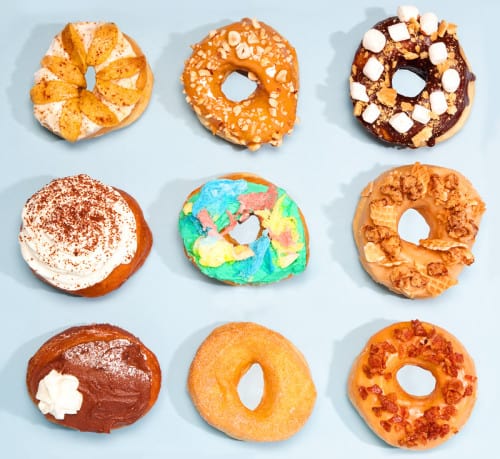