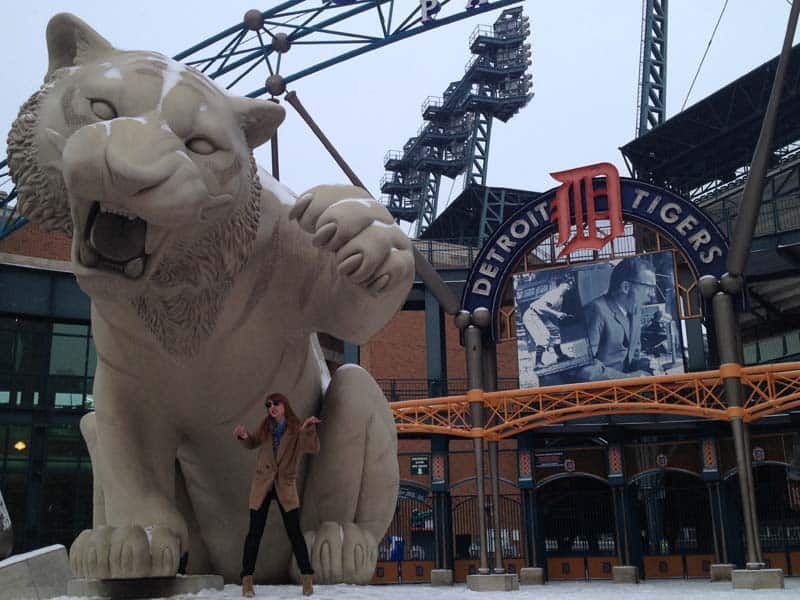 "This City that Henry Ford built, the city that Ford abandoned – this city is not given nearly enough of its due."
Travel

Alice is currently travelling around America in a sketch comedy show. This week, she’s in Detroit.

“I can’t believe how much I love Detroit!” quickly became the mantra of the trip, repeated nearly hourly by every member of cast and crew. Detroit in my mind had seemed scary, even dystopian. I visualized it as something in between 8 Mile and Robocop. I imagined it as the sort of place where if I were to walk at night, I’d duck into an alley only to find myself cornered, leaving me with no alternative to muttering a prayer to God or a sassy catch phrase before Batman would swoop down to save me. I was imagining Gotham City, making me some kind of Vicki Vale analogy.

Detroit in reality is beautiful, picturesque even. Even though January has now turned to Ferbuary, Detroit’s downtown is still lined with Christmas lights. In Square, Amanda, Pat and I watched a man perform a flawless pirouette on the outdoor skating rink. Everywhere we travelled, the people were kind and friendly. This City that Henry Ford built, the city that Ford abandoned – this city is not given nearly enough of its due.

“Wait, he is still really cute,” I protested. Amanda laughed and shook her head, “No. Not at all.” Jenna chimed in, “All right. Now I need to see a picture.” How it became 4 am, the three of us weren’t sure. The time had flown by, with Amanda and I pulling up an ex’s profile pictures to prove whether he was hot or not. I’d find one of him in a blazer – point Moran. Amanda would find one of him with a puke stained shirt – point Barker. We laughed and gossiped and drank until we noticed the time and parted ways after making a false promise to get up for 11 to go to yoga.

Amanda and I decided to head to the Detroit Institute of Arts the next day. The DIA is incredible – I cannot stress this enough. It’s an art deco building with vaulted high ceilings housing art works that line the pages of many an art-history text book. We strolled the nearly empty halls flipping back and forth between marvelling at its splendor and debating which works of art looked like which person. We strolled pass Anne Hathaway, the Dos Equis man, and weird cherub Chris Kattan when—speak of the devil— there he was, my ex-boyfriend. Amanda was actually the one to see it. She pointed the impressionist rendering of my greatest mistake out to me. Cher from Clueless once quipped that some was like a Monet painting, “She’s okay from a distance but up close she’s a big old mess.” As Amanda and I deconstructed two years of on-again-off-again-what-is-even-happening, that Cher-ism seemed increasingly apt.

Finally Amanda entered a room that housed only a small couch and a projector screening an 80s Swedish art film onto the wall. We became mesmerized: the video showed a massive chain reaction – a ball rolling down a ramp, knocking a candle over, starting a fire, filling a balloon and on and on. Before we knew it, 20 minutes has passed and our feelings changed from captivated to irritated. We needed to know how it would all end. Would we see the artist at the end? Would these reactions create something or destroy something in the end? Would that barrel roll into an axe, spilling out gasoline that would catch fire and destroy Harvey Dent’s face?

And just everything with the ex, it just ended; no explosion, no tears, no closure. We blinked at the blank screen for a moment, before bursting into a fit of laughter. “A lot of build-up and no pay off”, I giggled, “Story of my life.”

"This City that Henry Ford built, the city that Ford abandoned – this city is not given nearly enough of its due."