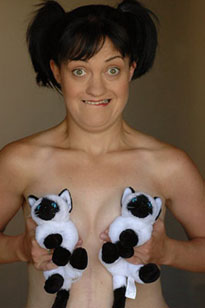 The first time I saw comedian Nikki Payne perform, she stood on a shoddy Toronto stage, with her bare mammaries painted to look like cats. That was a long time ago, and she’s grown up a lot since then.

Giving your dad one of your kidneys will do that to you.

Her one-woman show My Big Fat Donated Kidney debuts at this year’s Just For Laughs Festival, and is a comedic chronicle of that very personal and frightening experience of saving her father’s life in November 2007.

“It’s a scary process, writing something that’s so true, and so close to the bone,” Payne confessed to me one Friday morning. “It’s daunting to write something that is heartwarming and is personal, but still funny.”

Heartwarming and personal are relatively untrodden territories for Nikki’s comedy. She is known mostly for an in-your-face, unpredictable approach to standup that has garnered her quite a bit of attention both at home and south of the border, where she appeared on NBC’s Last Comic Standing.

“I’ve never been this vulnerable on stage before,” she admits. “I find that I’m nervous and scared and petrified, and that’s really cool.”

Audiences think it’s cool too. Payne said, “I was really worried that people wouldn’t connect with it, because not everybody’s donated a kidney, but what happened slowly over time with writing this, is that you don’t need to, everybody has a family that makes them crazy. I was finding that people were laughing harder at the stuff I was talking about with the kidney, then the regular standup.” She went on to add that, in her eyes, the soul of the show is that, “you can love people that make you insane.”

If her lisp, her brief bout of Bell’s Palsy (an affliction that paralyses one side of the face), and her losing an internal organ haven’t stopped her from continuing her comedic quest, nothing will. Anthony Clark, the host of Last Comic Standing, proclaimed once as Nikki left the stage, “I don’t know if it’s really fair to laugh at people with issues like that.”

In Nikki’s case, it’s not only fair, it’s expected.

My Big Fat Donated Kidney will be showcased at Comedy Bar (945 Bloor Street West) on Friday, July 17 and Saturday, July 18.

Tickets are $20 and can be purchased online at boxoffice.hahaha.com or www.comedybar.ca