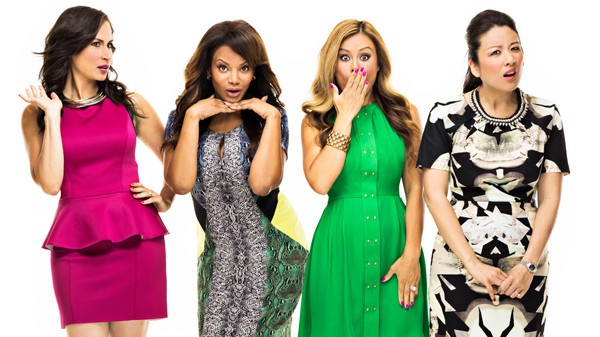 How do you make it to the top? Meet the co-hosts of CTV’s new live talk show THE SOCIAL

“The four of us are hustlers. That’s what it is: you have to hustle.”

When I ask the co-hosts of CTV’s new talk show The Social how they’ve built such impressive careers, that’s how Lainey Liu, one quarter of the team, answers.

As I wandered into a green room at CTV headquarters, Melissa Grelo, Traci Melchor, Cynthia Loyst, and Lainey Liu were Instagramming photos of their shoes. They had been up since 4:30am, and I’m not sure whether they were on their fourth coffee or were simply excited about the launch of their new show. Either way, sparks were ricocheting off the ceiling, voices boomed over one another, and they were howling in laughter. Their personalities are big, and for a live audience talk show, that’s gold.

Before Melissa Grelo was a news anchor and host of CP24 Breakfast, she was a teacher in Nobleton, ON; she made the tough decision to abandon one profession and pursue another. And like any career, you start at the bottom before you get noticed. She made her way from the news desk in Barrie to being the CTV co-host of the 2010 Vancouver Winter Olympics.

Lainey Liu has been waking up at 5am every day for nine years to break entertainment headlines before the rest of the world. She sleeps less to ensure that her readers on the east coast get the goods as soon as they arrive at their desk. She updates Lainey Gossip, on average, over 10 times a day; but before her site took off, and before she became a host on etalk, she worked at Covenant House in Vancouver. Her success has been a daily grind for over a decade.

Traci Melchor is a single momer of twins who rises at 5am to make the commute from Pickering to downtown Toronto for her live hits on CP24 morning news. A Seneca graduate, she began her career guest starring on TV shows like Lizzie McGuire and CSI. She’s now been at CTV for over a decade, and has become a much-loved personality. She has also interviewed everyone from Dolly Parton to Oprah Winfrey.

Cynthia Loyst made her name as the host/writer/producer of CityTV’s Sex Matters. She never shied from tackling taboo subjects, and she was able talk about sex on air with sophistication, grace, and sincerity—while also keeping things really fun. And that’s not easy! The Gemini Award winner is balancing The Social with a three-month-old baby, and admits that breastfeeding helps her combat stress.

Since the show launched on Labour Day, the four co-hosts have chatted about everything from the Hells Angels, to Jennifer Aniston’s bump-to-be, to the need-to-know info when one is considering pet adoption.The Social is light, fun, and entertaining. It’s not the subject matter, or even the online interaction, that holds the audience—it’s the energy that these women bring to the stage.

Sitting across from them, I ask what keeps them motivated. “We step away for five minutes and we want to jump right back in,” says Grelo. Adding to that, Loyst remarks, “Our personalities are always looking for the next thing.” Melchor chimes in with: “You’re only as good as your last show!” But it’s Liu who really dishes the tough love. “People don’t push themselves hard enough,” she says. “You can do two jobs, wake up at 4am, look like this [points at the bronzed and toned Grelo], read the news, make The Social, breastfeed your baby [pointing out Loyst], and come back to work after three months and do a media tour with no complaints!” Her voice raises as she continues, “If you think you’ve hustled hard enough, NO! Sleep one hour less and see what happens.”

Yep, these women are highly ambitious. All four are grateful for this new opportunity, but they also know they’ve worked their asses off to get to where they are.

Talent will take you far, but it’s drive, hustle, and an almost insatiable appetite for higher achievement that will take you to the top. If that’s where you want to go.

The Social airs Monday to Saturday at 1pm EST on CTV. Interact with the hosts on Twitter with @TheSocialCTV and sign up to be a guest in the live audience here.