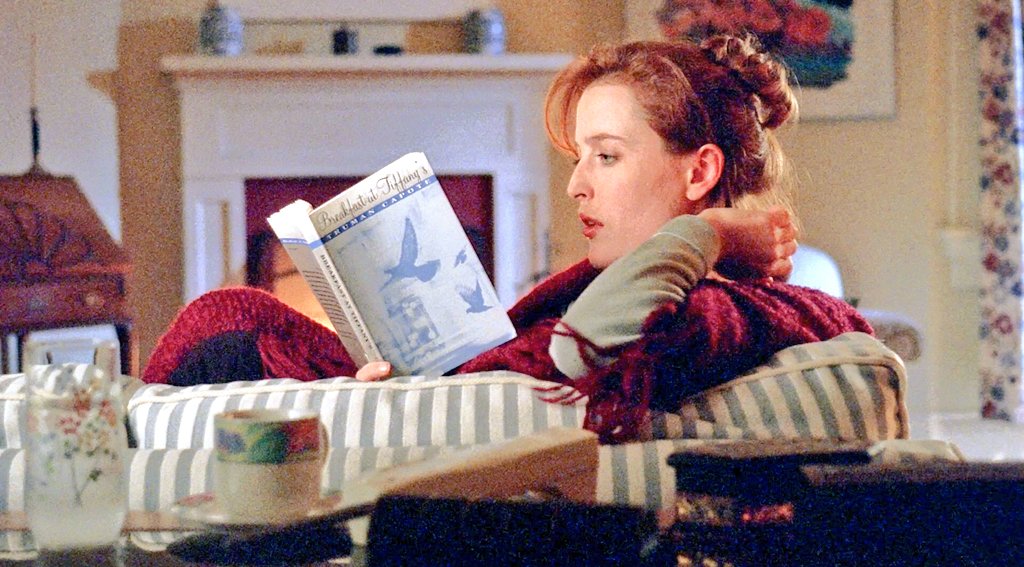 "I am trying to become more comfortable with the idea that you can love living alone while still experiencing loneliness."
Life Stories

A year into living alone through the pandemic, inspired by a Rhoda marathon and my own loneliness, I created a new Instagram account dedicated to other women living alone, straightforwardly called @womenlivingalone. I feature mostly fictional characters, but also the occasional real woman, like when queen Whoopi Goldberg famously declared, “I don’t want anyone living in my house.”

The inaugural post was, of course, my beloved Rhoda Morgenstern. She’s sitting in her absolutely perfect apartment, which I’ve lusted over ever since I discovered the underrated spin-off of The Mary Tyler Moore Show. I started with Rhoda because she was my inspiration, but also because her home is a complete extension of her. It’s bright and vibrant and quirky with style to spare, much like her. It felt important to not only showcase solo women, but their sacred spaces, too. With each post and new follower, I felt a growing sense of catharsis and community, both of which I desperately needed.

Given that I mainly consume media featuring women, it wasn’t hard to get the ball rolling. From TV icons like Dana Scully in The X-Files and Elaine Benes in Seinfeld to film favourites like Sally Albright in When Harry Met Sally and Terry Doolittle in Jumpin’ Jack Flash, there were plenty to choose from. And much like real life, they all have their own reason for living alone ⸺ some by choice, some by circumstance; some thrive, some struggle.

In a heteronormative society, romantic relationships and insular, nuclear families are valued above all else. Now in my 30s with no plans on partnering up or having children, I often wonder where that leaves me. I entered the pandemic with a big, supportive circle of close friends, and now that circle has shrunk sizeably. No one is out of my life completely, but it’s just different now. Many of them have settled down with a long-term partner, some also have kids.

Weekly coffee dates, frequent movie nights and dinners, spontaneous trips for ice cream in the summer, meandering Saturdays wandering from bar to bar in search of the city’s best sangria or margarita, doing nothing together. A lot of that has been lost. I understand the why of it all — the pandemic, and living in a heteronormative and capitalist hellscape that leaves little room for friendship — but I still feel immense grief. We don’t often talk about grief in terms of a friendship ending or changing, but we should start. It’s painful, especially when you’re on your own without a built-in person to hang out with on the couch.

There’s also this expectation that because I’m single and childless, I should always bend myself to accommodate those who aren’t. For a long time I thought, “Okay, I can do this. If I just make myself as available and flexible as possible, I can maintain my friendships. If I continue to reach out, my friends won’t forget about me.” But that isn’t sustainable for me, or fair. It’s a recipe for resentment and hurt feelings. When you’re isolated, it is easy to accept crumbs and when you only accept crumbs, you remain hungry. As someone who doesn’t like to ask for anything, I am trying to be more comfortable with the idea that wanting your friends to show up for you isn’t selfish. It’s completely within reason.

I go through waves of feeling my heart open to the potential of making new friends. I’ve successfully made a few, thanks to Twitter and Bumble BFF, but as a shy introvert, it’s a lot of work. I often end up in a state of mental exhaustion and hopelessness, longing to go back to the way things used to be, while working hard to accept that they won’t, at least not any time soon.

At first, my captions on @womenlivingalone celebrated the best things about living alone, most of which fall under the “do whatever you want, whenever you want” umbrella. And while that is my favourite umbrella, I realized I wanted to share more nuance and vulnerability, especially as the raging pandemic exacerbated all that’s hard about being on your own. I am trying to become more comfortable with the idea that you can love living alone while still experiencing loneliness. Two (or more!) things can be true at the same time. I wouldn’t change living alone for the world, I love the freedom, peace, and agency it allows me. I love not being perceived at home, I love controlling every form of stimuli from lights to volume to temperature. I can decide to dedicate a week experimenting with different egg preparations in an effort to reverse my lifelong aversion to them.

At the same time, it’s hard as hell and that’s okay to admit. A recent post I made on @womenlivingalone features a line from Virginia Woolf’s classic novel Mrs. Dalloway, one that often echoes in my mind as I go about my day. “Mrs. Dalloway said she would buy the flowers herself.” In the titular character’s case, it was literally flowers. But I’ve begun to think of it more metaphorically, a phrase that encapsulates what it means to live alone. You are responsible for every aspect of your existence — cooking, cleaning, laundry, errands, making coffee, groceries, paying the bills. There is no one to pick up the slack.

Sometimes I take comfort in that quote, as I often do in Virginia Woolf’s words. Like, yes, I AM capable of buying the “flowers” myself. Other times it feels devastating and overwhelming because we all need and deserve help shouldering the burdens of everyday life. So, what do you do if you don’t have it? Given the heartfelt (and much appreciated) responses to my post, other women living alone seem to be wrestling with the same question. I wish I had an answer for all of us.

This is all why I am so thankful for my little corner of the internet. I have received messages from women who return to my Instagram for validation and comfort. As much as they take solace in my project, I take even more solace in them being there with me. When you exist outside of the norms of societal expectations and systems, representation is important.

Excitingly, I am not the only one doing this work. I am consistently inspired by other women in this space: Shani Silver, podcaster (A Single Serving) and author (A Single Revolution), Amie Kelbing, host of The Spinster Life Podcast, Emma Duvall, historian of childfree women throughout history, Jackie Dives, a photographer who riled up the internet by creating a gift registry to celebrate her single and childless life, and Lucy Meggeson, host of the Spinsterhood Reimagined podcast. Nonfiction books like The Lonely Hunter by Aimée Lutkin and Spinster by Kate Bolick have been invaluable to me. Additionally, books that examine and celebrate friendship like Text Me When You Get Home by Kayleen Schaefer and Big Friendship by Ann Friedman and Aminatou Sow are always a comfort. I am so honoured to be a part of this super cool, special community of women doing their own thing, paving new paths, and normalizing it for all of us in the process.

Dear reader, if you’re in a similar boat to me, I want you to know how strong you are. I’m with you, wholeheartedly. A reminder to you, as much as it is to myself, your loneliness is not a personal failing. And if you aren’t in a similar boat to me? I encourage you to reach out to a friend who is. Listen to them, make a date to spend time together, offer to come over and do their dishes, put in consistent effort. I promise you, it will mean a lot.

Danita Steinberg is a Toronto-based copywriter and freelance culture writer. She also co-hosts We Really Like Her!, a podcast and monthly screening series that celebrates women in film. You can usually find her at home arguing with her cat, watching paranormal investigation shows, or on Twitter and Instagram at @danitasteinberg.

"I am trying to become more comfortable with the idea that you can love living alone while still experiencing loneliness."