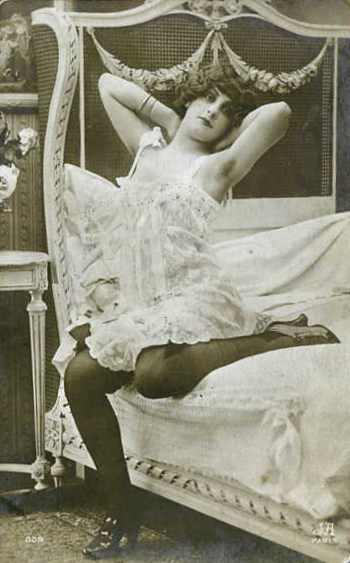 "Say what you will about #normcore, but it doesn’t belong in sex."
Sex & Relationships

During my teens I thought I was having good sex. No, great sex. I was convinced that this was what the Olympics of sex and I was getting a silver or gold e’ry night. My twisted upbringing of binging on The O.C. and other early 2000s pop culture led me to believe that sex, despite potentially leading to pregnancy and other post-coital land-mines, was a fairly basic affair that just felt good.

It became formulaic for me—make-out for five minutes, stroke his cock through his pants, take your top off, put your hair back, give him a little oral satisfaction, get on top for a bit, then let him finish in missionary. I mean, I was acutely aware of the fact that I wasn’t orgasming all the time during sex, or even the majority of the time, but I figured if the guy came then my pleasure could mostly be derived from that, and anything else was a bonus (THIS IS A GARBAGE THOUGHT, WOMEN, DON’T BE LIKE THAT).

This came to a head (wink) one day when I was drinking with two friends in their early 30s. One mentioned attending to her boyfriend’s behind, digitally. I recoiled. Until that point I had only let one person near my back-door and even then it was because I found myself drunk, pressured, and on my period. I avoided farting for a full week after that, scared I’d somehow broken it permanently. Since I was so clearly afraid of my OWN behind, I could not imagine going near someone else’s. My one friend chided me for my reaction and said, “It’s different when you get older.” I shook my twenty-one year-old head and thought, “No way.”

Now, at 26, I’ve had my freakiest, weirdest, and best sex in the past two years. Granted, this is hard for a lot of people to achieve when not in a serious relationship. I’ve somehow eluded that, but managed to find some open-minded people who are comfortable with being assertive in bed. Guys have asked me to do some things that, initially, weirded me out. Then I thought, Am I really uncomfortable with this, or am I projecting because this isn’t the sex that pop culture taught me was “normal?” Say what you will about #normcore, but it doesn’t belong in sex.

Everyone has and should know their line (mine’s feet, sorry gentlemen), but everything else should be up for grabs, at least until you know you don’t like it. I take the Dan Savage approach known as “GGG”: i) be good in bed, ii) be giving (equal time and pleasure to both partners) and most importantly, iii) be game for anything (within reason).

I’m not saying you need to start giving/receiving golden showers (though, hey, maybe they’re nice?), but I think it’s worth checking your judgements at the door when you hop in bed. You don’t want to look back on your 20s and 30s and realize you were having the sex you thought you should be having instead of the sex you wanted.

"Say what you will about #normcore, but it doesn’t belong in sex."