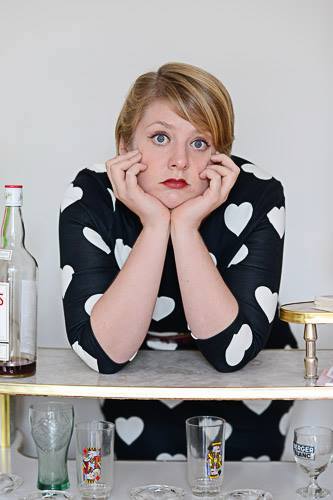 "I wish the disappointment came in a big, catastrophic way. If the person you went on a date with was truly awful, or verging on the psychopathic it makes a great story. But usually, they disappoint you because they’re just dull, they’ve never even heard of Twin Peaks (?!), and at some point during the date you realise that they are the kind of person that kisses their dog on the mouth."

How to Meet People in Your Thirties

I went speed-dating again. If you know me or you’ve read my blog before, you’ll know that I’m very bad at it and that last time I did it was a disaster. I must confess that part of the reason I did it this time is because I thought it would make a funny blog. On the day of the event I realised that I’d actually have to go through it again, because I’m not detached from myself, just watching my own life like a movie.

On that day, I hated myself. Oh, how I deeply despised myself. However, as I’ve also previously mentioned, I’ve been doing lots of things that scare me in recent times in an “effort” to”‘grow” and “become a better person.” I am a woman of constant terror–stick that in your harmonica, Bobby D. Pushing ourselves out of our comfort zone is truly when we learn the most about ourselves, and I’d signed up to another bout of self-knowledge.

The event I tried this time was called Compatibility Cabaret, and it was much more fun than the speed-dating event I tried before. A group of musical comedians were hosting it. They performed songs in between the more date-y bits, and it took the focus off the MEET SOMEONE, NOW, WHILE YOU CAN pressure. On top of this, it was done as a series of games and questions; there were no one-to-one dates. I was surprised to find out how few people had kissed somebody at a work party during a game of Never Have I Ever, but they were a fun bunch in general.

I don’t feel like I was amazing at it this time, nor I think, will I ever be. But, I left a note for a person who left a note for me. We swapped Twitter handles. I know! How modern! I am a very modern woman. In the end, it didn’t come to much, but it was nice to make a friend. How then, does a woman of a certain age (thirty-one) meet a lover in London? It’s something that crosses my mind between one and twenty-seven times a day. Here are the five best ways to meet someone in London if you’re over thirty.

1) Regular Internet Dating.
These days, whenever I get a message from someone on a dating site, I just feel irritated. Yes, I am an irritable person in general, but I just can’t be bothered with this anymore. You have to go out into the cold to meet a stranger who will almost certainly disappoint you. I wish the disappointment came in a big, catastrophic way. If the person you went on a date with was truly awful, or verging on the psychopathic it makes a great story. But usually, they disappoint you because they’re just dull, they’ve never even heard of Twin Peaks (?!), and at some point during the date you realise that they are the kind of person that kisses their dog on the mouth. Next.

2) Irregular Internet Dating, or those apps like Tinder, Grindr, and Brenda. Yes, the lesbian one is called Brenda. I know.
Oh, I’ve been on them. I’ve been on them alright, and they are fun. On Tinder you get to throw people away and they get a big ‘nope’ stamped across them! It is like the best misanthropist card game in existence! I could nope, nope, NOPE for hours. These apps were designed more for hook-ups than dating, although people use them for both. Personally, I’d be too frightened to invite a stranger over to my house based merely on two exceedingly flattering photos of them. They could turn out to be a psychopath! Or smell really bad! They could steal your crockery! Of course, as we all know, they can just as easily turn out to be a psychopath if you know them in real life first, and more often than not you only realise several years into the relationship. But I feel like you’re really decreasing your odds of getting a heads-up on the axe murderer front by inviting someone over straight off The Tinder. Plus, as with the other kind of internet dating, there is no predicting chemistry. And British people are so polite/repressed I think that if I invited someone over for a dirty bang and we didn’t fancy each other, we’d probably end up having a stilted, uncomfortable courtesy fuck anyway, because MANNERS, and I’m not that desperate. Yet.

3) IRL, at a club, bar or pub.
Haha, I said club. I’m over thirty! I don’t go to clubs! I’m old, my joints hurt, and I have an electric blanket, why would I go to a club?! People my age have dinner at each other’s houses because they’ve got huge mortgages or barbeques with the same old couples you yourself set up years ago. Side note–I work extremely effectively as an aphrodisiac for others, but it doesn’t work for me. It’s like an Ancient Greek punishment–Sisyphus got nothin’ on me. My punishment that continues forever in Tartarus is that I cause other people to get together, destined to be eternally alone. I’m thinking of hiring out my services for $$$. Anyway, the dinner party failure leaves us with bars and pubs. It’s hard to approach strangers in a bar. The idea of chat up lines makes me want to die. And my friends are probably better company than that lonely person over there, sobbing into their pint. This is not great for me either.

4) At a house party.
This is really the only feasible way to hook up with someone I fancy because a) I invited them to the party, b) they have been invited by one of my friends, or c) I might actually fancy a stranger because it’ll be a friend of a friend and we’re more likely to actually have something in common. Sure, obvs most people will be in a couple. But there will be some singles, there will be a tiny mouse-hole of hope. The problem for me here is that after the initial jokez and piss-taking bit of flirting, I can’t take it to the next level. I become so self-conscious I’m rendered almost entirely immobile. And I probably have a lot of guacamole on my face. The house party has a 50-60% pick up rate, I would say.

5) At a class or place of mutual interest.
This is the perfect way to meet someone! I’ve seen the rom coms, we meet in writing class. We disagree about everything. Then we meet in a social situation and get on like a house on fire. We go back to mine for soup. Does it really work like that? Well, I took a fuck-tonne of classes last year. I met lots of wonderful, funny, interesting, talented people, people that I genuinely cherish. But did I meet anybody with whom I could make a mutual agreement involving the tessellation of body parts? Hells no. Not a single one (geddit). Maybe I’m going to the wrong classes. Life drawing, anyone? Embroidery?

The truth is I don’t want to actively look for love or sex or whatever. I want to find it organically. I do loads of stuff, and I have a lot of friends, surely it is statistically likely that I’ll meet someone I like? That’s taking the Ancient Greek curse out of the equation. However grumpy or stand-offish I seem at first I actually love people. Not just in an “I find them fascinating” way, but in a “connecting with someone, really connecting is the whole sodding reason for existence, really” way. Whether it’s just in one specific instance, a transient moment, or whether it’s someone you feel like you really get and get along with. Twentysomethings can have the club. I’m just biding my time.