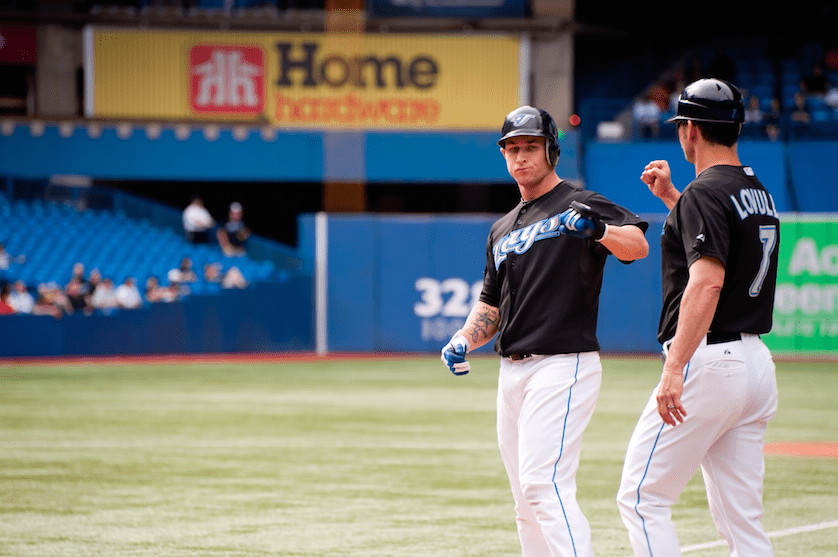 "It’s a long game, but it’s an impressive sport once you realize it’s more than just Hit A Ball That A Guy With A Beer Belly Throws."

How To Watch Baseball: A Primer for the Casual Fan

Great. So I lured you in with the promise of beautifully engineered baseball booties and you decided to watch a game to see what all the butt-fuss was all about. Cut to three hours later and your appreciation for baseball has barely increased, but your rage towards me has doubled because I told you to sit through a long-ass game and you got so bored halfway through and you could only barely, sort of, juuuust kinda see Jose Bautista’s seat meat.

I get it and I apologize because I know what it’s like to be forced to endure a game I couldn’t give less of a fart about. Baseball isn’t like hockey or soccer where there’s constant action to keep you entertained or like football where there’s constant bending over in skin-tight pants to keep you drooling. Usually, watching baseball isn’t a love-at-first-sight sort of thing (unless we’re talking about Adam Lind’s juicy-juice because as soon as I saw that hunk of chunk I was honestly all “LET ME PUT A RING ON IT. I WANT TO MARRY YOU AND WORSHIP YOUR GINGER GOATEE FOREVER AND EVER AMEN.”) So I present to you different ways you can get your fill of baseball if you haven’t quite yet developed a taste for watching the entire game.

Start off small
Look, you don’t eat a 12-inch sub in one bite, okay? Unless you’re a snake and if so, I call bullshit, because a) snakes don’t eat subs, b) snakes don’t care enough about baseball or butts to read some pervo lady’s article on it, and c) snakes can’t read (Look it up. That’s a true fact).When you eat, you take manageable bites, so do the same with watching baseball. Start off by looking at the game highlights. That way, you can see all the cool and exciting plays without all that other stuff during the inning.

Your highlight resources:
BlueJays.com
SportsNet, TSN or another sports network of your choice
Twitter (@BlueJays has updates on games in progress)

And if you’re fortunate enough to have cable, I can’t recommend the Jays in 30 programme on SportsNet or SportsNet360 enough! Usually on between 11pm-midnight, Jays in 30 shows the entire game in 30 minutes. Think of it as a beefed up highlight reel, because it includes runs scored, great plays by the defense, as well as notable pitches (usually ones ending in strike outs) and plays like it’s the actual game. Also a great resource if you missed the game because you took an accidental nap from 4-9 pm. Again.

Learn the players’ names
If you watch the highlights, you’ll find a lot of names pop up over and over again. You’ll see the Jays heavy hitters: Jose Bautista (Right Field), Edwin Encarnacion (1st Base), and Melky Cabrera (Left Field) who’s been on a 14-game hitting streak since the start of the season. Then you’ll see some insane defensive players: Brett Lawrie who’s basically a highlight reel himself (3rd Base), Ryan Goins (Short Stop/2nd Base), and very recently Jonathan Diaz (Short Stop). Now that he’s off the disabled list, you’re likely to see a lot more of Jose Reyes (Short Stop) too.

If that list of men’s names reads ZZZZzzzz to you now, just wait. It’s that player recognition that really starts to suck you in—once you see Lawrie make a successful diving catch, only to throw it across the field to first base, all in one single, fluid motion, there is no turning back. Same goes for when Bautista hits a homer, which he’s already done 6 times this season. Your puss will never be the same again. (Mine hasn’t.) And this doesn’t include the pitching, which deserves its own article in the not-so-distant future. Spoiler alert: Be prepared to read about how I want to make passionate and sensual love to Mark Buehrle because he is on fire right now.

Commit to your team
Over time, you’ll either be like, “Nah, nah, nah, this ain’t for me, Ann. YOU TRIPPIN,” which is totally valid, or you’ll be like, “Yaaassss. YAAAAAAAAAASSSS.” If you are in the latter category, your appreciation, respect, and boners for the sport and players will naturally grow the more you watch it, and so will your desire to watch complete games. Because what you don’t see in those flashy highlight reels, are the “boring” hits players have to get on-base, which are instrumental to making spectacular plays like Lawrie’s recent grand-slam happen. Or the great pitching (usually… depends on the night) that shuts out the other team. Or the cute reactions from the players when something big happens, like when they finally hit their first homer of the season (cuuuuuuute) and the camaraderie when they get back into the dugout (soooo cuuuuuuute). And most importantly, how are you ever gonna figure out which butt is your favourite if you only watch 30-seconds worth of footage? You’re crazy to think you can make such an important decision like that without knowing the players talents and seeing every possible angle of their heinie.

It’s a long game and made even longer with the new replay review*, but it’s an impressive sport once you realize it’s more than just “Hit A Ball That A Guy With A Beer Belly Throws.” And I promise you, once you find your favourite baseball bum, you’ll get it and the rest just falls into place. Like if you were some sort of Butt Cinderella looking for her Prince Charming and gl-ass slipper. Failed metaphor? Yes. Will I apologize for it? No. Will you see me at the next Jays game? Believe it.

*The replay review basically means if a team manager doesn’t agree with an umpire’s call, he can ask for the play to be reviewed. This has its obvious advantages in that it makes baseball more accurate, but what this has mostly done is made the game so much longer.