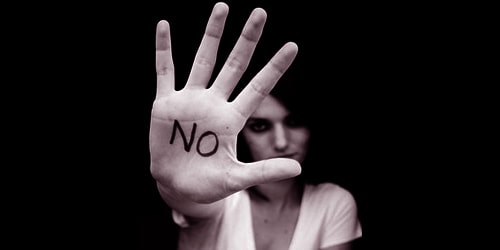 I don’t have time for it. I’m not giving an explanation, excuse or apology. I’m learning how to say “no” because all this time I assumed that “yes” was the right answer. Yes was agreeable, smart and contemporary. Yes was attractive. Yes was sexy. Yes was easy. No. It’s not.

I turned 24 yesterday. I’m still naive. The way a child is gullible. I read horoscopes. Bike without a helmet. Ghost at parties I don’t want to be at. Forget to call my mom. I have a long way to go, I know.

But it wasn’t until now that saying “no” felt this satisfying.

I never considered it before. It seemed harsh. Mean-spirited. It closed doors instead of opening them.

Saying no is where it starts. Saying no is being an adult. I don’t need to say why I’m not coming over. I’ve got better things to do than to suggest an alternative time. I don’t need to explain myself. I know what I want so why am I wasting time saying yes? It’s irrational. It’s stupid. NO.

In a few years, I’ll trust my judgement. But right now, I don’t. I make terrible decisions. I say yes when I should say no in romantic relationships. I always said yes to the shady late night texts or the over-confident marching orders of “come over now”. I don’t have self-control. That’s why I’m learning how to say “no” for future Sarah. I’m better than that. I have values. I’m saying NO.

I want to be liked. I always will. But I’m willing to push it to the side for a while. Hate me if you want. It’s bound to happen. I don’t brush my hair. My nail polish is chipped. I smoke cigarettes so I can drink more. I’m sporadic. Restless. Tired. Grumpy. I care more about books than cats. I don’t want to worry about being liked anymore. I don’t care if so-and-so thinks I’m a jerk, a tease, a bitch. That’s their problem. NO.

Power is a fantastic feeling. If you’ve ever wondered why Mark Zuckerberg wears the same outfit all the time, it’s because he wants to make fewer inconsequential decisions in the day so he can spend his time making better, more valuable ones. If I say no, I’m being selective. I’m taking back the power. I’m choosing one thing over another, for better or for worse. I’m saying no to people who waste my time. No to booty calls. No to backhanded compliments. No comment. NO.

In the past, I said “yes” to go along with the motions of convenience and cool. I didn’t know the person I was looking for. The job I wanted. The people I wanted to surround myself with. It was a game of trial and error. It was tedious. I got hurt. Cried a lot. Laughed. Cried more.

It took me a while to get here, but now I know the things I’m interested in, the friends I care to spend time with and the men I’m attracted to.

Saying no is my loaded weapon; the only way I can filter the bullshit, jerks and things that waste my time. No is the right answer.

Tags: Growing up, No, Power, Saying No

Najwa Zebian on Being Instagram Famous, Removing the Hijab & Finding Her Power