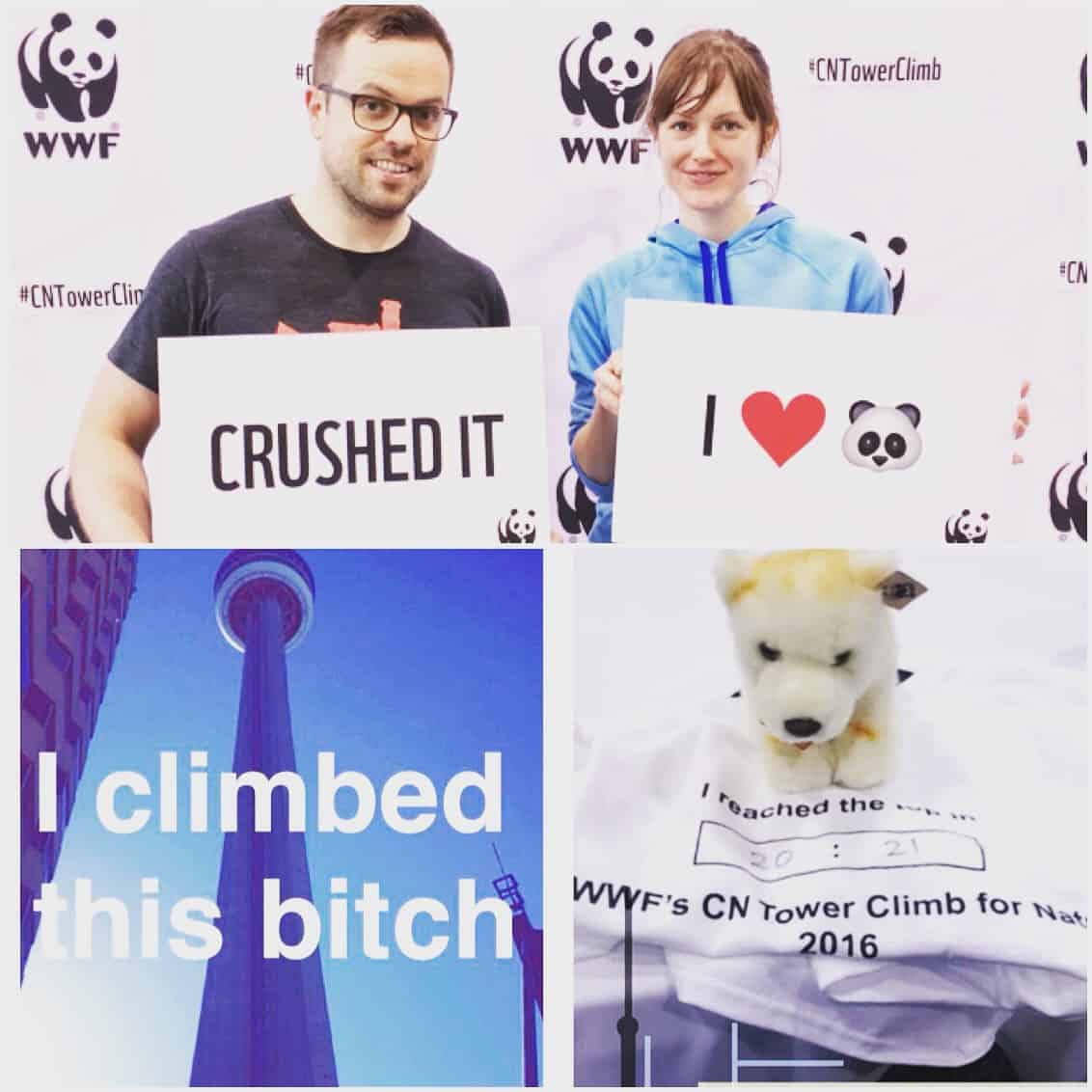 “Leonardo DiCaprio never had to do this,” I muttered, as I made my way to a corner on the 81st landing in the CN Tower’s dank stairwell. It had been the 80th floor when the burn that I had been feeling for the last twenty – okay, thirty – floors finally took over, sending me to take reprieve and putting my ego in check. It had been maybe twelve minutes since I started my climb (I didn’t have a watch) and I hadn’t taken a single break because I wanted to make good time (also because my so-called team member, Colin, had long passed me, and my inner Monica Gellar hated that).

But this wasn’t a competition. This was WWF’s CN Tower Climb For Nature, a truly altruistic affair with 7,000 wildlife lovers climbing to the top of our city’s beloved free-standing structure (once the tallest of its kind in the world) on April 16 and 17. The fundraising event, celebrating its 26th year, is the organization’s largest, and is expected to raise over $1 million in support of WWF’s conservation work across the country.

The WWF also happens to be one of Leonardo DiCaprio’s favourite charities – he recently tweeted out the WWF’s success with increasing the world’s tiger population – and the actor/environmentalist often raises tons of funds for the organization just by being, well, Leo. But in order to raise Leo-sized dollars, us mere mortals have to sludge up 1,776 steps in a seemingly endless, concrete stairwell for neither fame nor fortune – just plain ol’ personal satisfaction.

So this is what I was thinking about while I was slumped against a brick wall, panting, perspiring and praying: Leo dollars and what it would feel like to say, “Nah, I’m gonna skip the climb, but here’s a cool million anyway. Peace.”

It had been my idea to do the climb. My intense love for animals and fitness, not to mention my obsession with competition, prompted me to text my good friend Colin and ask, “You wanna climb the CN Tower with me?” Despite my current sweatbox situation on the 81st floor, back in January, the idea of climbing the skinny steeple sounded cool. The tower’s stairwell is normally closed off to the public, save for two charity events: the WWF’s Climb for Nature and the CN Tower Climb for the United Way.

And there I was in that secret stairwell (FYI: the CN Tower’s stairwell looks like…a stairwell), softly cursing Leonardo DiCapro, with my legs and butt burning and my inner competitive spirit raging. I didn’t know how many floors there were at the time (146), but thanks to the encouraging paramedic from a few floors below (there’s one paramedic on every fourth floor, or so), I knew I was closer to the top than I was to the bottom.

“You can do it,” gasped a man in his forties, who gripped the wall beside me for dear life. He was drenched in sweat, the sweatband around his head apparently now rendered useless. We nodded at each other, a gesture of sweaty solidarity. We can do this. I took a deep breath and continued up the stairs. “Remember why you’re doing this,” I told myself as I gripped the handrails and trudged up what felt like the gazillionth step. “You’re doing it for the animals. You’re doing it for your personal best. You’re doing it for Leo.”

According to the WWF, the average time to reach the top is between 30 and 40 minutes. It took me 20 minutes. I’m pretty proud of my time even though Colin, who met me at the top with a bottle of water, beat me by two minutes.

With our waters in hand, we took in the gorgeous view of our city that only the CN Tower can issue from 1,122 feet above, a mixed feeling of both accomplishment and relief permeating the chilly air.

A few minutes later we found our way to the bottom as man intended: in an elevator. It took 58 seconds.