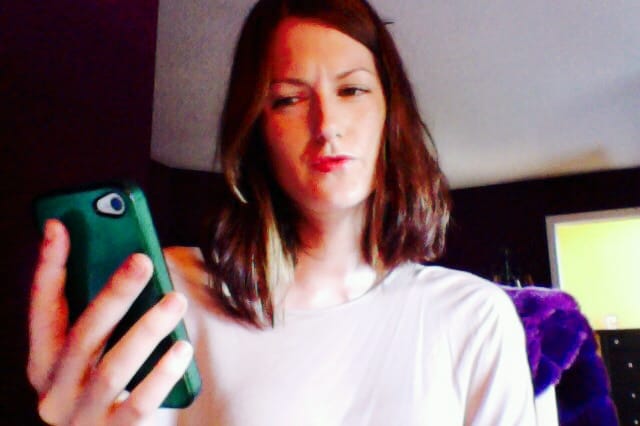 "IRL dating and relating takes work, mostly because it asks us to be real, with ourselves and with each other, including the exposure of our fears and weaknesses and our major icky, touchy-feely vulnerabilities."

Why I’m Going To Stop Dating My Phone

Not to brag or anything but I was pretty active in the dating department this summer.

Okay, by “active” I mean that my phone was blowing up more than I was hanging out with men IRL. That’s right: basically all my summer lovin’ was coming from my iPhone. Pathetic and weird and I’m over it.

At first it started with the long-distance “dating” relationship I was in – he in Manhattan, me, here. For important stuff (like planning our European vacation) or getting caught up with each other’s days, we relied on Viber for phone calls (which were almost always dropped mid-way through with me never failing to scream, “I CAN’T HEAR YOU. HELLO? HELLLOOOO?”). We used iMessages for “Fargo” and “Mad Men” updates and the odd “How are you? What are you doing? What are you eating for dinner?” text. I didn’t mind that we were relegated to static phone calls and potential Carpal Tunnel Syndrome in order to remain connected with one another. I didn’t even mind awkwardly taking the bikini mirror selfies (and the resulting neck kink) that are pretty much mandatory for intimacy in a long distance arrangement. These are the types of things you do in order to keep your LDR alive.

After seeing each other IRL and having a wonderful time together, we went back to using our phones to keep in touch afterward, but something was different. Viber calls became shorter. Texts became more impersonal. The time between the next IRL reunion became too long. Trouble was most definitely afoot.

While connecting and sharing with each other through our smart phones was fun at first, I (and, I think, he) longed for more than a smiley face. I wanted an actual face. And not a face on a screen, like, a real, human, I-can-touch-you-and-screw-you-if-I-wanted-to-face.

By the time FaceTime finally worked on my phone so we could actually talk while seeing each other’s faces, it was too late for us. We were kaput. Obviously more factors played into the relationship’s demise than Viber’s shitty reception, but when too many Friday nights are spent apart and too many “I wish you were here!” texts are sent, the writing was on the Facebook wall (or timeline, whatever). We weren’t dating each other; we were dating our phones. (At least I can say we broke up face-to-face. I mean, it was on Facetime, but at least we had that. Right?)

After the FaceTime Break Up, I connected with other men, all through—you guessed it!—my phone.

A long-time Twitter follower asked me out via… Twitter. An acquaintance who liked the articles I’d been sharing started messaging me incessantly. Old crushes sent me Facebook friend requests.

Then I started WhatsApping with a friend while he was away in Europe for six weeks. Our messages, which were often long, winding notes on what we did during the day and musings on life peppered with silly inside jokes, soon turned into straight-up sexting. We met IRL to play out those sexting fantasies, and… well, suffice it to say, we don’t WhatsApp—or anything else for that matter—anymore.

When we connect with people through our phones or any technological device, we remove the reality of the relationship. It’s so easy to share our most flattering saucy photos, to send the appropriate LOLs to jokes; in short, to be our most charming selves through texts and voice snippets. It’s easy to feel like something is growing and developing because it is just that: easy. It’s easy-as-a-friggin-Sunday morning to let someone “in” (or “out”) when there are a certain number of miles and a sweet-ass Retina display screen between you. We’re often braver (or conversely, more callous and indifferent) when clicking a chat window than we could ever be chatting with someone in-person. The stakes just aren’t as high.

IRL dating and relating takes work, mostly because it asks us to be “real,” with ourselves and with each other, including the exposure of our fears and weaknesses and our major icky, touchy-feely vulnerabilities. It was super easy for me to ignore the Guy-I’m-Not-Into’s text message just as it was easy for me to engage in a full-on flirting texting exchange with the Guy I Am Into. But put me in a bar with both Guys, and I’ll probably be nicer to the guy I don’t like because it’s MORE REAL.

So that’s why I’m done with dating my phone. Don’t worry: I’m not going Full Luddite—I get that my smartphone is a vital means of communication and can play an instrumental role in getting to know someone. I’m not saying “no” completely to the “How are you?” or the flirty texts.

I’m saying I want to see your real, human, I-can-touch-you-and-screw-you-if-I-wanted-to-face more than I want to see your texts. I want to actually Laugh Out Loud at your jokes (if they’re funny). I want to be more invested in someone than the two seconds it takes to type an iMessage (and vice versa). And I want to hear your voice (in-person on a regular basis).

Oh, and one more thing: please, don’t ever fucking break up with me on FaceTime. Or I’ll break your goddamn phone.