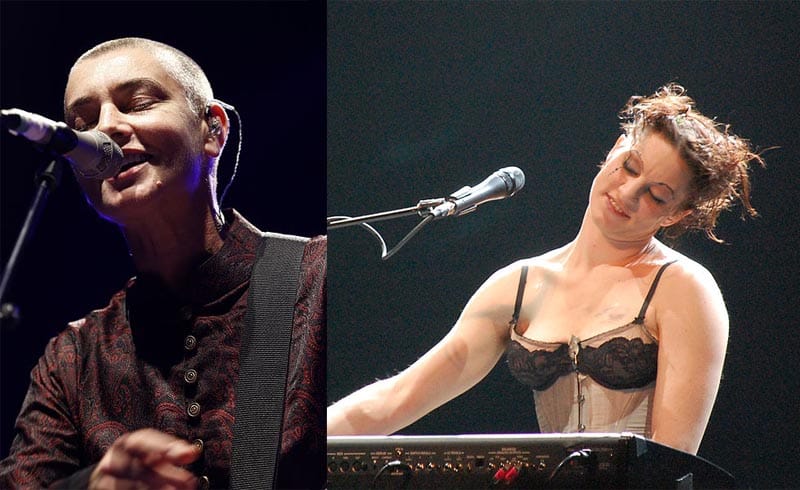 “The generational / philosophical gap indicates a major shift in how we think about, discuss and perform feminism and female sexuality.”

Inspired Reflection on Second and Third Wave Feminism via Sinead, Amanda and Miley

To which I say, yes, “I can’t stop and I won’t stop.” And then you say “Ugh, if you’re going to make a joke about a Miley song at least make it—” and then I interrupt you, loudly singing “I came in like a WRECKING BAAAAALLL.”

It’s easy to want to move on from the letter-writing controversy or to to chalk the whole episode up to a celebrity fight, but I think the conversations that have arisen from the dialogue are a good reminder of the past feminist movements that helped shape a definition of modern day feminism.

Sinead O’Connor and Amanda Palmer reflect a cross-section of our society (albeit a very specific section: white, able-bodied, economically stable women). Their opinions, and the various reactions to their opinions, represent varying definitions of feminism. While Sinead says, “Real empowerment of yourself as a woman would be to in future refuse to exploit your body or your sexuality in order for men to make money from you,” Amanda says, “We gotta give Miley (and every female) space to try on her artist’s uniform. It’s like a game of cosmic dress-up, but the stakes are high. If we’re allowed to play it, we’re empowered. If we’re not, we’re still in a cage.”

The letters are almost text-book representations of second and third wave feminism; though there are only eleven years between Sinead and Amanda, it’s kind of like listening to your mom and older sister give you advice. The generational/philosophical gap between the two indicates a major shift in how we think about, discuss and perform feminism and female sexuality.

Sinead’s admonishment of Miley’s hyper-sexual performances is representative of second wave feminism. She dismisses the star’s behaviour as the brainwashing influence of patriarchal forces and disdainfully refers to the whole act as “prostitution.” Sinead’s opinion is considered an antiquated view on female sexuality and has been referred to by many as slut-shaming. However, though the framework may be out-of-date and sex-negative, the questions she poses are still relevant: Who is defining your sexuality? What forces are influencing the way you perform?

Conversely, Amanda’s letter assumes that Miley has already asked herself these questions and is making artistic choices independently. Her letter represents a third wave of feminism which is marked by a freedom of self-expression that includes the readoption of traditional forms of femininity. It is a movement that says, as Amanda puts it, “You go girl and wear whatever the fuck you want. And play smart.” Amanda’s letter to Sinead asks that there be room for all types of artistic expression and experimentation, including nudity and sexuality, as “… the field has to encompass EVERYTHING”.

Her call for differing forms of expression hints at the departure from the second wave notion of “universal womanhood” towards an intersectional definition of feminism. We are women. But we are not the same woman. We come from different socio-economic, ethnic and cultural backgrounds. We have different bodies and different sexual preferences. These factors influence our individual definitions of feminism. The movement towards intersectionality allows for multiple views on what it means to be feminist as well as multiple modes of expression.

However, the danger of third wave “do what you want” feminism is that we will forget to “play smart” and ask ourselves the questions that Sinead and past movements put forth. In the hustle to self-define we can’t forget that many (if not most) of the issues identified by second wavers remain. The patriarchal structure (or game, as Amanda refers to it) hasn’t changed, but our tactics have. Amanda puts it nicely when she says “If men and women don’t have a constantly open dialogue about how we do and don’t (or should and shouldn’t) manipulate and play with each other, we all lose… [Let’s] make the playing field for all of us the size of the whole earth.”

You don’t have to wholly agree with Amanda or Sinead or second or third wave definitions, but by discussing and assessing them respectfully you can actively shape your opinion on gender and identity performance.

So don’t stop talking about this stuff. Talk to your friends about it. Talk to your mom and sister about it. Keep on sharing your opinions and asking questions. There are still a lot of walls to break down and dialogue can be just as strong as, say, a wrecking ball. (CUE THE MUSIC.)