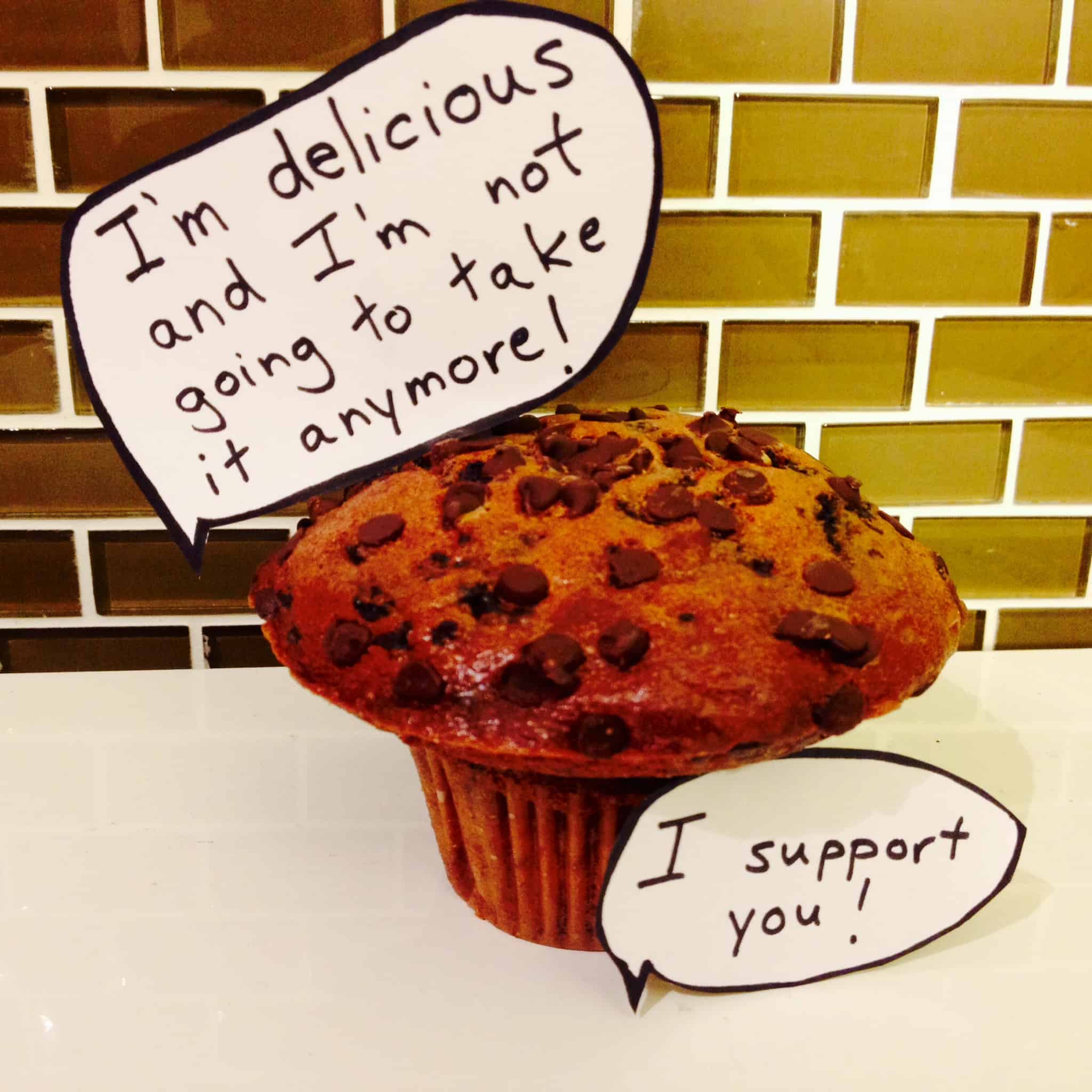 "My pants are giving me muffin top, I noticed. Let’s start there."

It Wasn’t That Bad: I have a muffin top and it’s DELICIOUS

I hesitated before deciding to write about body image this week. So much has already been so eloquently said about the subject, complete with scientific findings. My commenting on it would surely be akin to me interrupting a group of doctors discussing an ailing patient’s mysterious stomach problem by saying “Hey, have you guys tried ginger ale?” Moreover, I figured we’d all gotten the message by now, hadn’t we? We all understood that our bodies are gifts that we should love no matter what? Right? Let’s move on. Next problem.

Then I saw a news item regarding a trend I’d heard about but didn’t realize was still going strong: young girls post videos of themselves on youtube, in which they ask the world whether they are pretty or ugly. The earnestness in the eyes of some of these young women broke my heart. How did they become so desperate for this kind of validation?  I wondered, ignoring the fact that I sometimes ask my husband if I look alright several times per week or that every picture I’ve ever posted of myself on facebook was a strategically chosen, flattering shot.

Then something weird happened a few days later. Not feeling particularly great about myself that morning, I stared at my reflection in the bathroom mirror. I was poised to dissect myself, making a mental list of every last thing that was wrong with my body. My pants are giving me muffin top, I noticed. Let’s start there.

Then I stopped for a second, thinking about all those girls making “Am I pretty or ugly?” videos. Every single one of them is someone’s daughter, I thought. And if I ever have a daughter, I would never, ever want her to waste a single second on the kind of body hate some of us have become so accustomed to we don’t even notice we do it anymore.

So I mulled over the parts I wanted to scrutinize as well as the parts other people pick apart on themselves. And it struck me that many of the expressions we use to describe these parts actually make reference to something awesome. Wouldn’t logic dictate that these parts must then also be awesome? Let’s have a look at a few:

Muffin Top
This is the best part of the muffin. You know it. I know it. Seinfeld’s Mr. Lippman knew it when he created the Elaine-inspired café “Top of the Muffin to You!” selling muffin tops and discarding the stumps. While I don’t encourage this wastefulness, I would encourage you to give your waist some love by realizing what a great thing a muffin top actually is. I obviously also encourage unnecessary pun-ditry.

Buddha Belly
I won’t be so bold as to try to summarize the Buddha’s life and teachings in a single paragraph. Let’s all agree that given that his ancient dicta are still being practiced today, he had some pretty remarkable stuff to say. Many aspire to be like him, are inspired by him. Heck, his belly is supposed to bring good luck to those who rub it! How can having this kinda tum be anything but good? I had a Buddha belly when I was two. It was considered cute then and I’ll be damned if the passing of few decades are going to make it any less so.

Thunder Thighs
Oh, thunder? It’s only one of the single coolest natural phenomena in the world. It can help you tell if a storm is moving closer or further from you and provides many the perfect backdrop for evenings of scary storytelling, you know, like that story I tell myself about how everything in my life would be perfect if only I looked a certain way. Spooky and untrue. Don’t make me bring Zeus into this, thunder rules.

Crow’s Feet
Crows are incredible. These bad boys are highly social, adaptable creatures. Incredibly intelligent and resourceful, they’re also team players: often the whole family bands together to build the nest. Sure, they’re ominous. Sure, Alfred Hitchcock made them frightening. But to my mind, anything associated with a crow ain’t nothing to fuck with.

Teacher Arms
Outside of my friends and family, there are few people who’ve inspired me in the same way as some of my teachers. One inadvertently inspired me to quit smoking. Another encouraged me to find my voice through writing. Another challenged me to work harder than I ever thought possible. All of them forced me to take a moment, every now and then, to question all the things I believed. I really can’t think of any people I’d rather be compared to.