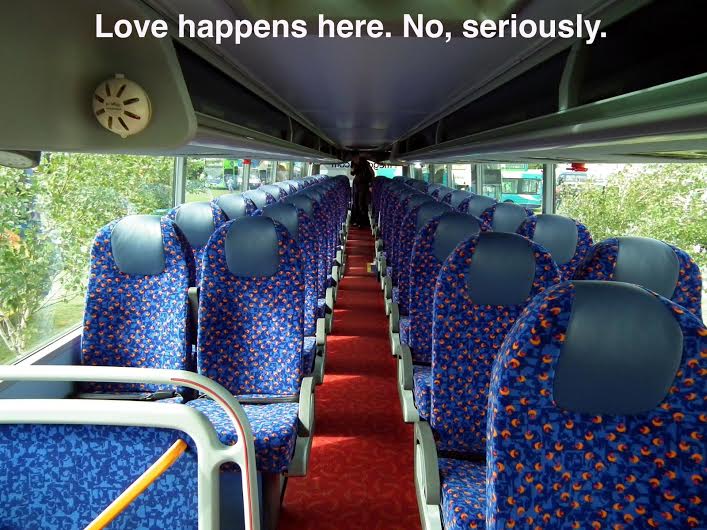 "They didn’t speak until the bus got to Kingston, where, as any good Canuck knows, love blooms."

It Wasn’t That Bad: Love Blooms on the Megabus

My friend’s bus rides between Toronto and Montreal are legendarily awful. Her carsickness keeps her from sleeping and she gets roped into conversations with bored passengers who don’t understand that she just wants to be left alone with her friends the Golden Girls. I thought of her the day after the ice storm hit the city, as I boarded the selfsame bus from Toronto to Montreal and wondered how badly it would suck.

I wasn’t trying to be negative, but c’mon, right? Between the extensive power outages caused by the storm, the plane/train/bus cancellations, and the fact there were only two days left to tie up any and all Christmas loose ends, every human on that bus had something to be stressed about.

About 5 minutes before the bus was scheduled to leave, a mother boarded with her young son. She looked exhausted. There wasn’t any room for them to sit together, so she took one aisle seat and her son took another one close by. The mom sat next to a young man. The son sat next to a young woman. The son kept looking back at his mom with tired eyes, but was otherwise quiet. After a short while, the young man sitting next to the mom gave up his seat so the son could sit next to her. The son promptly passed out on his mom’s shoulder.

The young man was now sitting next to the young woman. They were both sitting in front of my husband and I. They didn’t speak until the bus stopped in Kingston, where, as any good Canuck knows, love blooms.

But grab them, he didn’t.

Instead, the two of them chatted the entire way between Kingston and Montreal, taking only short pauses to share their food. (They both loved yogurt-covered pretzels and shrimp-flavoured chips! It’s destiny!)

Smiling at my husband, I pointed to the two of them and made a heart shape with my hands. I also may or may not have sung “The LOVEBUS soon will be taking another run… ALL ABOARD!” We listened as the two lovebirds discovered they were in the same program at McGill, but that neither of them really knew anyone. He was adept at music theory and spoke to her about how to tune a guitar. She was a med student and spoke to him about body chemistry.  I regretted never having the audacity to hit on some by using science.

Pulling into the Montreal terminal, I intently watched as the young man finally asked the young woman for her number. A high-pitched voice could be heard saying “Ohmygod, it’s really happening! Love is real and the universe is good!”

It may or may not have been mine.