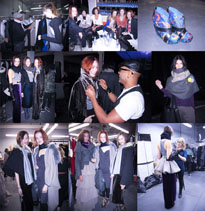 It Takes Two to Make It Outta Sight: Greta and Ezra Constantine Fall 2011

After finally convincing my skeptical cab driver that yes, there was an Audi dealership in what he referred to as the “desert” on Bayview Avenue just south of Dundas, I arrived at the venue for the Greta and Ezra Constantine Fall 2011 presentation. Always the most hotly anticipated show of Toronto’s official and unofficial fashion weeks, the Audi showroom was packed with scenesters milling about amongst A8s, Q5s and S Models. The marked absence of cocktails at this Friday evening reception was a pain felt by many, although a few plucky guests did display the preparedness of a boozy boy scout, having stashed a couple of tall cans in their totes.

The show got under way in the underbelly of the building with M.I.A.’s “Bamboo Banga” blaring over the speakers, while artificial snow blew out from above the runway. The first group of models showed looks harkening to an urban Sherpa chic, with velvet pants and maxi skirts in deep, vibrant hues all bundled up in belted wool coats, tightly-wound scarves and long leather gloves. Fall 2011 collection aside, the buzz on Twitter was also about the platform paisley boots, a special one-off for the show courtesy of Aldo.

The bursts of colour were contrasted by the Ezra Constantine men’s collection of grey and black drapey capes, slouchy drop-crotch pants and asymmetrical flowing tops. I couldn’t help but think of twenty-first century Jedi knights who wield glowing smart phones in lieu of lightsabers. When the women returned to model the finale set of floor-length, slinky, sexy jersey dresses, the crowd got exactly what they came for.

At the end of it all, designer duo Stephen Wong and Kirk Pickersgill emerged from backstage for their bow to the tune of “It Takes Two.” Indeed, these two did make it outta sight.