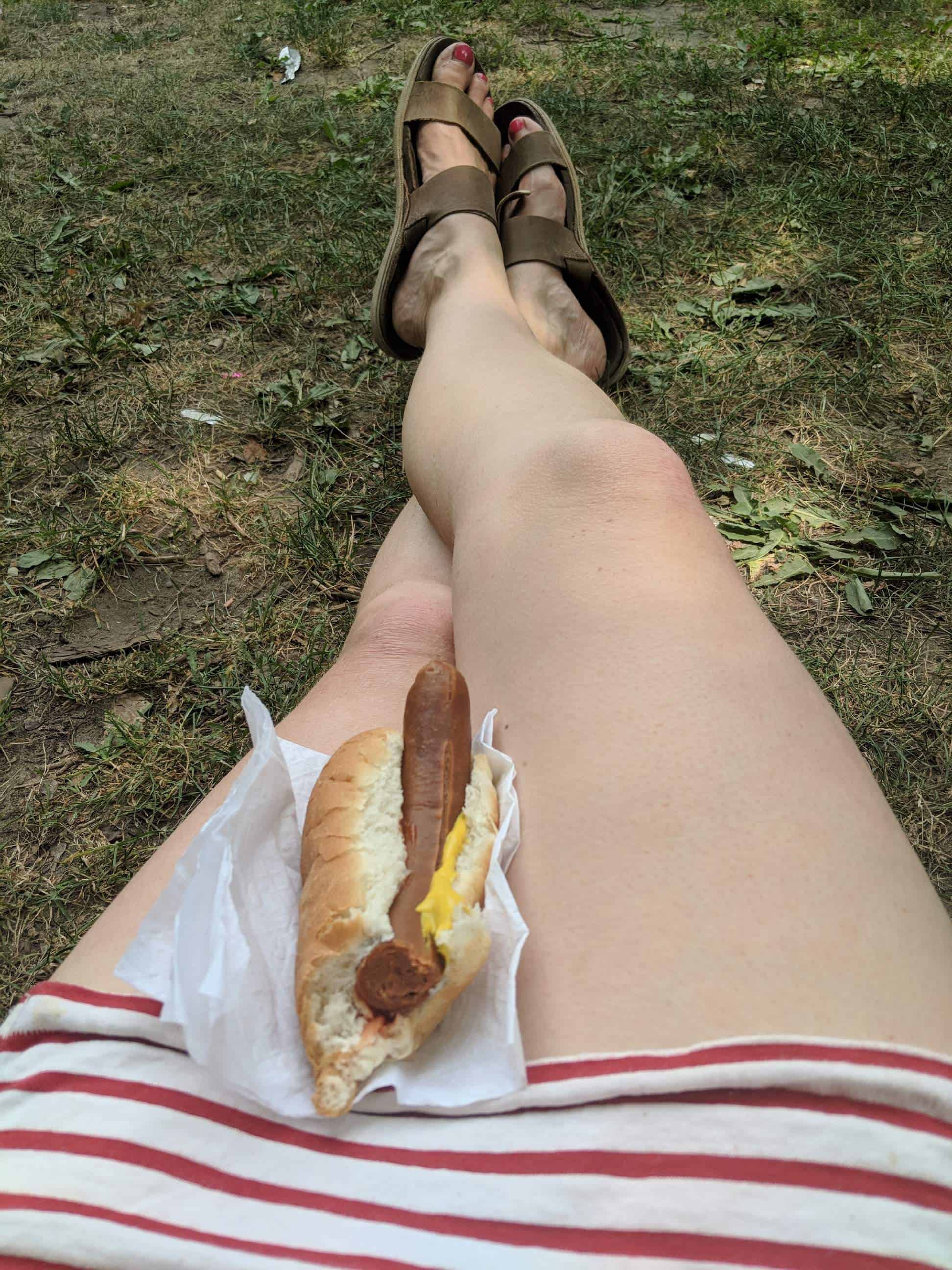 July 2018: Hot Hot Heat and the Reckoning of a Diseased Society

It is July 16, 2018: one of the hottest days on record for this year. I am leaning against a tree in Dufferin Grove Park and can feel the sweat between my breasts and thighs.

My son is not with me, but I am surrounded and comforted by the noises of children at play. Birds chirp, planes fly overhead, and kids shriek, laugh and splash in the icy cold wading pool. I bought a hot dog from the park food stand, lathered it in ketchup and mustard, and as I sit down to lean against the tree, I rest the hot dog on my legs and think for a moment that it looks like a dick protruding from my sundress.

Rustling around on dirt and grass, I finally get comfortable and gaze down at my phone. The first thing I see is Leah McLaren‘s piece on Albert Schultz, who some refer to as Canada’s Harvey Weinstein. He was the artistic director of Toronto’s prestigious Soulpepper Theatre Company who stepped down after allegations of indecent conduct were made public. Minutes before reading this, I had been promoting Virginia Woolf’s feminist classic Orlando, now playing at Soulpepper. Will you go see it?

I didn’t lean against this tree to write about this particular story–the irony of it all–but it’s yet another example of fast and furious societal contradictions and opposite mentalities at play (in this case, on the same stage).

Capitalism, colonialism, white supremacy, consumerism, patriarchy, wealth: these subjects are all related (duh). They’ve worked together for years to create a specific version of success that is synonymous with the American dream: more, bigger, better (or how the current president has lived his life). Those seduced by this idea of grandeur have turned a blind eye to those without, costing us our lives, our landscapes and our societal integrity.

Thinking about this, and where we’re at in July of 2018, had me comparing our society to the individual using alcohol to cope with life–self-medicating to hold it all together. I thought of a parent who is able to trick everyone–spouse, neighbours, teachers, colleagues, even themselves–into believing that life is working, that things are alright. Maybe they successfully pull this off for years until it unravels like a monsoon. Like the family unit that was holding on by a thread, society–as we know it–has ruptured. The wound of our sick reality can no longer be hidden with tightly wrapped bandages. It’s diseased, it’s inflamed, it’s oozing all over the place, and it’s ugly.

For many, this reckoning of the disease is the hardest part, but for others–the victims of this greed–it offers hope, opportunity. While we churn through the mess, a lot becomes clear: this sickness runs deep and isn’t easily solved. Similar to a the addicted person in denial, change is possible, but you have to be prepared to start over and imagine life a different way.

I’m not saying anything new, and I’m not a political, anthropological or cultural expert, but I wanted to write down what I’ve seen in these last few days so that if I’m alive in forty years, and my children or grandchildren ask me about the year 2018, I’ll be able to respond with clarity.

Here’s what has happened in a week, one perspective, one experience, from one vantage (and I’m only listing a few things).

– I spent two days meeting with strangers to collect toys, clothes and smart phones for a Syrian family arriving in Toronto after spending five years escaping a war. They carried and pulled five small children through seven refugee camps and have been living in a square room in Lebanon for two years awaiting bureaucratic channels and sign-offs in order to come to Canada. They finally feel safe.

– Down in Texas, asylum seekers from Guatemala, Honduras and Nicaragua are still being housed in cages in Walmart. Children under the age of five are still separated from their parents, displaced all over the USA with a disorganized paper trail that could prevent reunification, ever. On a LYFT ride to an event, I listened to Maggie Gyllenhaal and other Hollywood stars read an affidavit from a Honduran mother named Mirian whose only son–at eighteen months–was taken from her in Brownsville, Texas. (Watch #MyNameisMirian.)

– I received an email from Women’s March America that instructed millions of Americans to send wire coat hangers to their senators, as a protest to Trump’s nomination of Supreme Court Judge Brett Kavanaugh.

– Later that day, I got an email with a statement from one of America’s largest anti-abortion organizations that shared their confidence in the new Supreme Court nominee. (How these people got my email, I do not know.)

– The next day, parked outside of Queen’s Park was a giant pink truck with lettering that read, “Dear MPPs, don’t pander to the religious right. Get your hands off our sex-ed!”

– Even later that day, I had the first of two heated run-ins with anti-choice protesters holding four-foot-tall graphic signage.

– The next day, I moderated a panel that was discussing equity within the film industry.

– While walking home after that event, a man I had chatted with at the cocktail portion of event added me on Facebook. His profile picture showed him embracing Woody Allen. I didn’t add him.

– Over the weekend, I watched the Syrian mom, with whom I have corresponded for two years, gently swing in a Toronto park. She smiled and I wondered if it was the first time she was able to breathe in five years. Her children played with my child; it didn’t matter that they didn’t speak the same language.

– Last night, I sat down to watch Generation Wealth, a documentary being released later this month that basically documents how capitalism–our societal disease–has spread like unrelenting cancer since the 1980s.

And that is a snippet of what life is like today. I haven’t pointed at the major international news headlines or the season 2 finale of The Handmaid’s Tale, but this is life as I fumble through it, in Toronto, in July, under a tree, with a hotdog.

The pendulum is swinging at an erratic pace; it has been for months on end. At this juncture, I cannot tell if the heart attack has happened and we’re trying to revive, or if it’s yet to occur. All that is certain is that life cannot continue as is; we either change or die. But I choose to believe that the mother on the swing, who smiles and laughs, is stronger than all the men who conceived “the dream” to begin with.