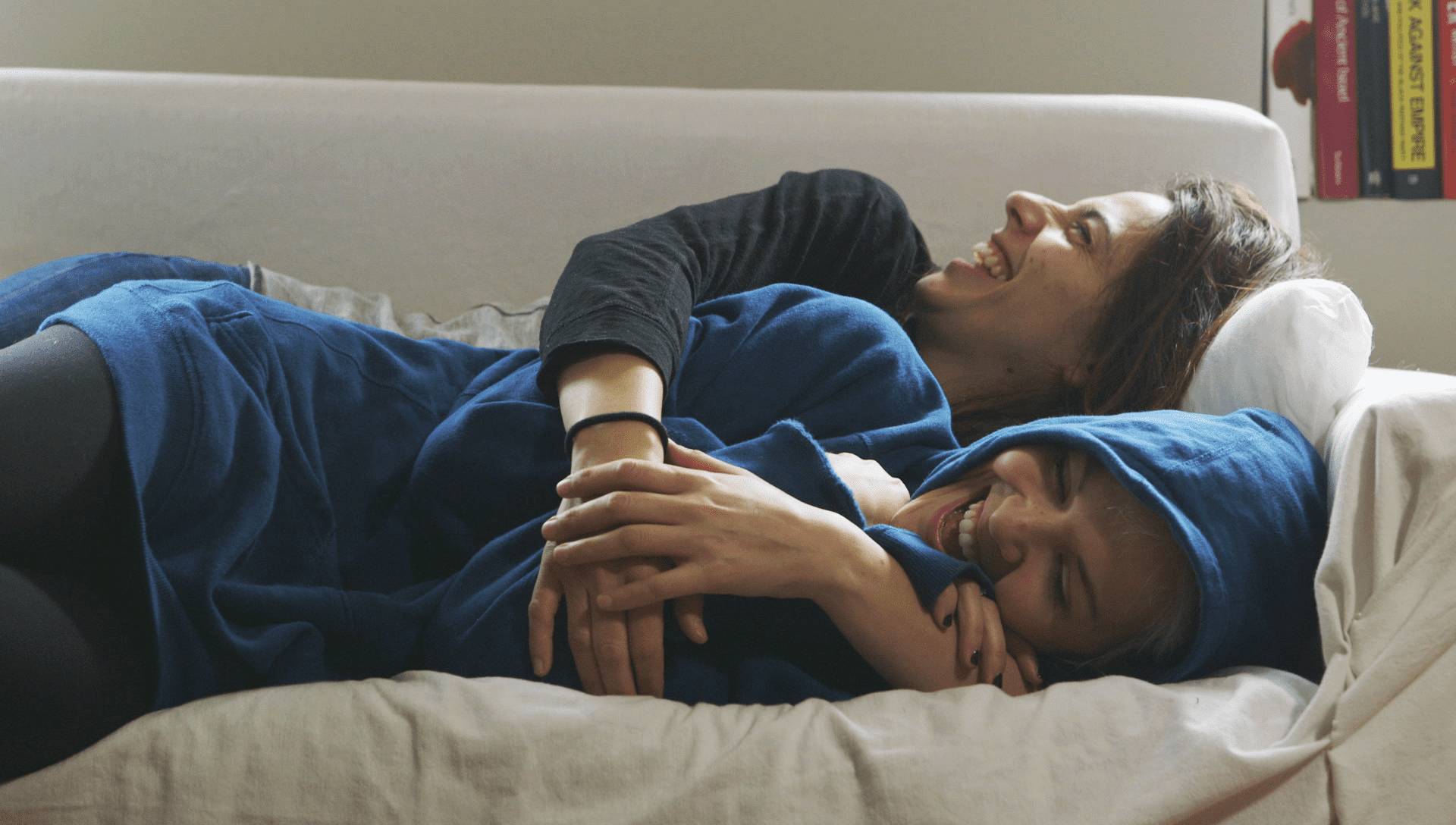 If you didn’t know, professional cuddlers have made their way to Toronto. These cuddlers-for-hire claim to help boost oxytocin, and provide some desperately needed human touch for a population that lives, increasingly, alone.

Just Cuddle is a new web series that focuses on a professional cuddler and her eccentric clients. Each episode focuses on one of the cuddler’s clients and their individual story. Many of these clients are experiencing a mental health issue. The series holds a mirror to our culture, and examines our sense of loneliness, and connection, within it. We spoke with Just Cuddle co-creators, Elias Campbell & Michael Kimber, about the series.

Why did you want to examine mental illness through the eyes of a professional cuddler?

MK: There’s this belief that keeps people from making connections, which is that they don’t deserve it. People hide loneliness as they hide mental illness. There’s this terror when you open yourself up that you’ll be rejected as not enough. People have this fear not that they aren’t special but that they don’t qualify as a normal human being. For me, including mental illness was necessary because it’s part of our world. Saying you go to a therapist or take medication shouldn’t be a source of shame. I take medication. I live with anxiety, but it’s not who I am. It’s just a part of me and my anxiety is this intense depth of feeling that makes me love the people in my life like crazy. It’s not something that prevents love. Anxiety is hope and fear and this naked desire to be in the world so much it hurts sometimes. The Professional Cuddler is a friend/therapist. A stranger you can totally be yourself with. We wanted to explore what happens to people when they meet a stranger who cares about them. What happens to someone when they break out of their shell.

EC: Professional cuddling struck us as an incredibly interesting contemporary world to explore. It’s a great hook because anyone who hears that’s it’s a real thing is a little confounded and immediately wants to know more about it.

MK: I want them to feel like it’s okay to be lonely. It doesn’t disqualify you from deserving to be happy. It’s a normal part of life that isn’t anything to be ashamed of. So often we talk about disconnection, being lost in our phones, everything being disposable. But that’s not what life is like as a millennial; it’s not what it’s like in Toronto. It’s just that as you get older you meet less people. You get less brave. We want to celebrate the bravery it takes to make a connection.

EC: Those people in your life that are so easy to overlook – a quiet co-worker, strange next door neighbour, etc. – have rich interior lives, and just because they seem lonely, alienated, or different, doesn’t mean that there’s anything wrong with them. There’s no shame in loneliness, in the need for physical touch. It’s about as human as it gets.

What was the most challenging aspect of developing Just Cuddle?

MK: It’s incredibly expensive to make a web series even on a shoestring and we paid for everything out of our own pockets because we couldn’t stand the idea it wouldn’t get made. It’s been a year of our lives essentially working a second job.

EC: Getting a crew of people together, and getting them to believe in what you’re doing, is always an immense challenge. It’s hard work and incredibly time consuming so they sort of have to take a leap of faith that whatever you’re working on is ultimately going to be worthwhile.

MK: Getting to spend weekends playing make believe with my best friends. The community we’ve created is filled with brilliant people willing to work their hearts out to make something they can be proud of. I really can’t wait for people to see what we made together.

While making this series, what have you learned about pro cuddling that surprised you?

MK: I think it’s people’s reaction to the idea that has been the most surprising. Sometimes there’s this hostility. Like why should that exist. The people who hire a cuddler must be pathetic. I think people are very comfortable with viewing women as objects. So sex work makes sense. But the idea that we live in a society where people are hiring someone to be their friend shocks people. No one wants to admit they’re lonely. Everyone wants to view it as this silly ridiculous thing and it isn’t. Men don’t get non-sexual cuddling. Usually it’s a prelude to sex and if you aren’t seeing anyone you can go completely without touch. I mean men don’t really touch each other as a result of homophobia in our society. As part of putting together the episodes we have all ended up cuddling with Winter (the cuddler) at one point or another. And the really weird thing is how good it feels. How calm you get. How amazing it feels just to be held. I think what surprised me most is how good it feels to just cuddle.

EC: Also, interesting little tidbit: Professional cuddlers have detailed contracts that clients have to sign in order to cuddle with them. One stipulation is that a client is allowed to ask out the cuddler. But only once.

At SDTC, we got a sneak preview of Just Cuddle and loved what we saw. It’s touching, funny and surprisingly real. We’d love to see the second season get off the ground, so direct your dollars to their Indiegogo campaign this-a-way.

Hot Docs launches ‘For Viola’, a new FREE series that will showcase documentaries created by and about Black, Indigenous, and People of Colour