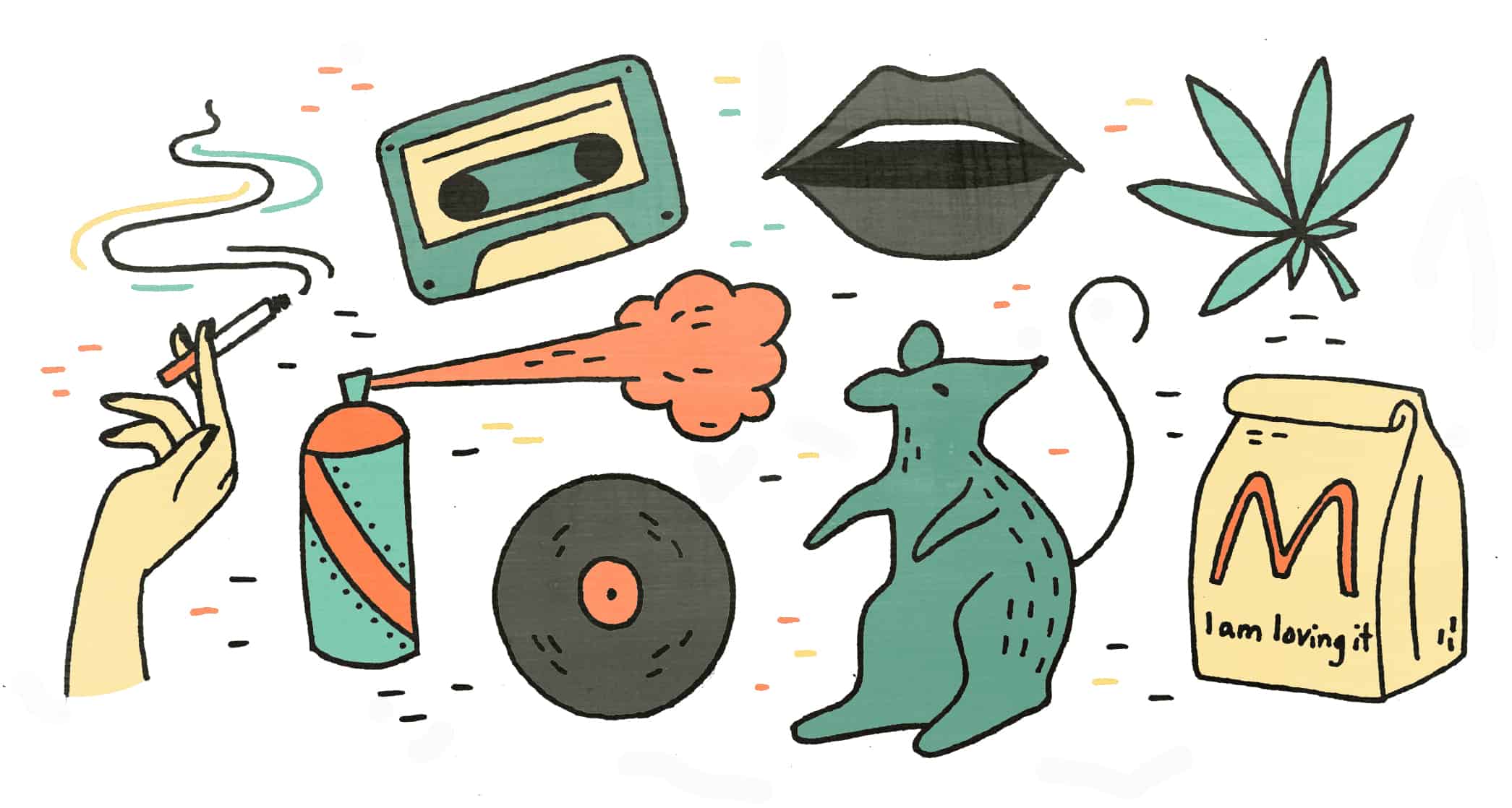 Kalinka: The Rock and Roll In My Head

I wish I could say that I left behind a prison and walked into a place that made me feel free, but the first place was not always made of bars and the second had its share of traps. Growing up on John Hughes films, I held onto the hope that one day I would wander through a field at the end of my story, embracing the wreckage, triumphant, the future blazing bright. I didn’t play the tape through, but I guess the field ends somewhere. There are edges to reckon with and edge dwellers. There are a million distractions. Perils.

In every story there is bruising. I came out of the rows of little houses like a sliver – fifteen – and found myself sitting in an old creaky house in a room covered in graffiti. I had a record player and a few garbage bags of clothes. My flatmates were brothers. One was prone to breaking into cars and buying bags of McDonalds with the profits. One was the father of several pet rats that would crawl over him while we talked. He was a gentle soul with a Flock of Seagulls mullet and a face boiling over with acne. The oldest had an endless supply of weed in his room – dim and moody – and a black light poster of “Stairway to Heaven” mounted above the bed. I would know, as I lay there often, eventually, stoned, reading the lyrics on the poster—a fifteen year old lying beside a twenty-one-year-old man.

So it goes at the fringes.

It would be true to say that I arrived to a place that was over my head and that I did my best with it. In my room, my Cat Stevens record played restlessly. When the graffiti of the room pressed too hard against me, I bought love beads for my closet, imagining I was decorating my first apartment. Really, I was domesticating wildness. I left the well-lit road. There is an isolation. There is a doubting. When the fear boils up, there are no longer familiar people nearby. It becomes easy to get lost.

Downtown, I found a hair salon that had a small showroom of new-wave clothes. I started hanging around with the owners, and eventually, I was asked to model in shows. I wore vests made out of the butts of pop cans, spandex dresses with asymmetrical hoops added in to make the wearer a sculpture. One of the hairdressers made my hair into branches framing my face. The older girls whisked me to the clubs in Detroit, dressing me up in their clothes, and patiently putting eyeliner on my wide, new eyes. The fake ID came out of their wallets, their red nail polish framing the card expertly as it was passed to me, fumbling, as I stared at the beings in black fishnets, black lipstick, leather.

I had a cousin that had short spiky hair and carried around an old lunch box like a purse. She would lend me tapes of the Velvet Underground, Roxy Music, the Buzzcocks. I would sit on her porch, smoking cigarettes trying to understand this foreign world that I had discovered, trying to make sense of the losses that had accumulated to get me here. I would sit with her in her bedroom, painted all white, with a low bed and the largest pair of men’s pants hanging on the wall—the room’s only decoration— listening to The Queen is Dead on vinyl. Kate Bush would instruct me to run up the trees. All the while I smoked menthols, felt the pulse of synth keyboards, yearned towards something.

I had woken to a totally different sun.

I made my way through crowds and crows looking for the way out and the way in simultaneously. I wove past you in dark clubs with black lights. Sat with you in old Chinese diners that let the bands play our music. We would walk in packs from the tunnel bus to the Shelter to dance to the Sisters of Mercy, smoking bidis and clove cigarettes, egging each other on. My reflections. You all had your different reasons for standing at the door to this new world. You all left somewhere. Yearned towards an entry to something. You were the waves crashing around me. The moths singeing their wings. Here is the thing about portals: they forge you in unspeakable ways. Chaos and the lamb. If I knew then what I know now, would I have disappeared like that into the space we were creating? Re-appearing in a carnival, dark, moody, dangerous? Yes. Yes, I would have taken my place amongst you, climbing Detroit’s night in legions of fierceness, in stupid youthful gestures, messing up. Getting down. I regret nothing.