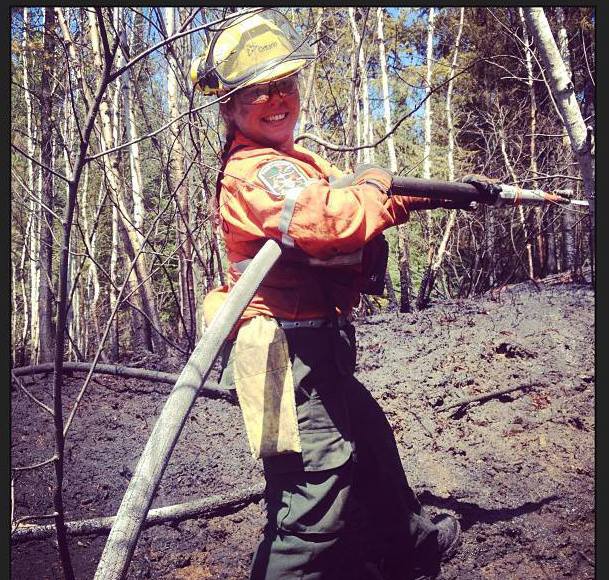 Katie Campbell has never shied away from unorthodox jobs. She’s been a life model, burlesque performer, belly dancing instructor and waitress at a strip club. But her latest gig as a forest firefighter with the Ministry of Natural Resources has proven her biggest challenge to date.

What got you initially interested in becoming a forest firefighter?

I was teaching a belly dance class and I was thinking about going tree planting. And one of my students said; “Don’t do it! Do fire instead, it’s way more money for way less work!” But I went tree planting. That was 2008. Years later I went back to school for Adventure Recreation and Parks Technician, and around that time I enrolled in the SP-100 (Ministry-certified firefighting course).

You learn about fire behavior, escape routes, safety zones, and the act of suppressing fire itself. Fires are given intensity classes one through five, with five being the most intense. They also talk about fire behaviour, whether it’s creeping (when fire burns slowly along the brush), running (fire traveling with the wind) or torching (when fire starts going up the trunks of the trees towards the canopy) – so that gives you a little bit of an idea about what to expect.

All this was completely foreign to me, I didn’t know anything about fire suppression whatsoever. But they were really informative. You go through the whole text book and complete field exercises (including a mock fire attack).

Even if you’ve passed the course, it doesn’t guarantee you’ll get a job. After that, you’re eligible to apply for a position with the MNR, but in order to be able to get hired you have to pass a WFX fit test.

What do you have to do for the fit test?

If you meet the provincial time, you’re eligible to apply in Ontario. If you don’t have the national standard certification, you can’t go on any trips to other provinces or out of the country (if they need extra help elsewhere). To meet the national standard, you have to do it in 14 minutes 30 seconds. I haven’t got the national yet and I’m determined to get it this year. I almost got it last year but ended up falling right at the end.

How did you train for that?

Last year I wore a weight vest and I walked to school and back (9 km/day), I went to the gym and ran sprints and lifted weights. This year my plan is to bring a backpack to the gym, throw about 60 lbs. in it and hit the stairmaster for about 20 minutes at a time, 3 days a week. And then lift weights on the other days. You have to re-test every year.

Then do you get a job?

Nope! Now you’ve paid about $1000 to do the SP-100, then you’ve paid about $150 to do the WFX. If you’re a first-year applicant, you fill in an online application form, then you’re cold-calling all the bases to try and get a job. If you’re a woman, your chances of getting hired are significantly increased. If you’ve taken a related course in college or university, your chances are increased. It is a government job, and the stat I’ve heard is less than 1% of applicants are women, so they do make an effort to hire women, as long as they’ve met the qualifications. I got hired (at a base near Wawa) three days before I started.

Were you the only woman?

There were 48 people in the crew system there, and 6 were women. The girls really did try to have their own thing; to stick together and sort of look out for each other, and I think that’s really important in the fire community. There’s so few of us, we might as well be united rather than divided.

How would you describe working in a remote, predominantly male environment?

I think it takes a certain personality to be able to handle it, to roll with the boys. The type of male that are generally attracted to the profession are usually type-A, alpha male, young guys. So there tends to be a lot of competition, and buffoonery in their downtime. Some of them will never see women as being capable as they are, and others would absolutely give me their full respect and see me as a peer 100%.

OK. Can you describe a typical fire attack?

We have scouting planes that fly in the sector almost daily, depending on the conditions. They are quite often the people that find the fires. They’ll call in what they see. We then fly to the fire in a helicopter, do another scouting report and give more detailed information back to base. Then the helicopter finds a safe place to land and we start to action the fire. If it’s an intense fire, we never attack the head of the fire, we attack the flank (or the rear). The head of the fire is where it’s the hottest. So we generally will just let it burn because it’s not safe enough to have human lives right there on it.

A lot of why we suppress fires is value protection – protecting human lives, and peoples’ homes and cottages. Sometimes you can divert it, depending on the fire and whats around. You can use hand tools to destroy the fuel source. So you can dig what they call a ‘fuel break’ so you remove the fuel that the fire would consume. But if it is a high enough intensity, you’ll have embers flying over that fuel break and they’ll start spot fires on the other side. So sometimes that works, sometimes it doesn’t.

Most fires that we attack in Ontario have been subject to an air attack system before we get to them. They drop water or fire foam. When we arrive at a fire, the crew leader scouts the fire, and he investigates the cause. The crew boss will normally use his chainsaw to go cut down any hazard trees, and the other two crew members will set up the pump and lay the hose and start nozzling the fire. You work til 10 or 11 at night, then up again at 6 in the morning. If the fire is hot enough, then we will free-flow the hose on it over night, so there’s constantly water on it.

It’s also really important that we chose a safe spot for our camp so there’s no risk of us getting burned over in the night.

What was it like at your first ‘real’ fire attack?

We got a call that there was a fire along the railway, and the road was washed out so we couldn’t access it by truck. So we drove out to a town called Dalton and met up with some rail guys who took us on rails to the fire. So we loaded all our gear onto this hi-rail, which is a crazy huge machine, and then they took us to the location of the fire. We unloaded everything there, and it was just go time.

I had SO much adrenaline and I was SO excited that I was trying to take on the tasks of 2 or 3 men and I quickly realized that I needed to just slow down and breathe and take my time. Our water source was down at the bottom of a very steep embankment that was loose gravel, so I carried jerry cans and a heavy metal toolbox down it, and I felt like I was walking at a 45 degree angle so as not to topple down the hill! We got the pump set up and laid some hose, and ended up having to run the hose under the train track, because trains continue to go by (shipping is important!) We had to dig a little hole and put the hose under the tracks to we could fight the fire on the other side.

What was your favorite aspect of the job?

Flying in helicopters. I’m a thrill-seeker so I love the adrenaline rush. I love trying to keep up with the boys. I always tried to do that on bike rides with my older brother growing up, so this is kind of an extension of that.

One of the last fires I was on this year, there was quite a bit of lightning so there were several fires in one weekend. Air attack was dropping water on one fire, and while they were going back to the water source they spotted another fire which is the one we were dispatched to. There was a detection plane above us, we were flying in the helicopter doing the scouting report and there were 2 massive CL-415 tanker planes dropping thousands of gallons of water on the fire below. It was pretty exciting to be in the midst of all that.

The hurry-up-and-wait. If you’re on red alert, you can’t go too far because you have a five minute response time. So you literally spend your day waiting for a fire to be called in. Those days we spend a lot of time doing odd jobs close to the helipad. Crossword puzzles. We mow the lawn. A lot.

Any words for others wanting to get into this field?

It’s a great motivator to stay super fit. A great way to challenge yourself physically and emotionally, because it really does challenge you emotionally if you’re in the bush for days at a time, working harder than you’ve ever worked, knowing that you’re going to have limited sleep in a cold tent, and having to do it all the next day. So if you’re really tenacious, a little bit competitive and love a challenge, definitely do it.