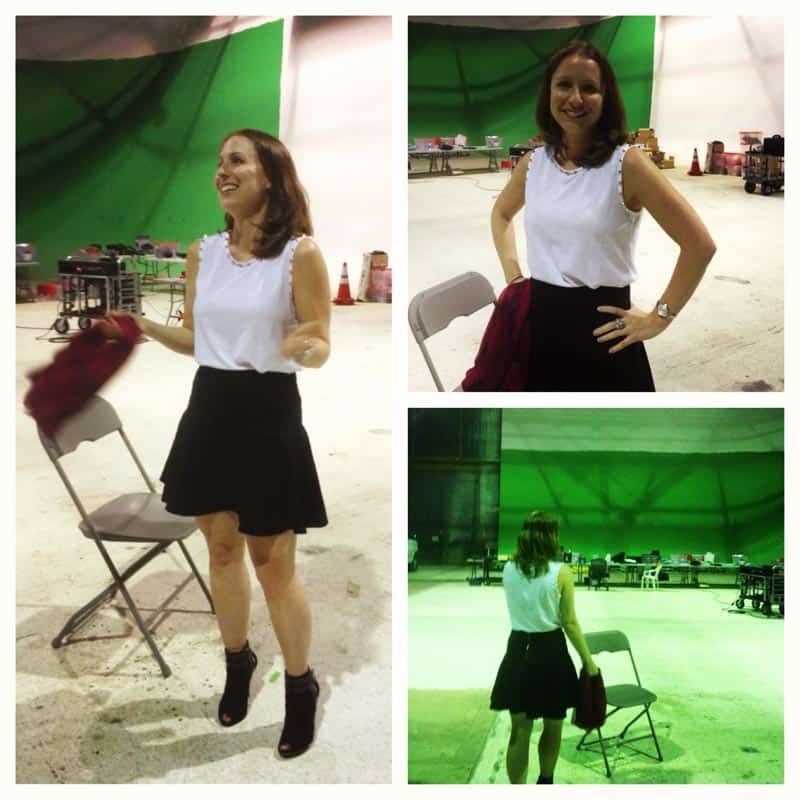 Ladies Who Lead is an interview series that features young women who have carved their place into some of the most cutthroat industries out there. Their paths to the top may not be linear; they may have not always gotten it right the first time. But these driven, savvy women have succeeded thanks to their strong work ethic and will to design their lives according to their own high set of standards.

But we aren’t just going to point and look at shiny things. Instead, we are going to decode how these women got here and how we—the unemployed, the underemployed, the misguided, the interested—can follow their lead. Shedoesthecity brings career mentors right to your screen every week. Real women, real careers, real advice.

Jennifer Leek is a production coordinator and associate producer in the Canadian film and television Industry. Currently, she works on a CBC show that legally cannot be further discussed. Woah! Based out of Toronto, she enjoys a “killer pair of heels,” having a sense of what traffic is like at all times, and inserting internet jokes into her end-of-the-day emails.

SheDoesTheCity: What are your day-to-day activities on the job?

Jennifer Leek: I make sure everyone has all of the information that they need and that they get where they need to go. That’s the broad strokes definition. To get more into it, I do anything from answering phone calls, to photocopying, to booking travel for 30 crew across the country including accommodations and ground transportation. I’m a paper pusher. I make sure everyone is on the same page, at the same time, all the time.

SDTC: What did you study at university?

JL: I went to Ryerson University for Radio and Television. But prior to that I went to U of T and studied criminology and film.

SDTC: Criminology and film. How did you arrive at that kind of double major?

JL: I wanted to be a lawyer because I was obsessed with lawyer movies and TV shows. And then I worked in a law office for seven months and said, “I can’t do this. What am I going to do?” I panicked for a couple of months and then I started talking to people about what I liked to do. I was introduced to the Radio and Television program at Ryerson and I was like, “You can go to school for that?!?!” I had no idea how to get into it. But once I got into RTA, I knew that this is what I was supposed to be doing. It just instantly felt right.

SDTC: How did you go about actually beginning to work in the industry?

JL: RTA was a two-year program when I went. And from there, there were mass emails that would go out about job postings and volunteer positions. I volunteered for Canadian Idol’s season three auditions. And in my head I said, “I am coming out of this with a job”. And so I worked my butt off during the audition days, got noticed, and got a job.

SDTC: What did you do to set yourself apart and get that job?

JL: I noticed that when people didn’t seem to be doing things, they got sent home. And I thought, “I just have to stay busy.” So I would do things like relieve people from their jobs so they could go to lunch. I was always working, so they didn’t send me home. They noticed that I was taking the initiative to do these other tasks without even being instructed, and that I could pick up on them easily. So next, they asked me to stay on for the celebrity days and at the end of the week, they asked me to stay on for the summer.

SDTC: Do you have a mentor? Are you a mentor?

JL: Unofficially, I would say that Lena Cordina (production manager and producer in television and film) is my mentor. We’ve worked together for about five years now. I am leaning into more of a mentor relationship with her to start moving into production management, which is where I want to go next.

I think that she’s a very smart woman and she wants people to learn and to grow. We’ve recognized that in each other. It’s something that I’ve learned and tried to pass on to others.

SDTC: How does one find a mentor?

JL: For me, I was juggling between two production companies. We know, in this world, connections make the world go round. I was steadily employed; it was great. But I was at the point where I wanted to start doing more. I had this opportunity to work for some new people and luckily enough, within two weeks of working for them, they offered me a position that I would not have touched at the other two spots for another couple of years. So for me, it was lucky that we found each other at the same time. Lena took a chance on me, having not coordinated before. She said, “I think you’re smart enough and I think you can do this,” and I said, “You are right. I can and I will.”

SDTC: What advice would you give to someone trying to break into the business?

JL: I would tell them to give 100 percent, all of the time. Hard work does pay off, and karma is king. I would say to have patience, use common sense, and to always pay attention to what is happening around you. Keep your ears open. If you don’t, you can’t answer questions when you’re asked. And don’t rush yourself. You’re not going to come out and be a producer right away. I’m sure the odd person is, but it doesn’t always work like that. Everybody has to start at the bottom and work their way up, and that’s actually the best way to learn everything. Because if you push ahead too quickly, you will miss things and it will hurt you later. And try not to burn bridges because as big as the industry seems, it’s actually quite small. You will always run into people that know people. You don’t want to get burned for something that was small, and miss something that could be a huge opportunity.

JL: I have graduated, so to speak, in work attire. My go-to is that I try to wear a cute but professional outfit and I love a killer pair of heels. I never know when a network executive or the owner of a production company is going to walk through the door. I want to look presentable for them, and I should. It’s about dressing appropriately for what you have to do, but still looking professional for the guests that come in—the higher ups. You feel better when you’re put together, so why show up to work in pajamas? I love yoga pants, but there’s a time and place. Sometimes, Saturday at the office is that place. But maybe not Monday at the office.

SDTC: What are some of the changes that you’ve seen in the industry between the time you started and now?

JL: I started in the industry in 2005. I think the biggest shift recently is the internet and social media involvement. It’s opened up a whole other side to production in terms of creativity and tasks to be done. There are departments now that exist that didn’t exist before, and I think it’s a change for the better. I think it’s fun to watch TV like a live event and tweet about it. And web series are going to be huge. They’re developing, which may present an opportunity for people to do these smaller projects sooner in their careers.

SDTC: What do you think are the most important qualities for a person to have in order to succeed in TV and film?

JL: Hardworking, kind, and honest. It sounds so cheeseball, but those are the people that you want to surround yourself with. And when you get working with a good crew, those are the people that you want to hire again. People that will work hard—not just for you, but also for the product. You’re all working towards a common goal and that’s to make a good film, television show, whatever. And anyone that’s working against that—it’s ridiculous. It’s so simple: hardworking, honest, kind, smart, and will bend over backwards when you need them to because they know that on the next one, you’ll be there for them. And maybe next time, they won’t have to bend so far back.