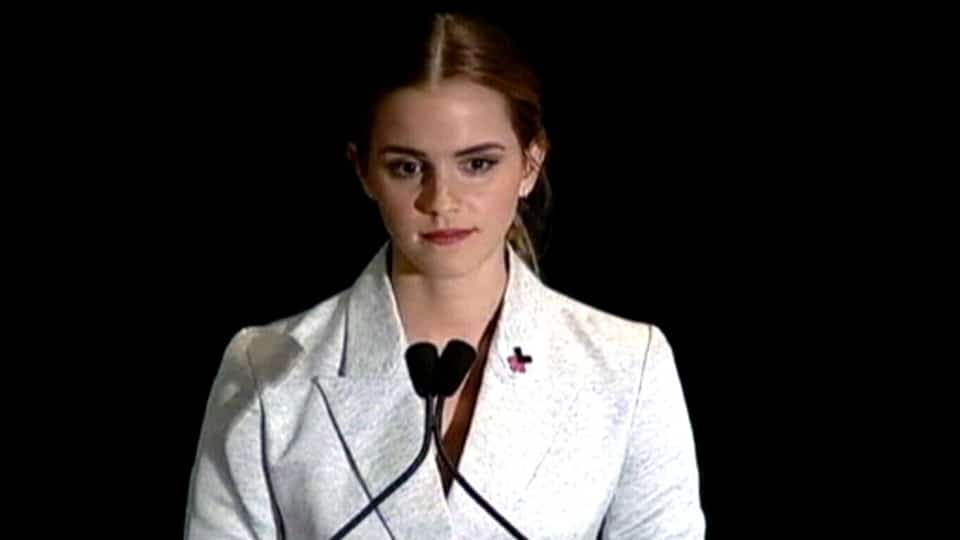 "4Chan rallying for the release of Watson nudes as "revenge" for her call for gender equality only prove how badly we need it."
Events & Culture

[NB: This morning, The Verge reported that 4Chan’s threats were possibly a hoax. Apparently, visitors of EmmaYouAreNext.com were instead directed to a viral marketing site that claims “none of these women deserve this” and invites visitors to “join us as we shut down 4Chan and prevent more pictures from being leaked.” 4Chan itself has yet to release a statement, but if this is true, it’s still pretty fucked up. And, actually, just proves the exact point we make below.]

Earlier this week, Emma Watson delivered a flawless speech at the UN about the importance of gender equality. There, she urged—nay, invited (so polite!)—men to participate in this cause, launching the HeForShe campaign which aims to help make people “see gender as a spectrum instead of two opposing sets of ideals.”

“We should stop defining each other by what we are not, and start defining ourselves by who we are,” she continued. “We can all be freer, and that is what HeForShe is about.”

Brilliant, right? Hello, another way for everyone to see and understand feminism as a universal concept, and less as a “woman’s thing.” Especially since feminism is for everybody, and we know this. All of us here know what feminism is—equality between men and women, hooray!— how it benefits all genders, and how much better everyone’s lives become when it’s a value we start to uphold. So of course, everybody must have been thrilled when Emma Watson—an A-List movie star—stepped up to say, “HEY. This is something we really need to talk more about. Ladies, I’ve got your back.”

Well, of course not. Why would anybody be less than thrilled to work towards abolishing the patriarchy, and with it, the myth of conventional masculinity, gender conformities and, rape culture? Easy: because if we get rid of those things, it means some people will lose their only means of control.

I think that’s the only way we can explain the trolls behind 4Chan, who, in response to Watson’s speech have threatened to leak nude photos of her. They have also launched a site called, “EmmaYouAreNext.com,” which we will not be linking to, and which includes a picture of Watson wiping away tears, and a countdown to Friday night, the proposed release date of the photos. It is fairly classic in its misogyny: threatened by a woman’s strength and/or independence? Strike back with hurting her, sexually.

Somewhat ironically, 4Chan rallying for the release of Watson’s nudes as “revenge” for her call for gender equality only proves how badly feminism still needs loud, visible advocates. While 4Chan and anti-feminist protestors seem to have unlimited counter-arguments (she was asking for it, why take nudes in the first place, feminists hate men), what they seem incapable of raising are valid discussions, questions, and concerns. They don’t inquire about books to read or stats to investigate or ask to speak to women—women like you, me, and the other billions on this planet who live EVERY DAY in fear of being sexually harassed, assaulted, or even killed, just because of their gender. They don’t have the guts to say, “I’m afraid of this because I don’t understand it.” The best they can offer is a more immediate version of the systemic objectification women experience in some capacity every day.

For the record—as we’ve said before—there is nothing wrong with taking nude photos. What is wrong is viewing those photos without the expressed consent of the person in them. If nude photos of Emma Watson were to be stolen (just like the photos of Jennifer Lawrence, Vanessa Hudgeons, and hundreds of others have been stolen), it isn’t the content of the photos that we should be upset about. These are grown-ass women who are entitled to participate sexually with whomever they choose, however they choose. But they have not chosen to do so with us. They haven’t chosen to share these images with 4Chan, which is what would make the addition of Watson’s photos another sex crime.

4Chan is threatening to make Emma Watson a victim of a sex crime, simply because she had the gall to ask not to be.

How royally fucked up is that? Sex as a weapon. Again. And not only “a woman has been sexually degraded in public again,” but as “a woman has been sexually degraded for the purposes of controlling and silencing her,” again. Emma Watson didn’t stand on stage calling for the abolition of men. She didn’t say they were the enemy or that women will inherit the earth (though for the record, I do think Laura Dern was onto something in Jurassic Park). She stood up and asked men to see us as equal beings. Which we are not, and will not be until a call for equality is no longer met with “looks like someone’s just ASKING to be sexually commodified, great.”

But let’s not for a minute think Emma Watson wasn’t ready for the retaliation she’d face; that she hadn’t assumed that such a “controversial” (ugh) position on such a large platform heartbreakingly means that you will be met with resistance from all types who will look to hurt, embarrass, and destroy you. She’s tough. (Girlfriend slayed death eaters, remember that.) She’s smart, and if she didn’t know you’d do exactly this, she knew something ridiculous would be levelled at her in the wake of this. But she probably also knew that all the scared, little babies at 4Chan were only going to do something deeply misogynist, therefore reaffirming everything she said in her speech. Even if 4Chan and their cronies make true with their threat, it won’t be Emma Watson who looks foolish, it will be the cowards who use sex crimes to assert their strength, who feel like nothing and so try to make women feel like even less.

Fuck them. We won’t feel like less, and neither will she.

"4Chan rallying for the release of Watson nudes as "revenge" for her call for gender equality only prove how badly we need it."