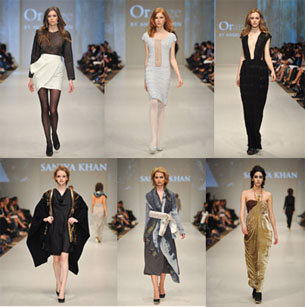 There was no orange at Orange by Angela Chen. This is probably for the best; the Vancouver-based, Parsons-trained designer’s collection was more of an ode to office chic than to the delicious fruit. The 23-look line, entitled Contrast, offered exactly that: bright whites against strong ebony, resembling a classic feel for a modern woman.

Sheer blouses tucked into asymmetrically draped skirts were a constant, as were sexy knitted tunics –both knee-length and cropped. The sheer and knitted fabrics merged in pieces like a white mini dress with a navel plunging neckline covered in a translucent layer.

The final look was a stunner: a floor-length cocktail gown with another navel reaching neckline –this time sans the sheer safety layer. A daring dress for a daring girl, which stood out in the otherwise simple line. Chen veered away from the youthfulness of her Spring/Summer line, which emphasized flowing fabrics and a laid back quality. Looks like she meant serious business this time; her line was classy with an elegant romance.

One hour later Saniya Khan showed off a little something different; an east meets west hybrid that could only happen in a salad bowl city like Toronto.

The Mississauga based textile artist implemented her roots from Pakistan, Afghanistan and Persia in her collection, which featured flowing tunics, velvet scarves and a contemporary twist on the sari. It sparked the imagination with its exotic orientalism and its bright colours – a truly different experience after seeing the urban office chic look of Angela Chen.

Khan’s degree and distinction in textile design is apparent in her work, her velvet pieces are bejeweled, dyed and embroidered to perfection. The fabrics are lavish and plentiful, ranging from above-the-knee silks to long sweeping gowns layered with flowing thick capes.

She sells her pieces around the North America, Europe and Singapore at prestigious retailers like Holt Renfrew and Harrods.

It was a worldly day for fashion in Toronto!