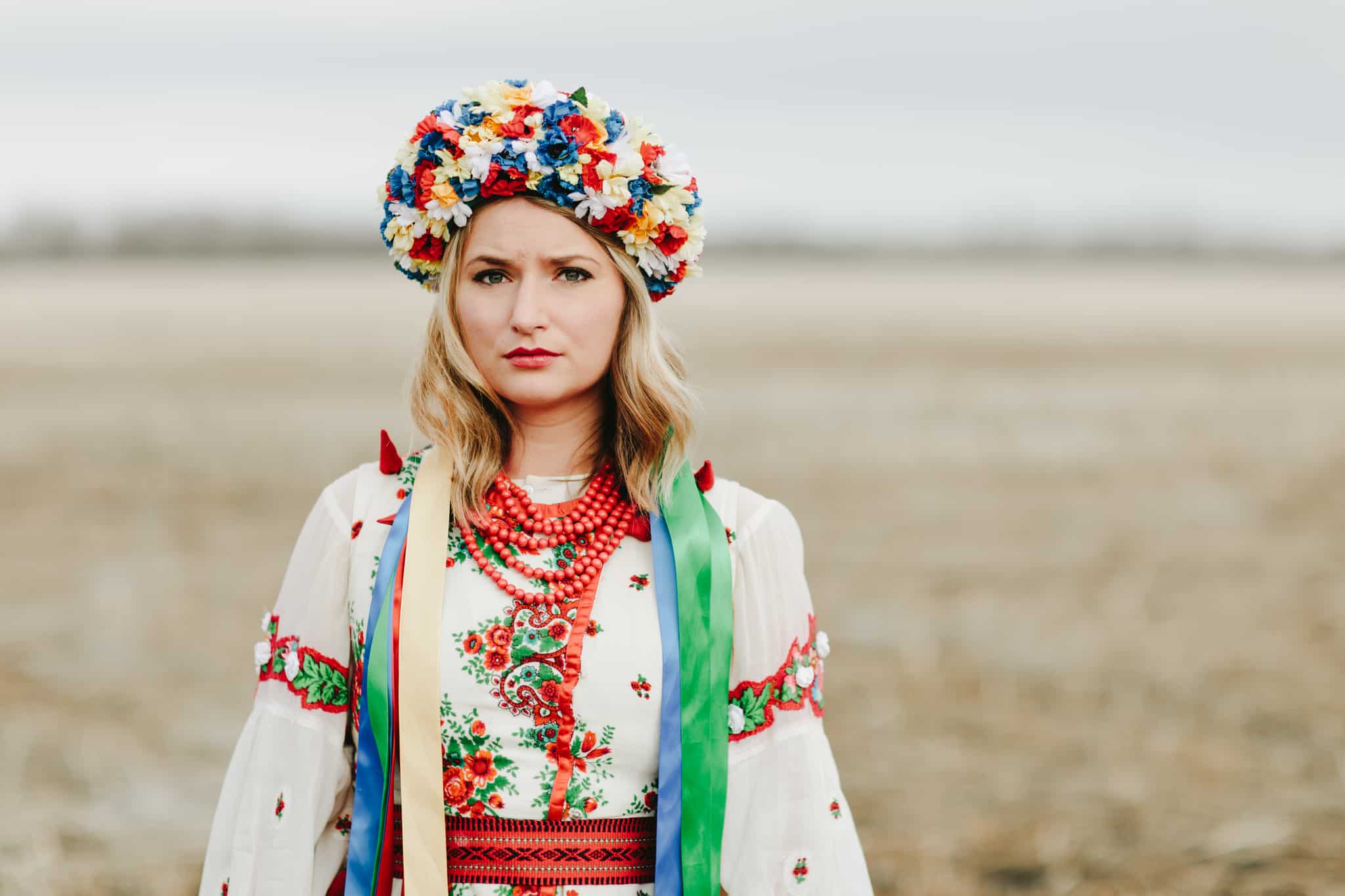 In Blood of Our Soil, Hania, a Ukrainian-Canadian woman, makes a discovery that gives her new insight about her Baba’s struggles during WWII. Determined to gain a deeper understanding of both her personal and cultural history, Hania’s search for answers brings her to the edge of the ongoing war in Eastern Ukraine. In weighing the current situation against her grandmother’s history, Hania is forced to recognize how history repeats itself.

We spoke with Blood of Our Soil writer Lianna Makuch about the play this week.

SDTC: How does Hania’s story mirror your own?

LM: It’s all inspired by my own history; it’s mostly true. I’m a second-generation Ukrainian-Canadian, and I would spend summers with my Ukrainian grandparents at their cottage. I came across my grandmother’s journal, which chronicled her immigration from Ukraine during WWII. The account was really powerful and descriptive. I had heard stories about my grandparents living through the war, but to read it written by my grandmother was a different thing.

One line that she wrote that really struck me was: “How can our land not but be fertile, when so much blood—both Ukrainian and foreign—has continually seeped into it? It shows that our enemies must love our land more than we do, for they fight for it ceaselessly. Will we live to see that moment when our people join the circle of free nations?” I came across this just before the revolution of dignity broke out in Ukraine at the end of 2013. So while the revolution was happening, I was here in Canada. It was huge news for Ukrainians in Canada. Everyone was glued to the screen. My grandmother’s words just kept ringing through my head. Following the revolution, there was a lot of hope, then Russia invaded Crimea, and following that, they invaded the Eastern part of the country, and the war has been continuing since.

When all of this was happening, I felt compelled to do something. I wanted to do what I could, which was create theatre. I started working on a piece that was reflective of my own experience as a Ukrainian-Canadian, the separation from the Ukrainian homeland, what it is to have that separation, and to see war happening in the land that my grandparents spoke about so fondly and were ripped from. 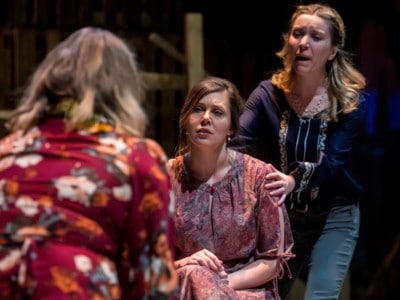 Were you able to go to Ukraine?

I did a workshop presentation where I focused mostly on the journal. Then in October 2017, I travelled to Ukraine with a couple of members of my company. We went throughout the country, including to the Eastern parts where war had passed through. We conducted close to 50 interviews with people who had been impacted by the war. We were about 5 km from the front line at certain points.

Part of the show is a reflection of the Ukrainian-Canadian experience, but at the heart of it, the show is about drawing awareness to, and giving voice to, those people that we interviewed. I really wanted to focus on the human impact of war, and draw parallels between my grandma’s experience of WWII and what’s happening now. 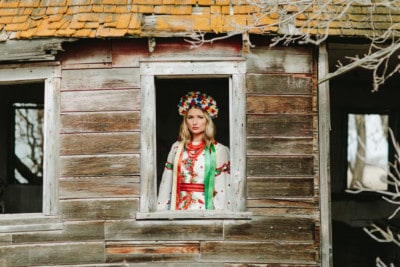 Why don’t we hear more about this war?

Within the Ukrainian-Canadian community, everyone knows and there is a lot of action. But it’s now in the fifth year of the war. It was big news when the revolution happened, and then when Russia invaded Crimea. I think when something is happening for as long as it is, and is confined to one part of Europe, it becomes less sexy.

Also, there’s a lot of disinformation around what’s happening with the war and a lot of misunderstanding. Russian aggression and the Russian invasion has been carefully masked, so I think people misunderstand and think it’s a civil war, when it’s not. 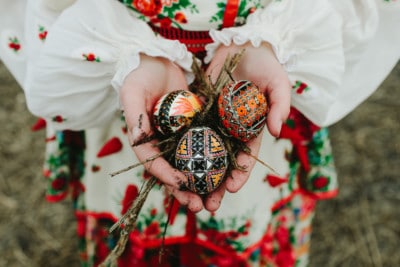 In the interviews you conducted, what was especially challenging to hear?

I think the most challenging thing for me is the feeling of powerlessness. Because what can I do? Most people we met and interviewed—those on the front lines—are the elderly, people with disabilities, people who are internally displaced. We visited a bare-bones hospital with no heat filled with a lot of older women; seeing that was challenging as well. The resounding thing I heard was that they don’t want to be forgotten. They want their stories to be known.

How have centuries of being oppressed and maligned shaped the Ukrainian psyche?

There’s a binary approach. Part of the country does feel connected to Russia, particularly the Eastern part. Ukraine as an independent country is relatively young (it was formed in 1991). It was a difficult time when they separated from the Soviet Union, so people from older generations might have had a hard time finding work, whereas in the USSR, they had their job.

But amongst the young people, it has shaped a strong-willed spirit. It’s really obvious when you spend time over there. All the young people were on Maidan Nezalezhnosti (Independence Square) during the revolution. They are activated and empowered when it comes to their future. It’s not the same here. It’s really apparent how little activation there is among young people in Canada. When your country and future aren’t being threatened in such a visceral and apparent way, it’s not as necessary. But in Ukraine there is a very strong spirit. 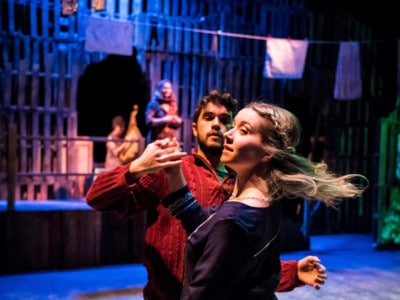 How did reading your grandmother’s journal change your view of her?

It was written by my paternal grandmother, who passed away when I was young. The play is inspired by a mosaic of all of my grandparents’ experiences. I remember her from when I was young. She was such an artist; she did a lot of embroidery and we still have all those things. When I read that, I got to know her as a young woman; she would have been around my age when she wrote it. It activated my imagination, imagining myself going through all the things she was going through. It made me see the human side of my grandmother. And it made me dive deeper into my personal family history. It made me think of my grandparents as humans—the baba who makes me pierogies. It made me ask more questions. I learned about my other grandmother’s experience during Holodomor, which is Stalin’s man-made famine that happened in Ukraine from 1932-33. They estimate 2-8 million people starved to death during that, and my grandmother lived through it.

My grandmother used to have night terrors in the middle of the night. I’d come in and wake her up. It was always that “they were coming to steal us.” At the time, it was like, Oh, Baba is screaming again in her sleep. Go wake her up. I look back on that and wonder what sort of horror and trauma she went through. I know she was stolen by the nazis and essentially enslaved by them.

A lot of people from different backgrounds are able to connect with this story because we all have grandparents. We all have people in our lives who we loved and who have shaped us and take care of us. When we grow up, we see them in a different light and wonder what it was that made them who they are, because they made us who we are.

Blood of Our Soil runs March 7-16 at Tarragon Theatre Extraspace. Get tickets here.