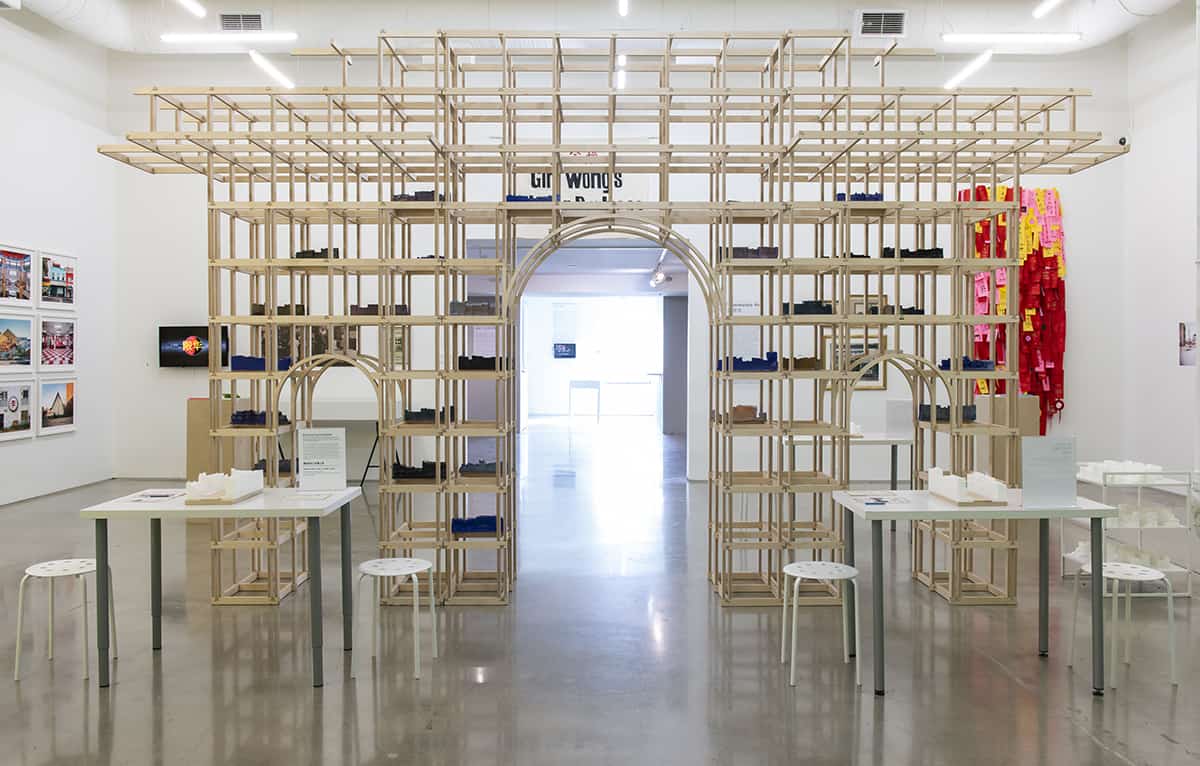 "Chinatown is born out of resistance to displacement and in response to othering."
Art & Design

"Chinatown is born out of resistance to displacement and in response to othering."

Linda Zhang is a professor of Interior Design at Ryerson University’s Faculty of Communication and Design; she’s also the brains behind “ChinaTOwn,” an art project in the form of a board game where players must imagine the future of Chinatown.

With Toronto neighbourhoods constantly being bulldozed and gentrified, often losing their character and history in the process, Zhang’s game isn’t just timely, but urgent. How are communities affected? What is being lost? What history is not being considered? These are all questions that Zhang’s board game raises.

“ChinaTOwn” is currently being shown at Griffin Art Projects in Vancouver as part of the “Whose Chinatown?” exhibit.

Fascinated by her creativity and ingenuity, we connected with Zhang to learn more.

What inspired this project?

This project is inspired by memory. Who holds the right to decide what gets remembered? Conversely, the right to forget? The project “ChinaTOwn” including the installation “Your Future Heritage(s) of Chinatown East” tells the forgotten stories, willful omissions, and accumulation of silences that exist beyond Toronto’s official heritage definition of its Chinatown neighbourhoods. They explore what marginalized communities have known for some time—all that is written is not necessarily all that is, and what is remembered extends far beyond what is recorded.

The project emerged out of a desire to respond to these “official” voids. In the field of architecture, what gets deemed worth preserving, what gets commemorated in the built environment, versus what gets expropriated is decided at an institutional level. However, these institutionally supported histories often overlook the intangible heritage(s) and the community ways of life of so many of its residents, including Chinatown.

So the project began when I moved to Toronto in 2018 and started 3D scanning Chinatown West and East annually just to make a record of it. In architectural conservation and preservation, 3D scanning is the standard method to document historically significant buildings and these 3D scans are then used to preserve and maintain these sites. Currently, comprehensive records of the urban and architectural development of Toronto’s Chinatowns don’t exist. Being a drone pilot and having access to 3D scanning software, I felt it was important to make these records while the neighbourhood was also rapidly changing. 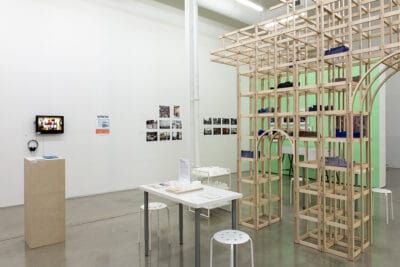 Photo of ‘Whose Chinatown?’ Exhibit at Vancouver’s Griffin Art Projects

Can you recall the first time you explored Toronto’s Chinatown? When was it and what memories have remained clear?

Growing up in South-Western Ontario, my family used to drive hours to come to Toronto’s Chinatown just to get groceries. They weren’t available anywhere else back then, only in Chinatown. It was then, and is still in many ways today, a point of entry or access to a disappearing ancestral way of life.

What do you love about the Chinatown neighbourhood and community today?

I only recently returned to Ontario after being abroad for the last decade. Being away and living in countries and cities which did not have a Chinatown made me more aware of its importance. A question I often think about is “What is the Chinatown we wish to leave for future generations?” as well as “Who did/does/will Chinatown belong to?”.  These sentiments are echoed in the exhibition entitled “Whose Chinatown?” at Griffin Art Projects curated by artist Karen Tam, of which my project is only one of many exhibited works.

Why a board game? And what is the ultimate mission for players?

This project is about imagining a shared future for Chinatown—one which emerges through dialogue and through difference.

First, I wanted to use this project as a means to give access to this 3D scanning technology to the community, so individuals could decide what gets preserved. So on one hand, I’ve taken 3D scans of the Chinatown East and 3D printed them into game pieces so they can literally be put in the hands of people. On the other hand, as visitors finish playing the game, a docent is available to teach them how to use a 3D scanner. They then 3D scan their finished game board, their vision for the future of Chinatown. In this way, we also literally put this institutional preservation technology into their hands.

Second, I wanted to use the game format to spur dialogue and conversation.  There are over 99 game pieces. However, the game board only fits 10-12 pieces depending on the size of the buildings. As a two+ player game, which buildings are selected and how they are arranged is something that has to be negotiated. In playing the game, the players, sometimes even strangers, are invited to have a conversation about Toronto’s Chinatown East and how to give value to things. It simultaneously acts as a form of public engagement to spur discussion on Chinatown, at the same time, it also allows my research team to collect data to identify any trends and needs amongst participants and their various demographics.

Finally, we then take these 3D scans and cast them in porcelain making them both precious and fragile.  These porcelain casts are then added to the wooden gate scaffold. Here the scaffold is from a 3D scan of Chinatown East’s Zhong Hua Men Archway. It represents a monolithic, easily digestible but often othering representation of Chinatown, typically supported by institutional narratives and histories.  This scaffold is then overtaken with porcelain games pieces played by people, with the community’s vision for how Chinatown should be represented. It’s an idea of co-constitution as a framework for creating and preserving spaces that encompass the multiplicity of perspectives, identities, and subjectivities of their inhabitants. In so doing it is also about trying to place things in dialogue with one another, allowing space for difference. 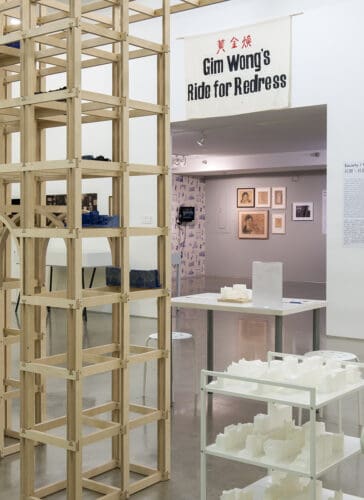 Photo of ‘Whose Chinatown?’ Exhibit at Vancouver’s Griffin Art Projects

In your words, why is this project so important right now?

In the context of rising Anti-Asian sentiment during COVID-19 it’s interesting to consider one of the earliest examples of Chinese-American architecture: the Chinese Village and Theatre Pavillion at the 1893 World’s Columbia Exposition in Chicago. To understand this pavilion, it’s important to understand what story this pavilion was intended to convey, and more importantly to whom it was being told. Following the United States’s extension of the Chinese Exclusion Act in 1892, the Qing government withdrew its support from the Chicago exposition. So the funding for this Pavilion was actually raised by a group of Chinese Americans. Their specific intent was to “correct the prejudices [narratives] European Americans had against the Chinese such as stereotypes that they were morally corrupt (addicted to opium and prostitutes) and agents of infectious diseases” and gain broader acceptance within mainstream society.[1]

129 years later, not a lot has changed. Chinatown is born out of resistance to displacement and in response to othering. The history of Chinatowns everywhere is about resilience and persistence against disappearance and the constant threat of expropriation. In downtown Toronto, two historic Chinese neighbourhoods have already come to pass. “The first known Chinese area in Toronto was along York St., south of Wellington; redevelopment of this area from 1910-20 forced a move to Elizabeth St. and the south-side of Queen.”[2]  Soon after, in 1947, two thirds of this new Chinese neighbourhood along Elizabeth St. (known today as “Old Chinatown”) was expropriated by city council to make way for New City Hall.[3] Following the construction of New City Hall in the 1960s, Chinatown moved, for the third time, to its current home along Spadina Ave. and Dundas Street, known as “Chinatown West”.  From 1971, a fourth urban chinatown, known as “Chinatown East” began to emerge at Gerrard Street East and Broadview Avenue in response to the increasingly unaffordable property values in Chinatown West.

Chinatowns across the country today continue to face displacement.  The othering of this community continues but under new names. More recently we might call it “gentrification”. In the context of COVID-19, we might still call it “prejudices” and “stereotypes” about “agents of infectious diseases” which has detrimentally impacted business in Chinatown not only during COVID-19, but, in Toronto, also during SARS in 2003. As history continues to repeat itself, we urgently need new frameworks for determining what is worth preserving and for understanding one another. This project explores such frameworks by asking “What is the Chinatown we wish to leave for future generations?” as well as “Who did/does/will Chinatown belong to?”.

What part of the experience of creating ‘Your Future Heritage’ has been the most enjoyable?

Something I have learned during this project, born out of conversation and dialogue is that Chinatown remains a resistance. Resistance to a mainstream way of life within which it cannot neatly fit. And in that resistance, though always dynamic and always shifting, enough room is carved out simply for life to be lived. This is what Chinatown has always been and will always be. This is why Chinatown is important, and cannot simply be preserved as such, but can be supported such that its spaces of resistance not only allow for life just to be lived but for lives to thrive.

Zhang’s work will be on view at Griffin Art Projects in Vancouver until May 1st, and then move to Toronto to be part of Myseum of Toronto’s Intersections Festival, along with five other Chinatown projects and exhibits.