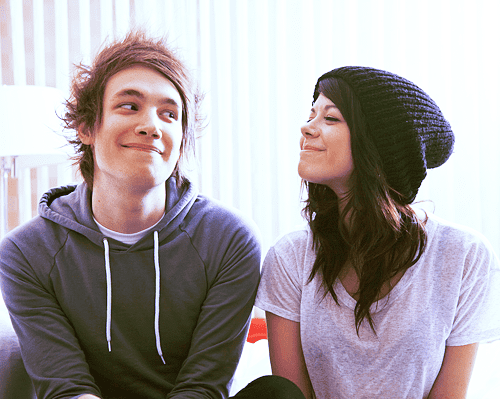 One of my closest friends happens to be an ex. Kind of. Not so much an ex as someone I would go on dates with every couple weeks and make-out with in between.

This went on for a while. A few months. Half a year of kind of dating but not really and constantly hoping it would turn into more and continuing to go with it thinking that at least having a piece of him was better than not having anything at all.

However, as I found myself crying more often than one should, I realized that if I couldn’t have the whole shebang, I didn’t actually want the half. It was fine while we were both on the same page; when we were both on-board with a partial relationship. But we clearly weren’t anymore. It felt like it was lunch time and I wanted a whole sandwich but I kept getting stuck with this tiny half that never quite filled me up and I was always left bummed out aching for more.

I was stuck in an eternal and completely unsatisfying lunchtime. (And let’s be real people – nothing is worse than having a shitty lunch & having to suffer through the rest of your day as planned).

So, we called it quits. I cried and went through the motions of wine and bubble baths and ‘fuck yous’ and mascara-stained pillowcases. Then I pulled myself together, bought a new pair of shoes to seal the deal, and moved on.

I saw him a lot. We had mutual friends and mutual interests and our lives simply happened to cross paths on a regular basis.
We immediately fell into friendship and at first it was nice. Comforting. Then it started to feel like lunchtime again. I mean, I’d get a smile and a quick update on his life when we happened to run into each other at Starbucks and I always felt a sense of relief. But then the moment would pass. We’d part ways and I’d start to miss him and I realized that now it felt like I was only getting a QUARTER of this stupid sandwich and that felt even more unsatisfying.

I accepted he was my ex and not my friend and that this particular part of my life was over. I started avoiding being around him and we stopped catching up and I gave myself the space I needed – and suddenly I felt my heart click back into place.

I ran into him almost immediately after. We smiled and laughed and caught up on our life. It was nice, and then we parted ways, and nothing felt wrong or weird or sad. I wasn’t left wanting more. I felt like I had simply run into an old friend.
Slowly our catch-ups became both consistent and intentional – only this time, there were no hidden smiles. This time if we shared a cab home, we didn’t makeout in the backseat.

But it didn’t make me sad. I didn’t want that anymore. What I wanted was simply to spend time with this person I had fallen for in the first place.

I mean, think about why we fall for someone. Sure, sometimes it’s because they’re insanely cute or say what we want to hear or simply have that shaggy hair we can’t say no to. Or maybe they showed up to the party with a giant bag of chips and your eyes immediately went ‘Bingo.’ Or maybe you both needed a rebound so you fell for each other out of convenience.

BUT. In many cases, you fall for someone because you truly like who they are. You like their brain and their heart and sure, their smile’s not bad either. So you spend time getting to know those things more. And sometimes like turns to love. Sometimes like turns to drunken dances. And sometimes like turns to 6 months of casual kind of dating and hooking up a lot. But regardless of what happens along the road, at one point it all began with you simply looking at someone and thinking Geez louise. This person is fucking amazing. So why does that have to be lost when the love falls away?

It took tears and time. A lot of time. But it was so worth fighting for because I’m so genuinely happy he’s in my life. And maybe that’s why the world brought us together. Maybe we were always intended for friendship, but we just had to take a weird little route to find it. And I think this is a really beautiful and comforting thought – that everything really does happen for a reason, and when I inevitably get hurt again and go through another load of mascara stained pillowcases, I can know this isn’t worth losing myself over. I know it’s happening the way it should, and catapulting my life into something better.

I have a lot of friends (I know, I know – get over yourself Leah). I suppose I’ve simply been lucky enough to meet an insane amount of wonderful people in this world. But he is someone in this bunch who I will always hold onto. He makes me smile when I’m not feelin’ it and inspires me to live my life however the fuck I want to. He, more than anyone else, makes me feel completely free.

I have no desire to hold his hand anymore, but I have every desire to talk to him. Constantly. Because I love the person he is. And I’m so grateful that the world threw us together.

People always say you can’t be friends with your ex – and sure, I have a few exes I will never be friends with. It was too messy or it’s too hard or we’ve both simply moved on to different places in life. But in this particular circumstance, this kind-of-ex transitioned into one of my closest friends. And the journey was weird but it was so insanely worthwhile.

So. Moral of the story? It’s okay to sleep with your friends because it will still work out in the end.

Moral of the story is sometimes the love ends but the like continues. And sometimes hearts break but something even better comes from it. So laugh and cry and take your time. Maybe even give yourself a few days in sweats and a few cartons of cookie dough ice cream. But don’t get too lost – because something even better is coming your way.

Tags: Exes, falling out of love, like, Love, Relationships