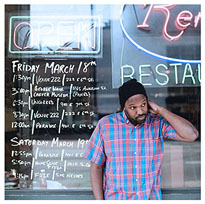 Prolific Canadian hip-hop artist Shad was recently on the west coast for his 2011 tour.  His third album, TSOL, was awarded Canada’s highest hip-hop award at the Junos this year, beating out international darling Drake.  Shad’s witty, thoughtful lyrics and interesting beats have appealed to underground hip-hop enthusiasts for years.  With his latest cross-Canada and US tour, he’s reaching out to a wider audience and building a reputation that packs his shows.  She Does the City had the chance to chat with Shad before his show at Fortune Sound about his on-stage persona and the role of women in hip-hop.

Does Toronto have a sound? In her film Step 1, Carlee Diamond explores Hip Hop in The 6ix