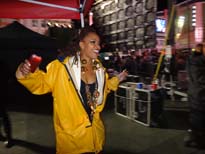 Michie Mee (Michelle McCullock), also known as “Canada’s Hip Hop Queen,” is a multi-JUNO-nominated hip hop artist, actress, and dedicated mother. The first Canadian rap artist in history to sign with a major record label in the US (First Priority/Atlantic Records) in 1988, she continues to be an inspiration to musicians across the nation.

Music lovers know Michie for her distinct rap style, combining reggae & dancehall with hip hop. Throughout her career, Michie has demonstrated her skills as a versatile musician, performing with notable artists including Will Smith, Salt-N-Pepa and LL Cool J, and touring with Queen Latifah, Sinead O’Connor, and hip hop power group Public Enemy.

Beyond her musical talents, Michie is also co-host of Canada’s legendary rap radio show, “The Power Move Show,” on CKLN Radio in Toronto, and a personality who has appeared in various programs and films, including “La Femme Nikita” (CTV), “Soul Food”, and “In Too Deep” with Omar Epps.

Outside of her career achievements, Michie is a mother advocating the importance of education. She continually contributes to youth development and is often invited to host events due to her vibrant persona. One such recent event was the sixth annual Toronto Manifesto Festival of Community & Culture, where She Does The City had the opportunity to chat with Michie about the future of women in hip hop.

SDTC: As the first Canadian rap artist to sign with a major record label in the US, you are recognized as a national hip hop pioneer. With over two decades in the entertainment industry, how do you feel the visibility of female hip hop artists has evolved in Canada and around the world?

Michie Mee: It’s obvious we need more and we need more balance of not just one or two females noted or with buzz. It would be really cool to see more types/different images and visions of female artists to rep a wider range of the unique women out here.

SDTC: You have shared the stage with other successful female rap artists. How do you think that female artists can work together to achieve a shared collective presence in hip hop – both on a local level and internationally?

Michie Mee: It’s always a treat to be around and perform with successful artists, especially when you’re just starting out. Manifesto puts new and seasoned artists in an all-female cypher mixing R&B & Hip Hop genres – doing that on a mainstream level touring with full individual shows from each artist would be the coolest & most fun!!

SDTC: Over the past six years, how has Manifesto given female artists – across music, dance, and artistic genres – the opportunity to share their talents and build with other artists throughout the festival?

Michie Mee: Beyond what the Manifesto game changers have done for female artists, they’ve also introduced us to painting/graffiti artists to network, and art is so essential in documenting our times. Manifesto involves many generations to see what the younger positive thinking youths are into and to increase faith in their future.

SDTC: What does the future of women in hip hop look like to you?

SDTC: What advice would you give to aspiring female hip hop artists in Canada?

Michie Mee: Know yourself  and be yourself! Have fun for heaven’s sake! Fulljoy the ride!…while mastering your skills!

Michie Mee’s reign as Queen is far from over… stay tuned for new music from Michie Mee with NEW double EP Releases coming in November!

Our Pick of the Week: Drunk Feminist Films Presents Set It Off