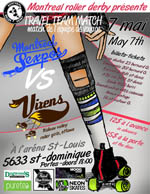 Thursday May 5 to Saturday May 7

Right By Midnight + Half Baked @ L’ESCO Bar
Indie Montreal presents Ottawa rock and roll band Right By Midnight, playing tracks off their debut self-titled album, and joined by Montreal’s Half Baked (the band, not the Sundays-on-Mont-Royal demographic).
$6 in advance, $8 at the door. 8:30pm. L’ESCO Bar – 4467 St-Denis.

Saturday May 7 and Sunday May 8

2011 Jane’s Walk @ 25 Montreal Neighbourhoods
Each year, Jane’s Walk celebrates the ideas and legacy of urbanist Jane Jacobs through neighbourhood walking tours held on the first weekend of May, and led by locals who want to create a space for residents to talk about what matters to them in the places they live and work. Participate in a Montreal walk this weekend!