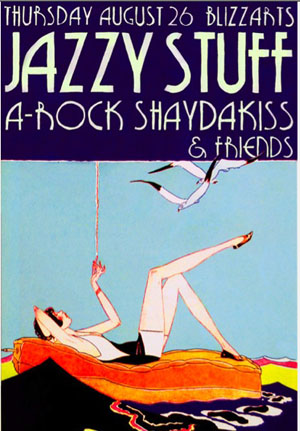 Pie Bakin’ Contest @ Korova
Korova’s Big Fun hosts their annual pie-bakin’ contest! Here’s how the evening will  run:
– 10 PM: Submit your pie
– 11 PM: Judges taste pies
– 12 AM: Winners get prizes
– 12:01 Dance party!
Fun prizes, cash money, glitter, fake gold and Dollarama stuff! Hopefully there will be enough pie left over for non-judges to have a taste! With DJs Emily B. and Annie Q. 10pm to 3am. Korova – 3908 St Laurent.

Jack Dylan Retrospective @ Red Bird Gallery
For six years, the artist Jack Dylan has used illustration and poster art to document the city of Montreal. To mark the end of that collaboration, a retrospective exhibition of Dylan’s posters and drawings will be held at the Red Bird Gallery. Prints and originals will be available for purchase and an artist talk will be presented at 8pm. Show runs until Sept 6th. 7pm to 12am. Red Bird Gallery – 135 Van Horne O.

SATE Is Trusting Her Intuition and Revealing Dirty Little Lies

RUMBLE: The Indians Who Rocked The World Comes to TIFF Bell Lightbox