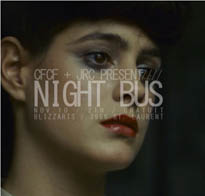 Colours of India @ Musée Pointe à Callière, 350 Place Royale.
Pointe à Callièr, the Montréal Museum of Archaeology and History, presents an exhibition of Indian life, artistic expression, and culture. The exhibit features fifty photographs by Suzanne Held along with objects from the collections of the Musée Guimet in Paris. Show runs until April 22, 2012.

7pm You are a Cat! @ Librarie Drawn & Quarterly, 211 Bernard Ouest. Local writer and artist Sherwin Tjia launches his graphic novel at D&Q. Inspired by the Choose-Your-Own-Adventure books of the late 80s, YOU ARE A CAT! is both a parody and homage, focusing on a dysfunctional family through the eyes of their cat.

8:30pm Adam & The Amethysts Album Launch @ Sala Rossa, 4848 St Laurent. Montreal pop group Adam & The Amethysts are back from their first round of fall tour dates and are ready to finally celebrate the release of their new record, “Flickering Flashlight” in their home town. With Elfin Saddle. Tickets $10.

9pm Girl Party Two @ Piscine Publique, 2915 Ontario Est. 2010’s Girl Party One had 350 people gathering in a loft in Griffintown. Now, local act Girl is at it again, with a wintery pool party in HOMA. Featuring performances from Girl, DJ F.U.N.K and DJ BRUNO B. Judging from the promotional video, you should wear something that looks good wet. Boys and girls sporting Mo’vember moustaches (real or not) get a free shooter. Tickets $20.