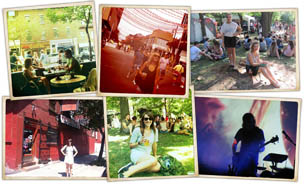 Montreal Road Trip to Osheaga 2011: Our favourite moments including Ratatat, Beirut, The Big Apple, Brunch, and walking across bridges

It’s not every day that Chevy calls you up and is all “Hey guys, want to borrow a car and take it to a super awesome music festival?” Um, yes, one thousand times yes! So we hit the road to Montreal and Osheaga 2011 in a Chevrolet Cruze (which we nicknamed the Chevy Chase). With the help of a very patient OnStar lady (“Oh, how funny! Someone’s asked for directions to that same hotel three times in the last hour! Must be busy!” “Er, yeah…that was us.”) and the Grateful Dead Sirius XM radio station (how we will roadtrip from now on without a constant supply of Jerry we do not know), we proceeded to storm the 514. Below, a round up of our favourite moments from the weekend.

Road trip stop to feed some llamas at The Big Apple
No trip east of Toronto is complete without stopping en route at the Big Apple, making fun of the bizarre collection of wonders (foliage suits, anyone?) they have in the gift shop, and buying a container of animal feed for the sheep and llamas wandering in the pens outside. I’m pretty sure that, in a crowd that was 90% seven year olds, we were the happiest animal feeders there.

Brunch at Laika on St Laurent
Tucked in a soothing, stripped-down-cool industrial space on St Laurent, Laika serves up some of the best brunch we’ve ever had. Creative benedicts, good vegetarian options, great coffee and friendly, hard-working staff made this the perfect place for morning people watching, and the large, open window gives you a great vantage point for St Laurent street traffic. Rumour has it that at night, they feature some of the best DJs in the city. We’ll definitely be going back.
4040 Blvd Saint-Laurent

Ratatat at Osheaga
On Saturday night, it felt like the entire festival crowded Scene Verte for Ratatat’s set. Complete with giant video screens projecting eerie bird’s heads and gold chains, and an insane light show, the guys short set was near-perfect, wowing fans with their musicianship and stage presence. Live, their sound takes on a heft reminiscent of The Mars Volta, but sacrifices to that weight none of its energy. The secluded forest stage, surrounded by Parc Jean-Drapeau greenery, added to the surreal vibe-so did the steady stream of people climbing a tree to get a better vantage point.

Patio beers in the Gay Village
All done up for Divers/Cite, Montreal’s Gay Village on Ste. Catherine was a pedestrian-only funfest this weekend. Patios extended into the streets, which were hung with pretty pink lights. People dressed in everything from tennis whites to studded leathers strolled up and down the strip, and brought puppies to say hello on crowded patios.

Walking The Bridge to Parc Jean-Drapeau
While it’s easy as pie to get there on the Metro, we were up for something a little more exciting before Osheaga on Sunday. We decided to walk to the festival over the Jacques Cartier Bridge, which makes for great views of the Saint Lawrence river and the city. Pedestrian access is at Notre-Dame and Lorimier.

Beirut Playing in the Sunset
The nostalgic European pop-folk created by a band from Santa Fe seemed absolutely perfect performed on the side of the St. Lawrence in Montreal as the sun was setting. The river reflected the skyline as Beirut’s horns soared across Parc Jean-Drapeau, making it one of the most memorable sets of the weekend.

Dinner at Le Hangar
Music festivals, at least for us, are usually synonymous with hot slices of pizza eaten while running between sets and spilling lukewarm beer on our sandals. Not so when you’re festival-ing in Montreal, where delicious restaurants are just across the river. We finished up our weekend with an amazing meal at Le Hangar, an airy new restaurant from chef Louis-Francois Marcotte. The impressive wine list and creative, varied menu in the beautifully designed space made for a great meal. Standouts included delicious arancini, scallops, and octopus.
1011 Rue Wellington