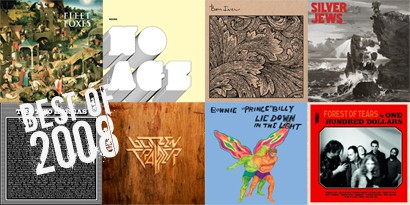 After 22 years in the biz SubPop seem to have a firm understanding of the record industry as demonstrated in 2008. The people who brought you grunge in the early 90s via Nirvana, Soundgarden and Mudhoney had a banner year for breaking great new acts. And with the Major Label honchos complaining about ever-declining sales and the ubiquitous IPod, the smaller players in the music world have been making a huge mark and changing the way things are done. 2008 was another fantastic year for compelling releases from North American independent record labels. Here are 8 reasons why:

Fleet Foxes: Fleet Foxes (Sub Pop)
Is the new Seattle more Pet Sounds and less Rust Never Sleeps? Could FF be the new Arcade Fire? These layers of instruments and voices that combined with near-perfect pop sensibilites to create harmoniously lush textures that seems to point to the answer as being a resounding yes. Indie kids of all ages have been swooning to this music all year long. There are big things ahead for this 5-piece band who describe their music as "baroque harmonic pop jams".

No Age: Nouns (Sub Pop)
If you’ve ever felt like you were born too late to take part in all the really cool underground scenes of the past then maybe its time to pack it in, go to Cali and hang around the Smell – a DIY punk club in downtown LA. No Age are the soundtrack to this community hub where art meets punk meets noise. Neat two-piece band making a beautiful racket.

Two Koreas: Sessions EP (Unfamiliar Records)
Digital/vinyl only release from Toronto’s "band of critics" transports us back in time to a late-70s England where Johnny Rotten’s PIL and Mark E. Smith’s The Fall battle it out in clubs and on the stage for the title of post-punk king-of-the-world. Sweet EP with awesome artwork as well.

One Hundred Dollars: Forest Of Tears (Blue Fog Recordings)
Heartbreaking country-folk music the way it should sound. Honest, contemplative and transcendent. $100 are the coolest band in Toronto! Produced by Rick White of Eric’s Trip and Elevator fame.

Silver Jews: Lookout Mountain, Lookout Sea (Drag City)
Another brilliantly executed SJ record from Austin’s poet laureate David Berman. Once again we are bombarded with a litany of songs that are at once funny, poignant, romantic, spiritual and tragic! Also – their live show at Lee’s this past summer was a-mazing.

Bonnie Prince Billy: Lie Down In the Light (Drag City)
Will Oldham rarely disappoints but with the bar set so high from past releases this one seems to surpass his previous brilliance and sits as an unexpected jewel in the Palace crown. Rootsy and sprawling, the songwriting has never been better and the singing never so impassioned. A true gem.

Blitzen Trapper: Furr (Sub Pop)
Portland, Oregon’s latest trailblazers sound like they had the Dylan/Band Basement Tapes on heavy rotation leading up to recording Furr. Beautifully layered folky rock with superb attention to songwriting, melody and those little details that slowly reveal themselves over time make this a very rewarding listen again and again.

Bon Iver: For Emma, Forever Ago (Jagjaguwar)
The last one was a good winter for at least one Wisconsin native – Justin Vernon aka Bon Iver came along as one of this year’s biggest surprises. After a massive outpouring of love from the most infuential critics this soulful singer-songwriter has won over fans here and abroad – a great young torch singer armed with a falsetto vox and an acoustic guitar Bon Iver is poised to take over the world in 2009.