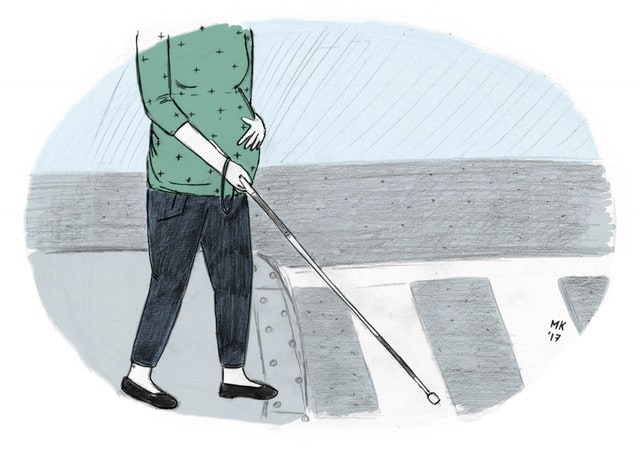 “So, how’s that whole thing working out for you?”

I look up from my phone to see a grinning jerk begging to be put in his place. The kind that probably has three friends named Aiden and owns a puka shell necklace. Yeah, that type.

Grinny McGee stumbles a bit. “Blind, pregnant…was it an accident?”

“You, sir, are about to have an accident if you don’t get off the streetcar at the next stop. Your call.”

Obviously, a white cane/baby-carrying woman got herself into some trouble because someone lied and didn’t actually put on a condom. If I were that irresponsible to trust a one-night stand to slip on a rubber, then I definitely am not ready to have a kid.

I’ve been with my straight, male partner for six years, married for three. We both with stable jobs and a deed in our names. However, my lil deviation comes in the form of a visual impairment (yes, the CNIB ensures the white cane is the international symbol for vision loss, not just blindness). This makes life just a little more exciting as I pass people on the bus and watch them grit their teeth as they recognize the naturally unplanned predicament in which I’ve found myself.

I don’t know what people expect, though. It’s as if I’m supposed to dwell in the Land of Partial Vision for the remainder of my life and assume survival should be my only goal. “Survival,” though, is hardly the issue. More like a bruised kneecap here and there. In the minds of those who look at me with that pained expression of “Oh, what is that poor invalid going to do?” I should have accepted my fate, retreated to a one-bedroom basement apartment in Etobicoke, wrapped myself in an afghan and let my eggs go bad like potato salad left out at a Midwestern picnic.

So, yes, someone did agree to marry me, fuck me (quite competently, I might add), and make a plan with me to procreate. Come what may, I suppose.

Of course, I have a few tricks planned – fluorescent jackets at the park with sewn-in jingle bells, doing puzzles in an empty bathtub, and labelling EVERYTHING, but in all honesty, what expectant parent knows exactly what kind of parent they’ll be once their bundle of poop arrives? Maybe I should be flattered by the higher standard to which strangers hold me, but I don’t expect to have all the answers. Who does? And why should I?

In critical disability studies, we see two major models in modernity regarding how people with impairments and/or disabilities are perceived: the charity model and the heroic (the latter often referred to as the “super-crip” model).

Pity tends to come from a religious influence in the Middle Ages that turned people off of fear, hatred, and punishment of people with disabilities. So, thanks for that, I guess. The religious lens can also view disability as an act of God; something that the carrier or their parents did to upset the holy balance of good and evil, and disability is retribution for that.

The other model (the heroic) is becoming more mainstream, belonging to youth and the secular world: the idea of the “super-crip.” This leads to such phrases as, “Wow, you have a job?” “You brush your own teeth?” and “It’s so cool that you have a girlfriend!” Simply put, this lens repackages normalcy and the mundane to be heroic for people who they’ve underestimated.

This is where I differ, though. I understand, forgive, and do my best to find teachable moments on the reg. If I’ve changed one person’s way of thinking in my lifetime, it would have been worth it. Call me Mother Theresa; however, even Mother Theresa has her damn limits.

What I can’t tolerate are the comments or gestures that bear no reasonable answer from me but “How am I supposed to respond to that?” An exceptionally thick-skulled Neanderthal of a man asked me if I knew that I was pregnant. If I knew. As if my lack of 20/20 vision precludes me from being aware of gestation happening within the confines of myself. I asked him, “How am I supposed to respond to that?” He didn’t have an answer but was ready with a shrug and an eye-roll, the likes of which would make Liz Lemon writhe with envy.

So I told him. I told him in detail. I first suspected something was up when my spouse and I had unprotected sex. Then, my boobs started to hurt when I put on a bra in the morning. I really started to catch on when I got a positive pregnancy test. And of course missing my period clinched it, too.

I’m certainly not alone on this. I’ve heard many stories of other women with disabilities more visible than my own and the stigma they’ve encountered during pregnancy via their social circles, families, and even the medical system. One story comes to mind of a former colleague who was in the process of searching for an OB/GYN with his wife, who uses a wheelchair. Their major challenge was finding a doctor that would look his wife in the eye, let alone address her on matters when it came to her own health and family history.

No, I have no idea what my parenting style and tactics will look like. It has nothing to do with my vision. It’s about my humanity. The only thing I know for sure is that I’m going to be an incredible parent, without question. No one can take that from me.

Also, if you’re reading this and you’re pregnant now, nothing deters people from touching your abdomen without asking more than licking their hand. Trust me, it works.