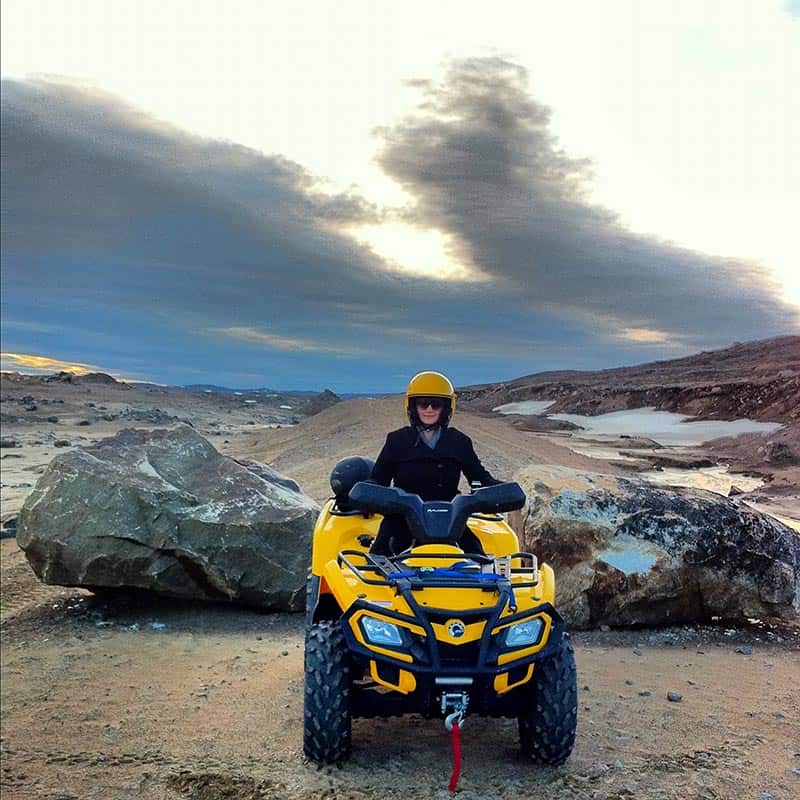 "That’s what my friends and I call 'Yukon sexy.' Because sometimes a gal just needs to know how to rock a pair of long johns and a mad trapper’s hat."
Life Stories

In the Northern territories, New Years looks a little different than it does on the edge of the American border. It’s too light out to have fireworks on Canada Day, so they really go to town for New Years Eve. In the bigger cities, your options are usually two different parties, where you will know absolutely everyone. Or, you can hightail it to a secluded cabin in the woods, and ring in the New Year while snowshoeing under the Northern Lights and drinking hot chocolate naked in a hot tub. According to Samantha Dawson, a Nunatsiaq News reporter born and raised in the Yukon, if you’re heading to the bar, you’re definitely going to be putting on snowpants and your Sorels before trekking home, and the ex-boyfriend count is going to be off the charts. But it’s these, and so many other, quirks of Northern life that draw people to the area. “I feel like instead of going to India to find myself, I went here,” says CBC journalist Meghan Roberts (uv8 CS5{ in Inuktitut symbols.) “Nunavut is the new India.” 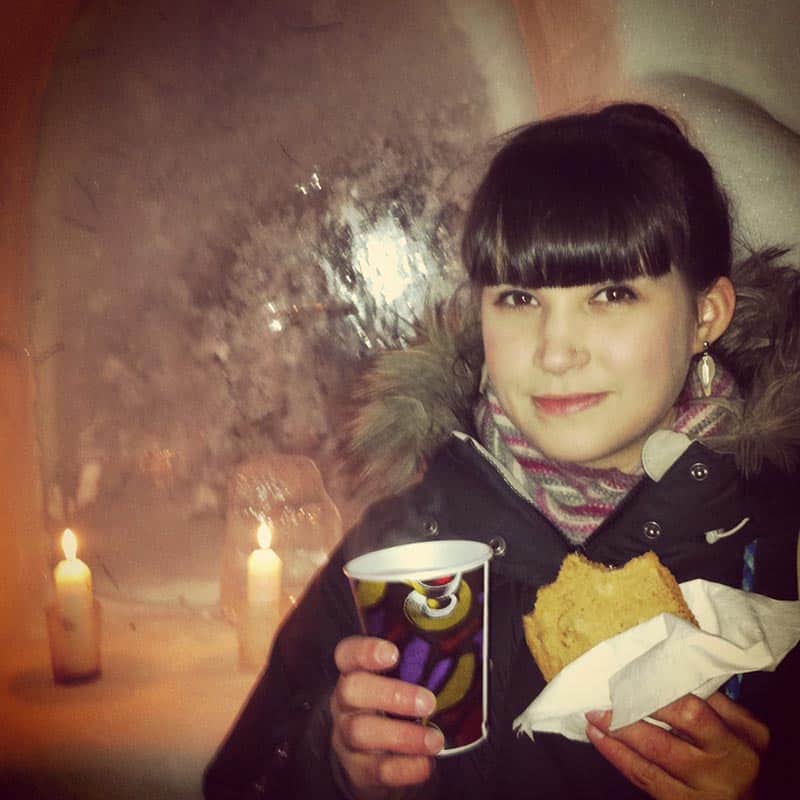 Meghan at the ice palace in Yellowknife

Dawson and Roberts are only two of many young journalists have migrated, or returned, north to cover a region that makes up much of our land mass but little of our media coverage. Jobs seem more available in the north, and working with a smaller team means more opportunity. Moving to Yukon, Northwest Territories, or Nunavut from Vancouver, like Roberts, or Ottawa, like Laura Wright, also a journalist with CBC, immerses you in a cultural dialogue that might just define what it is to be Canadian, highlighting how different life can look from the far-apart corners of our country. Of course, living in each of the territories, as these girls have done, leads to the inevitable discovery that they are, in fact, unique unto themselves. “Yellowknifers tease Whitehorse for being ‘northern-lite’ or ‘Vancouver North,'” says Wright. “This might have something to do with the fact that there are two Starbucks outlets there.” 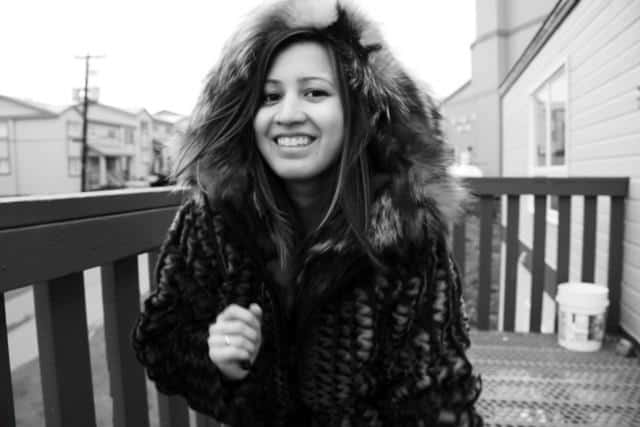 For Wright, the first thing that struck her about life in the North was the light. When she arrived in Yellowknife in July, the sun set around 11 pm and rose at 2 am. Right now, daylight only lasts from 10 am until 3 pm. (Hello, naps.) In the north, New Years fireworks are augmented by the Northern Lights. “People head out to their cabins, which are usually isolated in the woods,” says Dawson, who now lives in Nunavut. “Of course, you lose the glamour of New Year’s Eve, but that’s what my friends and I call “Yukon sexy.” Because sometimes a gal just needs to know how to rock a pair of long johns and a mad trapper’s hat.” 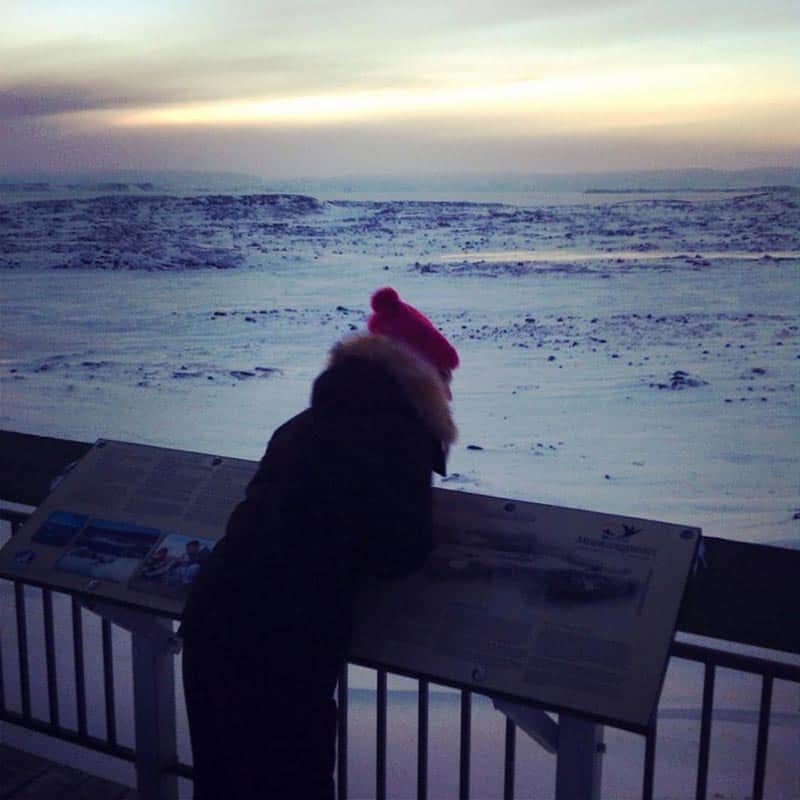 According to Wright, this version of sexy also involves a lot of clothing swaps, since sartorial options are harder to come by up north. And Roberts says that bare legs are never off the table in Iqaluit-even in -40. If you’re headed out to the Storehouse, where local bands sometimes play under the watchful lack-of-eyes of a headless taxidermied rabbit, a glass of wine by the fireplace is going to cost you $15, to wash down your $30 nachos. “Food is expensive up here,” says Dawson. There’s no liquor store in Iqaluit, and New Years parties happen at places like the Legion. “I like to call it the most exclusive bar in Canada,” says Roberts. You need a member to sign you in. “It’s the place to be for dancing and debauchery in Iqaluit,” she says. A coworker likens it to a wedding reception. 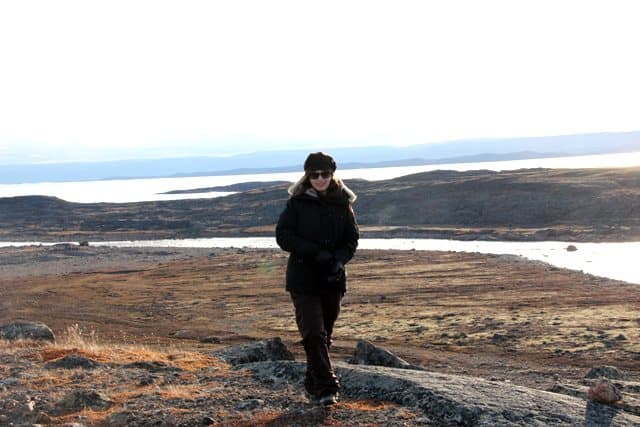 Sam taking in her native landscape

But traditions in Nunavut, in particular, are shifting. Roberts is hoping to take in the annual Iqaluit snowmobile parade on the Frobisher Bay sea ice, but due to climate change, the ice wasn’t solid enough by Dec. 31st to hold the parade last year. Nature is something you can’t ignore in the North, even if you want to, and many New Years traditions involve the outdoors. Iqualummiut love to have bonfires. There are no trees to worry about.

New Years in the North is all about reconnecting with friends, says Dawson. In smaller communities like Mayo, where she grew up, people gather in town halls and listen to local musicians. “You get a mix of everyone from kids to old people and it is quintessentially Yukon,” Dawson says. Roberts remembers a similar age mix from her time in Yellowknife. “Never before had I been in a bar with a 90 year old granny pounding back Canadians faster than my entire table,” she says. But perhaps Dawson sums it up best. “The New Year’s spirit is the same, everyone looks forward to new beginnings. I just don’t know if waking up to frozen water pipes is a sign of the good things yet to come, or if it’s just another reason to get help from my neighbour, who, for better or worse, I’ve known since kindergarten.”

"That’s what my friends and I call 'Yukon sexy.' Because sometimes a gal just needs to know how to rock a pair of long johns and a mad trapper’s hat."