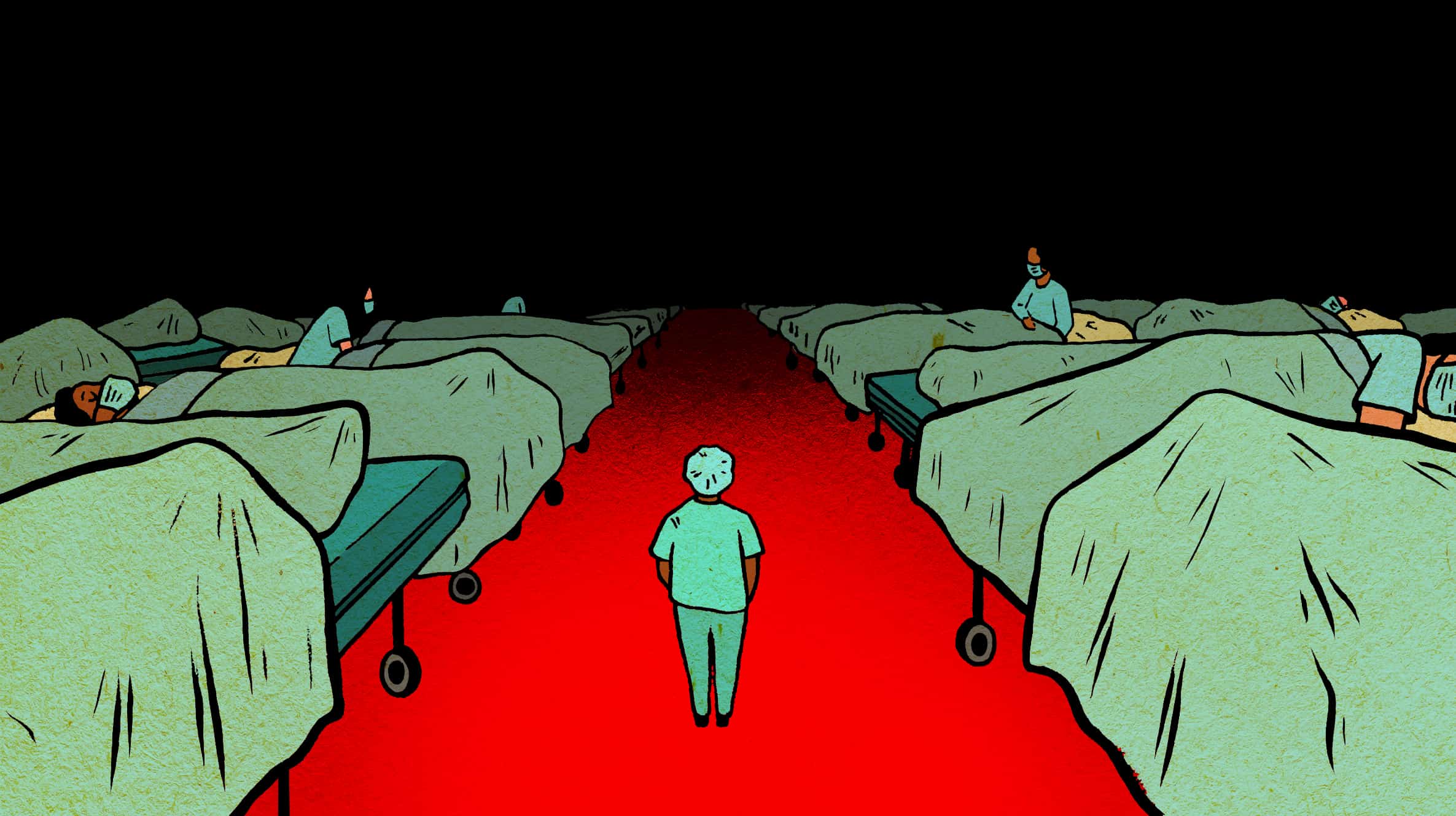 "People need to start yelling. They need to start screaming. This is your healthcare. You pay for it. Having someone on a stretcher in an emergency room for 90 hours waiting for a bed upstairs is not acceptable."
Life Stories

Nancy Halupa is an RN who works in the emergency department of a hospital in the Greater Toronto Area. She is one of the nurses who created the Nursewithsign416 campaign to repeal Bill 124 – which caps compensation increases for nurses and other healthcare practitioners, among others, at 1% per year for three years – and educate the public on the dangers they face because of the nursing shortage. She has been a nurse for 23 years. Nancy recently stepped away from advocating for her profession after being assaulted by a patient.

Bill 124 finally made me realize how disrespected and undervalued my profession is. There’s no incentive to stay.

I’m the least politically active person – I knew nothing about politics before any of this – but I’ve gone decades without a wage increase. We worked so hard during that first wave; everyone else was locked down and we were going to work. And that’s the reward we got. And you can’t just go on TV once in a while and call us heroes and think that’s sufficient. We’re not children. We don’t need to be placated with nice names and a pat on the head.

The fear of getting sick is a bit better for me now, but those first couple months were terrifying. Most of us were living in separate rooms of our houses, taking our clothes off outside before even walking into the house. It was horrible and lonely. I was living in my house with my husband and my two kids, but I was using my own bathroom. I was sleeping in the basement. I didn’t want to be near any of them. I would eat my dinner separately. I wouldn’t cook because I didn’t want to touch anything. It was a really isolating existence.

But I don’t feel much safer now. I’ve had my booster; my husband and my daughter just had it. My son doesn’t qualify yet. But I always have in the back of my mind all of those patients that I had that died, and every time I look at my family, I just picture it being one of them. So I’m still very careful with washing my hands and not bringing anything from work inside my house. And it’s still scary.

People are coming in significantly sicker than they ever were. And with this wave, we’re seeing a lot more kids getting sick and we don’t have the nurses anymore to keep up with the workload. We’re five or six nurses short some nights, and that’s five or six nurses that we have to pick up the slack for. So we’re not giving our patients the kind of care that we want to give them and the kind of care that they deserve.

Some of the shortages are due to sick calls, but a lot of it is because nurses quit. The assignments are never filled to begin with because there’s no staff. So add the sick calls on top of that and we’re basically running with nurses from agencies. So that was a slap in the face for all of us.If you’re paying these agencies upwards of a hundred dollars for these nurses who can’t work in every single area, who can’t take on certain roles in the department, then you can afford to pay me the same. And every hospital is using private agencies right now. I don’t think there’s one hospital in Ontario right now that’s not functioning on agency nurses.

I worked last week and I had five kids under the age of eight months that were really sick. And there’s 93 pediatric ICU beds in Ontario. What’s going to happen if these kids start to get really sick? You can’t just turn an adult ICU into a pediatric ICU. The nursing is completely different. The government has made it sound like a nurse is a nurse. Well, a nurse is not just a nurse. Who would you rather start your child’s IV? Me, who’s done it for 23 years, or the psychiatric nurse who’s been redeployed to my department who hasn’t done an IV on an adult? There are different skill sets for all of us.

Ontario’s on fire right now, but I don’t think people see it unless they’re involved in it. They drive by an emergency room or a hospital and it looks quiet, but that’s the front of the department; they haven’t even entered the actual emergency department yet. And by the time you’re a patient or your family member is a patient it’s too late to do anything. So people need to start yelling. They need to start screaming. This is your healthcare. You pay for it. Having someone on a stretcher in an emergency room for 90 hours waiting for a bed upstairs is not acceptable.

Wait times are significantly higher now. If we have to close beds in the main part of the emerge then all the patients go to the ambulatory areas. So you’re putting sick patients in areas where they probably shouldn’t be, and then praying to God that you can empty out a stretcher in time to get them into the stretcher if they need it. I’m in charge a lot. If I have no stretchers left, I’m on pins and needles the whole time because I don’t know what’s going to come in. Somebody could walk in who needs that stretcher. You just don’t know. If someone has COVID we try our hardest to keep them separated, but there’s only so many isolation rooms available in the emergency. And if there are no beds upstairs on the COVID floor, they stay in emerge.

We don’t just focus on the patients that have COVID or we suspect have COVID, we have a lot of other sick patients; COVID is just amplifying how busy we are. But we’ve become these patients’ only family because they’ve stopped letting family members in, so emotionally the job has gotten significantly harder. I went to emerge specifically because I was very softhearted and I couldn’t deal with getting to know my patients up on the floors and having them die. But this past year, I can’t even tell you how many times I’ve sat with someone because no one else has been there. It’s an honour to be that patient’s family member for that time, but it takes a lot out of you. You don’t have much left at home.

I don’t think there’s any therapist in the world that will ever understand what this has been like. So the family you make at work, especially this past two years, that’s what they’re for. Your support at work is incredible with nurses, so we talk to each other because no one else is going to understand.

This interview has been edited and condensed for length and clarity. To see more interviews in this series, go here.

"People need to start yelling. They need to start screaming. This is your healthcare. You pay for it. Having someone on a stretcher in an emergency room for 90 hours waiting for a bed upstairs is not acceptable."