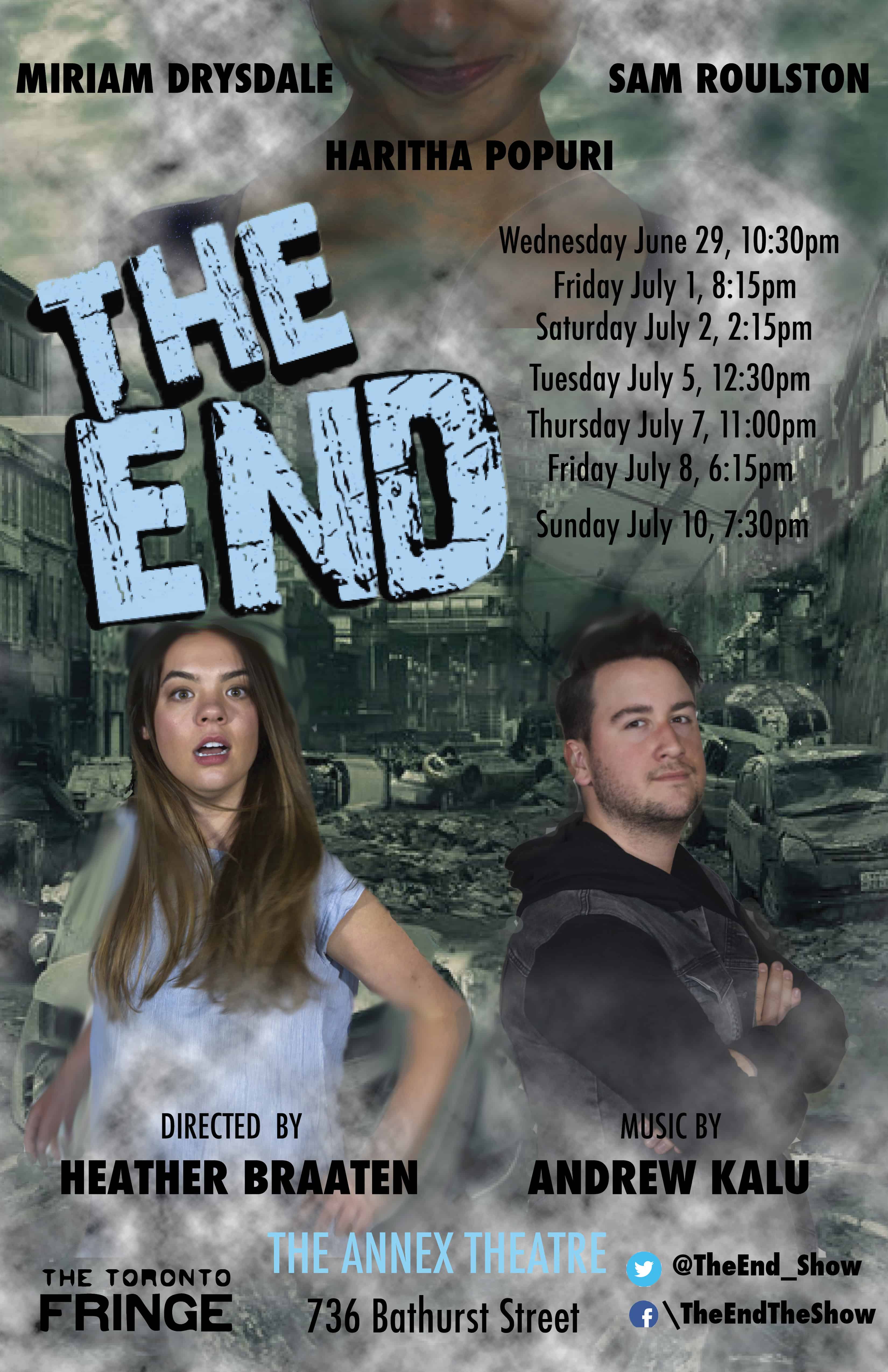 Toronto Fringe Festival is a trove of incredible theatre. We’ve chosen some of the best playwrights and directors from this year’s festival to find out what makes them tick, and what you can expect to see this year.

For this installment, we spoke with writer, actor and producer of The End: A Musical Tragi-Comedy, Miriam Dysdale.

SDTC: What’s your play about?

MD: The End: A Musical Tragi-Comedy takes place one hundred years from now. Our modern world has been changed beyond recognition. The rich are impossibly elite, and the poor barely survive. Don’t even try to leave your house – if a postal drone doesn’t blow you up, the armed guards will brutalize you, and with the Locusta Virus medication impossible to afford, it’s best to fly under the radar leading up to the coming apocalypse. Auggie Storm does just that, until the ordinary day when the impossibly optimistic Bernadette Farnham shows up on his doorstep with big plans. Bernadette leaves her safe country home and moves to Metrocity in search of the spotlight. Instead she finds an Orwellian chill, and a government stifling any chance of making art. Will she get to perform before the apocalypse hits? Will Auggie return to his closed-off and unhappy existence? And, um…is it really the End of the World?

What led you to come up with the concept?

There’s no stopping the end of the world: the sun will explode in five billion years, but we’re going to ruin the planet long before that. The End was inspired by The Walking Dead, The Hunger Games, Mr. Burns: A Post Electric Play and Station 11 by Emily St. John-Mandel. I drew some recognizable motifs from these works. The end is inevitable – it’s fascinating and terrifying and I wanted to explore it myself. 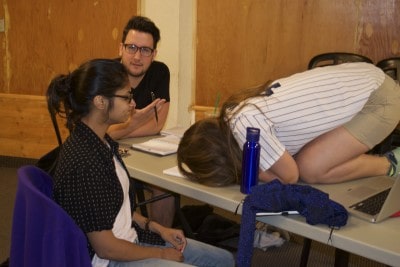 What have been the most challenging/rewarding aspects of putting this together?

The most challenging aspect is that I’m in the crazy position of being writer, actor and producer and it’s such a major juggling act – trying to keep track of the details and not drop the ball! And as soon as I get something under control I realize there are seven more things waiting for my attention. I forgot to pee today for like hours. HOURS. But of course I’m not doing it alone. I’ve been able to call on some terrific and talented friends and colleagues to help this come together. My hilarious castmates Sam Roulston and Haritha Popuri, brilliant composer Andrew Kalu and dedicated director Heather Braaten are working just as hard as I am and that’s the most rewarding part – having these gifted people take this on with me. Sometimes I catch myself thinking, “How did I get so lucky?”

I think the world has become scary and depressing. I mean, the Donald Trump debacle is not funny – it’s terrifying. And so much horror. Gun craziness, bigotry, Zika virus and war…and Britain: *What* have you done? It would be easy to slide into despair and give up hope, but we are so resilient as a species. We’re so hopelessly optimistic things will work out that there’s always a reason to sing. So I hope people will laugh and have a good time and will leave thinking about how tough, and hopeful we really are as a species.

The End: A Musical Tragi-Comedy is playing now until July 10 at Annex Theatre. Get your tickets here.

Tags: fringe, Miriam Drysdale, On The Fringe 2016, The End