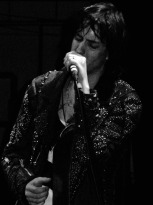 One Stroke and Some Synths: Julian Casablancas at Kool Haus

Words and Photo By Ivana Markotic

Four years have passed since The Strokes last album, First Impressions of Earth, was released. Since then, most members of the band have focused on side projects, including lead singer Julian Casablancas, with his solo release Phrazes for the Young.

Well, one Stroke is better than no Strokes. On April 2nd, Casablancas brought his solo tour to Toronto. The show was originally set for the Phoenix but moved to the Kool Haus due to popular demand (read: more Strokes fans than expected in TO willing to pay $40 to see one Stroke perform).

A departure from The Strokes “sound,” but with the promise of Casablanca’s voice and synth laced songs, Phrazes for the Young translated well on stage. Except– there was only about forty minutes of content from the album. Think quick, JC! Oh right, there’s that incredible catalogue of songs from your three studio albums with The Strokes! Most of the crowd probably would have left a little pissed if they didn’t get to experience at least one Strokes’ song live. A reworked slow tempo of “You Only Live Once” and the beckoning dance-along “Hard to Explain” were treats.

From the solo album, the single “11th Dimension” and “River of Brakelights” were highlights that were followed by a series of “fuck” and “fucking” while Casablancas (ironically, charmingly) addressed the crowd. Rooted centre stage, his tight red pants and studded leather jacket made him look like the love child of Jack White and Karen O. Humbled by the amount of people who showed up, he teased Torontonians about potentially moving to Canada, but settled on probably not being allowed in.

JC even brought a little Christmas spirit to the Easter weekend by performing “I Wish It Was Christmas Today.” But even infusing a Christmas song in April didn’t extend the set much longer; encore included, the performance lasted just over an hour.

The Strokes keep releasing videos of themselves working on their upcoming album, which only further teases their fans and builds anticipation. As Casablancas’ tour extends into the summer, the potential release date is further delayed for The Strokes material. While the concert was fun, it was short, and the most memorable moments were with Strokes material. To that I say: That’s enough Julian Casablancas, I’m ready for the new Strokes album.

From Aqua to O-Town: Your Weekly Get Lo Pre-Drink Playlist is Here!