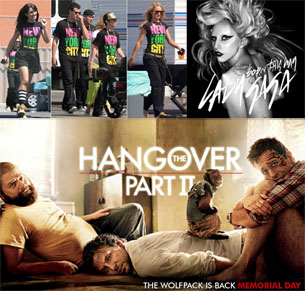 1. Britney and Rihanna Duet – Was anyone else really depressed by the “thrilling,” “shocking” performance at the Billboard Music Awards on Sunday night? Rihanna looked smoking in white vinyl as she opened the award show and surprise! there was Britney, in matching black vinyl, also looking as hot as she has in recent memory. But the two pop princesses who bookended the last decade struggled to sing their sadomasochistic anthem, barely getting the words out before they writhed unsexily on stripper poles. Blech.

2. Born This Way – after months of teases and video releases, Lady Gaga’s album finally drops on the 23rd. Thank gaga for Gaga, right? Showing certain pop princesses how you can wear vinyl, writhe around and do it with a modicum of talent to boot!

3. Glee Finale – Is Glee over? Have the McKinley kids already become passé with their incestuous dating habits and a complete lack of plot or character development? Or are you still riding the high school musical express with the kids straight to Nationals? If so, be sure to catch the season finale this Tuesday at 8pm!

4. Hangover Part II – Ahhhh! In a movie season strewn with sequels, this has got to be the most anticipated. The boys from Vegas hit the screens for a second go round this Friday. The original was the highest grossing R rated flick ever and f*&King hysterical so the expectations are pretty high. Well, they’re off to Bangkok to see if they can do it again. Holla, holla, city of squal-ah!