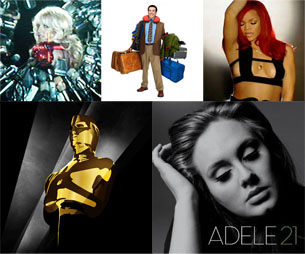 Pop5: Britney and Kanye drop new videos, Adele's new album, Ed Helms stars in Cedar Rapids and we gear up for the Oscars

Britney’s new video – I’m sorry, didn’t Britney Spears stop being noteworthy a long time ago? The last fun pop music she released was on her ‘Blackout’ album; you know, the one that she was too bald to promote and tour? Anyway, the video for her first single, Hold it Against Me, was released this past week. It’s been teased, hyped, called a ‘return to form’ and even if the bar was waaaay lower than that, it still would’ve disappointed. Product placement? Seriously Britney?? Her own fragrance line is a fairly nonsensical connection but the star also shills for Sony and dating website Plenty Of Fish in the video. The only cool part is the self-painting dress but our girl Robyn did that first in her sexy ‘Indestructable’ video. Fail Britney, fail.

Kanye’s new video – The week’s second high profile video release was for Yeezy’s ‘All of the Lights’. I adore this song; it’s the best track on a pretty stellar album. With the guest vocals of Rihanna, John Legend, Fergie, Alicia Keys, Elton John, La Roux, Kid Cudi and others, it’s pretty epic too. So I kind of feel the way you do when you read a great book and are disappointed that the movie doesn’t match the idea in your head. That being said, I don’t need to rent a strobe light for my next disco party. And Rihanna is more boob than shirt; always a good thing. What do you think?

Cedar Rapids – If you haven’t already seen this film about a small time insurance salesman who gets bumped to the big leagues (aka a tiny conference in Cedar Rapids), do. Ed Helms (of The Office and The Hangover) stars as a winning guy whose sincerity only makes the raunch delivered by John C. Reilly, Anne Heche and Isiah Whitlock Jr even funnier. Fans of The Wire will find extra giggles; shiiiiiiiit. Check out the trailer here.

Adele’s new album – I’ve already shown Adele’s lead video some Pop5 love and now the British beauty’s sophomore disc has been released. 21 hits stores today and is packed with fantastic music. Adele is one of the most stunning voices currently recording and the singer always leaves everything on the stage. Check out her raw, emotional performance at the Brit Awards last week, accompanied only by a piano. Pin drop.

The Oscars – Hollywood’s big night goes down this Sunday. My money’s on a King’s Speech sweep so the only questions that are left are who will wear what? And how will the out-of-left-field hosts Anne Hathaway and James Franco do?